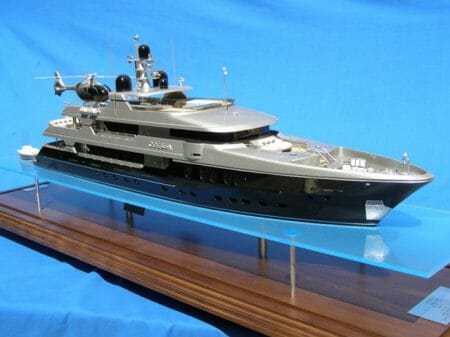 Step into any yacht-builder’s display at a major boat show, and you’re bound to see a scale model of at least one or two projects. Step aboard some of the yachts themselves, and you might also see a model, either presented as a gift to the owner or commissioned by him or her as fitting artwork.

Some of those models are made by Brian Klassen and his team at Brian Klassen Models. Located in Halfmoon Bay, British Columbia—a.k.a. the gateway to Desolation Sound and start of the Inside Passage—the models are for builders and individuals anywhere from a few hours south to halfway around the world. Indeed, the model of Christensen Shipyards’ Odessa seen above and Fitzroy Yachts’ Midnight seen below are among the many megayacht models they’ve created.

Models are more than just scaled-down, 3D representations of a yacht. They are one of the best sales and marketing tools a builder and designer have at their disposal. After all, not everyone can understand the blueprint-like general-arrangement drawings. And even though technology now allows for 3D renderings to be created and displayed on PCs, clients can’t reach out and touch them. In addition, the renderings often reside permanently in the shipyard’s or designer’s office, never coming to a boat show, where more potential clients can “get” the concept. A scale model, by contrast, lets current and potential clients better appreciate individual design elements, finishes, structures, and more, right down to winches and furnishings. 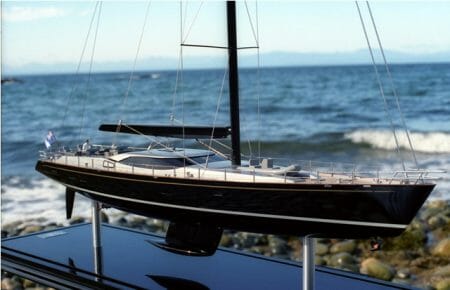 Since every model that Klassen and his team makes is done on a custom basis, Klassen says the level of detail can be pretty basic or incredibly complex. Basic models are typically commissioned by builders and designers wishing to present a concept, to gauge and attract interest. These lack deck fittings and related details, but still convey the yacht’s lines and overall character. For someone wishing a museum-quality piece, the sky is pretty much the limit. Want replicas of stainless steel railings and caprails? You got it; Klassen makes nickel-plated or silver fittings, brass railings, even deck planks. (Klassen employs high-density polyurethane composite and other plastic or fiberglass materials instead of real wood, as he warns that wood expands and contracts with moisture. However, he has on occasion made masts and booms of maple.) Radars, nav lights, even interior spaces can be and are crafted upon request, for what he calls the “fun factor.” Along these same lines, just as no real yacht would be complete without a fleet of watertoys, Klassen can hand-craft tenders and helicopters.

The scale to which each megayacht model is made varies. However, most models used for boat-show displays are two inches for each 60 centimeters of length, even three inches for each 1 meter of length. Klassen and his team refer to the real naval architecture drawings to cut the components. In case an item hasn’t been designed or chosen yet—say, specific deck hardware or furniture—they collect photos and present the builder or owner with a package to evaluate, then design the item selected. The final touches for each model: automotive paints that match the specifications for the yacht paint.

To see more models, or to commission one of your own, visit the Brian Klassen Models website.