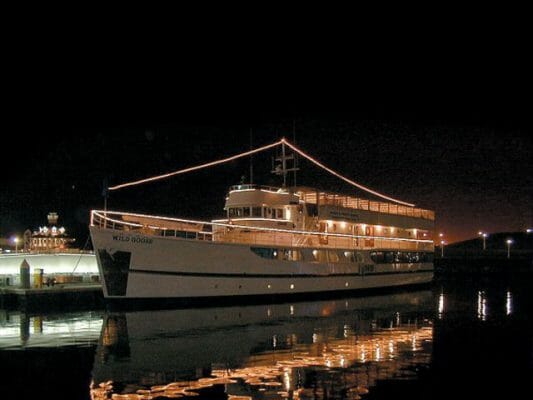 The 136-foot Wild Goose, the dearly cherished yacht of John Wayne, is now on the National Register of Historic Places.

In late July, the U.S. Department of the Interior approved the nomination, which had previously been certified by the California Office of Historic Preservation. Wild Goose was deemed eligible for entry into the National Register because of her association with Wayne. The documents submitted and approved cite him as “one of the most iconic actors in the history of cinema” and the yacht “as an expression of John Wayne’s personality and outsized image.”

Wayne enjoyed time aboard the all-wood megayacht from 1962 until two months prior to his death in 1979. Wild Goose was actually a converted minesweeper, originally built in 1943 in Seattle as YMS-328 for the U.S. Navy. She was decommissioned from military use in 1946, her three on-deck guns removed in the process. Harold Jones, the owner of the Vancouver Tug and Barge Company, purchased the vessel in 1948 and converted her for private use, christening her La Beverie. In the late 1950s, Max Wyman, a Seattle-area lumber tycoon, acquired her, gracing her with the name Wild Goose II, which was reportedly inspired by a run-down sailboat owned by his chef.

Wyman sold the yacht to Wayne for $116,000, a tidy sum in those days. Thereafter, she was known just as Wild Goose. Wayne further altered the yacht for his needs, creating a master stateroom and adding two staterooms for his children in 1965. In fact, one of the staterooms, fitted with bunk berths, still bears raised carvings reading “EW” and “AW,” made by his children Ethan and Aissa, respectively, to represent their initials. One of Wayne’s most famous additions is still aboard, too. It’s a round Koa wood table on the aft deck (above), where he hosted many a poker game. When just he and his family were aboard, it was used as a dining table.

Wayne’s children, captains, and crewmembers all have given interviews over the years attesting to how Wayne thoroughly enjoyed family time on Wild Goose. The kids waterskied off the California coast, and they took family trips up the U.S. West Coast. Wild Goose even ventured to Europe with Wayne aboard shortly after he purchased her, so that he could film Circus World. But she became particularly important to him after his lung-cancer diagnosis in 1964. Wayne moved to the coast, directly across the street from Wild Goose’s berth, in 1965.

Interesting enough, as big of a movie star as Wayne was, Wild Goose actually became a film star herself. Though she never appeared on the screen alongside Wayne, she was featured in The President’s Analyst in 1967 and Skidoo in 1968.