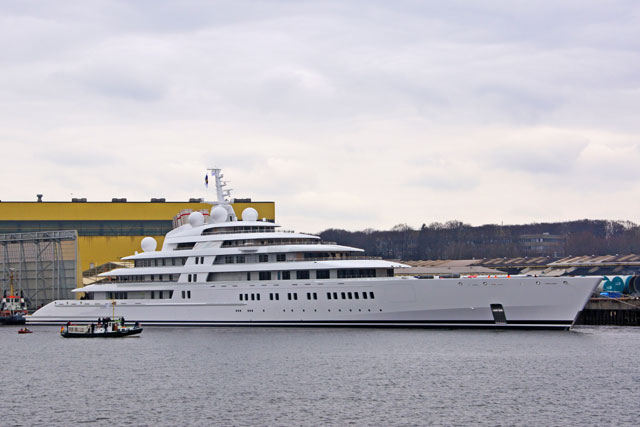 For the past few days, the Internet has been abuzz in anticipation of the re-emergence of Project Azzam at Lürssen. It finally happened today.

Well, technically, Project Azzam was visible as early as Wednesday of this week. She was easily seen in the floating dock where she’s been for nearly the past year. That’s what got the buzz going. There’s been so much buzz, in fact, that yesterday on its Facebook page, Lürssen itself posted a photo of Project Azzam still in the dock, accompanied by the cheeky caption, “??? Something is happening tomorrow ??? Check it out!”

Considering Project Azzam’s 590’6” (180-meter) LOA and towering height—her navigation mast rose far above the floating dock’s roof—it’s no wonder people are talking about her. If you’ll pardon the pun, she eclipses the world’s largest yacht, Eclipse, by about 57 feet. And, people have been talking about Project Azzam ever since the megayacht was first seen publicly in May 2012. That’s when she floated out of her first build shed and into a second one, minus her bow section. The reason: Project Azzam’s initial build shed was 558 feet (170 meters) long, limiting the amount of work that Lürssen could do there.

Confidentiality agreements limit the amount of information that can be released. Her LOA was approved for public consumption, as was the fact that Nauta Yachts was chosen by the owner, in a contest, to style her profile. Note that she has six decks and mostly covered spaces. That seems to mean that Project Azzam will not really be used for sun-worshipping. 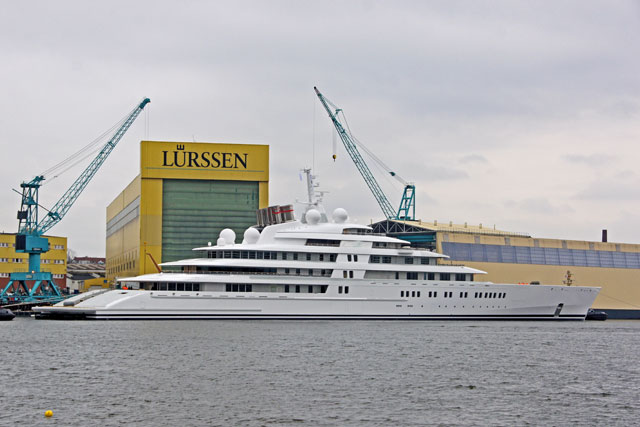 What she will be used for remains to be seen. Ever since Project Azzam emerged last year, there’s been wild speculation in yachting circles over everything from her features to her cost. Photos showing four huge tunnels at her transom led to the conclusion that the megayacht would have either gas turbines or waterjets, though waterjets seem more likely. (Does a nearly 591-footer really need gas turbines? Even if you have money to burn, literally or figuratively, you probably won’t do it.)

Interesting enough, the speculation hasn’t only gone on in the yachting world. CNBC quoted anonymous sources saying Project Azzam will indeed have waterjets and be capable of speeds around 27 to 28 knots. The famed Page Six of The New York Post, which focuses mostly on celebrity and business gossip, even got in on the act. Page Six—which is typically pretty accurate thanks to its well-placed anonymous sources—reported that her fuel capacity will be about 264,172 gallons. If that number seems strange, it is the equivalent of about 1 million liters. Page Six also claimed Project Azzam’s cost is $627.4 million, while other media reported a more broad “in excess of $500 million.” (Our view: Who cares about cost? It’s far more impressive to know the megayacht will be a spirited performer out on the water. In fact, we’d love to see the engine room when it’s complete.)

The next biggest guessing game is going on over the identity of the owner. Given the proclivity of Middle Eastern owners for super-size (super-duper-size, even) superyachts, many people believe the owner is a member of one of the various royal families there. It’s a good guess for an additional reason: “Azzam” means “determination” in Arabic. Some people suspect the owner is specifically from Abu Dhabi, because Azzam is the name of the racing yacht representing that emirate in competitions like the Volvo Ocean Race. Others, however, believe the buyer is Prince Alwaleed of Saudi Arabia, who already owns a megayacht, Kingdom 5KR. (While he’s had a successor to that megayacht in the design stage for quite some time, our sources say the design has yet to make the leap into construction.)

Of course, it’s all still speculation, as “Azzam” may not even be the true name of this mammoth megayacht. Not until the nameboard is seen and/or the name changes on official documents will we know for sure, because a lot of people are being paid to keep their mouths shut—and they’re doing a good job. 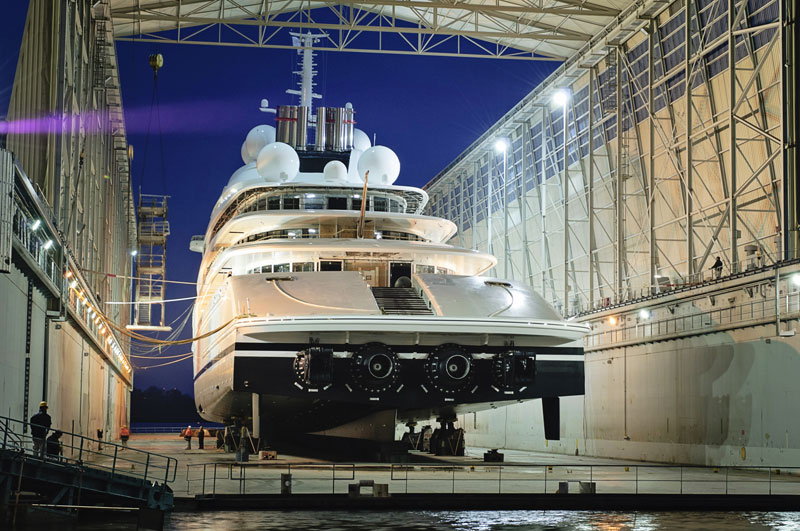 UPDATE: Lürssen released some details for the first time. It confirms the name and LOA, adding that the beam is 68’4” (20.8 meters). The draft is unexpectedly shallow for such a massive megayacht, just 14’1” (4.3 meters). Our guess on the propulsion package was wrong: Lürssen says two gas turbines will indeed be aboard, along with two traditional diesel engines, totaling an astounding 94,000 hp. This will allow Azzam’s speed to exceed 30 knots.

The owner selected Mubarak Saad al Ahbabi to oversee Azzam, from initial concept to completion. (Coincidental or not, the director of the department of the president’s affairs for the United Arab Emirates has the same name.) The directive was, obviously, a large megayacht, one with an enduring design to avoid looking dated, yet also reflecting originality and contemporary touches. The owner further wished to cruise at high speeds in warm, shallow waters.

Lürssen’s in-house team has provided naval architecture and engineering, complementing Nauta Yachts’ styling. Inside, Christophe Leoni, a French designer, is creating a decor in keeping with what Lürssen terms a “turn-of-the-century Empire style.” The Empire style dates back to the early 1800s, with somewhat rococo elements (think Napoleon’s Versailles). Imagine the effect of this in the 95-foot-long (29-meter-long) saloon, which has a decided lack of pillars.

Perhaps most impressive of all, Azzam’s delivery is set for later this year, making her build time just three years.