You are here: Home / People / Designers / Jon Bannenberg: A Life of Design—Book on Yachting’s Great Rule-Breaker

As children, we’re often told to abide by the rules. But sometimes, creating your own rules is better. The late Jon Bannenberg, who died in 2002, did exactly that with yacht design. The new book Jon Bannenberg: A Life of Design takes you through his extraordinary four-decade-long career. Written by Dickie Bannenberg (below), who worked alongside his father for 20 years, Jon Bannenberg: A Life of Design paints the picture of a man who successfully broke with convention, and who mentored many of today’s top designers. To wit: Terence Disdale, Tim Heywood, Sam Sorgiovanni, Donald Starkey, and Andrew Winch.

Jon Bannenberg, born in Australia in 1929, didn’t set out to become a yacht designer. In fact, he studied piano. He realized his talent for design upon moving to London in the 1950s. He designed private homes, and later cars, planes, and more. Yachts came into the picture for Jon in the early 1960s—at a time when the very concept of a yacht designer didn’t even exist. (Back then, shipyards tackled all aspects in house.) When a client whose house he was working on showed him the plans for a yacht and asked his opinion, Jon replied, “I told him it was terrible.” The client defensively challenged him to do it better. The rest is history: The yacht was the star of the 1963 London Boat Show.

Jon Bannenberg: A Life of Design takes you from those early days through to the establishment of his studio. You’ll learn how Jon received a huge break in the form of the QE2, christened in 1967. He designed several areas, like the famed Double Room, the largest on the ship—and of any pleasure vessel in those days—with a sweeping staircase connecting its two levels. The Card Room, a number of First Class suites, and a pool all received the Banneberg touch, too. 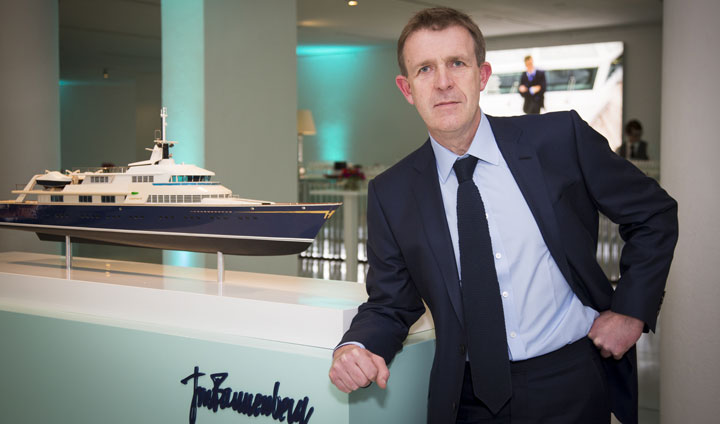 In terms of yachting, Jon Bannenberg: A Life of Design reveals one of this man’s most important assertions. He believed a yacht should not be treated as three separate designs, meaning naval architecture (hull), exterior design (superstructure), and interior design. Rather, he avowed that all could spring from the same drawing board. It forever changed how owners and the industry operate. The Bannenberg studio went on to produce more than 200 more yachts. Their names are as famous as their original owners: Carinthia VI (Helmut Horten and later his widow Heidi); Nabila (Adnan Khashoggi), the three My Gail projects (Gerald Ronson); Talitha (J.P. Getty Jr.); and of course The Highlander (Malcolm Forbes). No wonder Jon was appointed a Royal Designer for Industry in 1978, only the second yacht designer to receive the honor. Sadly, he didn’t live to see some of his other famous creations come to life, notably Rising Sun.

Dickie Bannneberg has spent the past five years working on Jon Bannenberg: A Life of Design. He pulled together his father’s drawings, photos, and letters. There are 800 illustrations alone, each carefully detailed and captioned. Dickie also interviewed many of Jon’s business associates and clients, including his first yacht client. The 544 pages of Jon Bannenberg: A Life of Design celebrates a man who deserves ongoing recognition for challenging preconceived ideas.

Dickie writes, “My father liked how the pianist Arthur Rubinstein once suggested music competitions should be scored with either 100 or zero. ‘You are either a musician or you aren’t.’ He would say the same about design.”

You can order Jon Bannenberg: A Life of Design for £100 (excluding postage) directly via the Bannenberg & Rowell website.