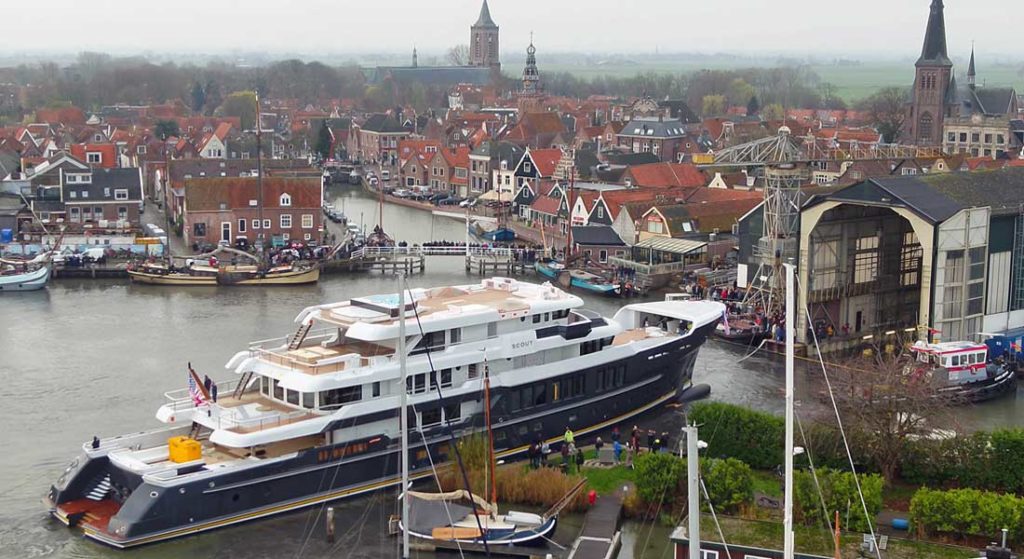 Springtime next year likely can’t come soon enough for the owners of Scout. Their long-awaited, super-size superyacht slipped out of Hakvoort’s build shed this weekend. At 209 feet (63.72 meters), Scout is the Dutch yard’s biggest build to date.

Due to her height, Scout can’t be completed within that shed. Therefore, she moved to Amsterdam for final fit-out of her mast and related equipment, even a crow’s nest. Since she’s an explorer yacht, that mast should be put to good use on voyages. Further coming aboard in Amsterdam: stabilizers and propellers. (If you look carefully at the launch photo, you’ll see her shafts are in place but prop-less.)

Also known as Hakvoort YN249 as well as Project Brio, among other names, during construction, Scout is from the design boards of Diana Yacht Design for naval architecture and H2 Yacht Design for styling. (The project began construction under a different owner.) H2 Yacht Design chief Johnny Horsfield explains that the owners wanted “a rugged explorer-style yacht intended to look like a conversion from a commercial vessel.” That explains the raked pilothouse windows, for example, among other things. It further explains why the tenders sit on the foredeck, rather than hidden from view. Horsfield says it enhances “the utilitarian aesthetic.”

Full details about Scout should come after delivery. For now, Hakvoort reveals she has four guest staterooms on the main deck. The master suite, meanwhile, occupies the full deck above. Nine crew cabins as well as two staff cabins sit below decks, with the captain’s cabin aft of the wheelhouse. The healthy beam of 38 feet (11.6 meters) should translate to comfortable relaxation areas, including an observation lounge. Given her anticipated 4,800-nautical-mile range at 12 knots under Caterpillar power, Scout should let the owners and guests enjoy a variety of global locales.