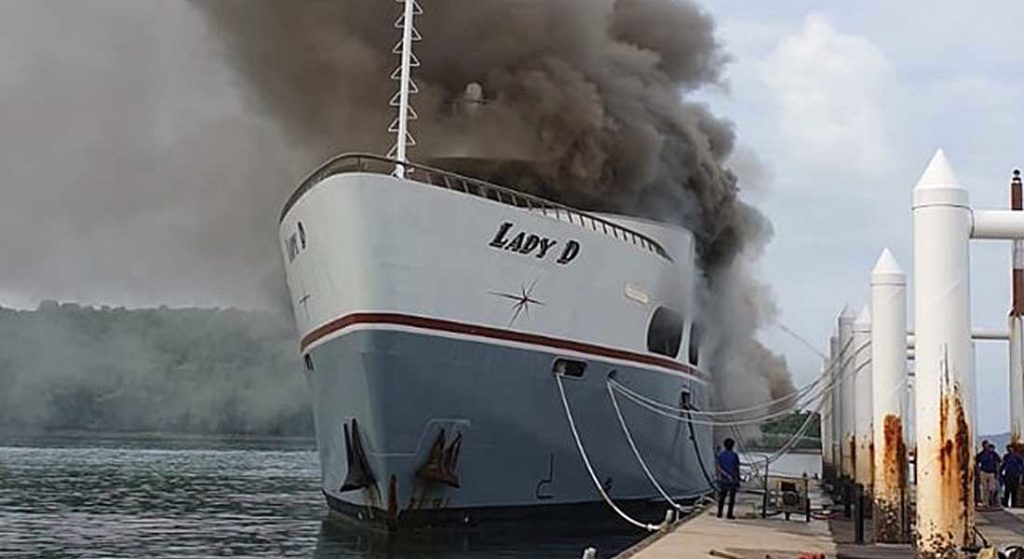 UPDATE, AUGUST 9, 2019: New photos of Lady D reveal significant external damage. Investigators continue to review the cause of the fire. Therefore, reports of a total loss are not necessarily true.

A fire broke out aboard the megayacht Lady D in the early morning hours today in Thailand. The 185-footer (56.39-meter), a four-decade-old vessel that formerly was a commercial ship, is still floating. However, the assessment of the damage, and an investigation into its cause, is ongoing.

Lady D was at the Ao Po Grand Marina in northern Phuket. Gordon Fernandes, the head of Asia Pacific Superyachts in Phuket and Myanmar, which was assisting the yacht, issued a written statement about the incident. “Marina staff were notified of the fire at 8:25 a.m. this morning and called the local fire department and also called the marine police for assistance,” he says.

While Fernandes adds that firefighters arrived on scene, and the fire eventually was put out, multiple newspaper reports provide further insight. According to the Bangkok Post and others, crewmembers first attempted to extinguish the flames. They were unsuccessful. Firefighters ordered the crew to untie Lady D from the dock, concerned about the fire spreading. In addition, the reports state, the firemen were unable to reach the dock with their trucks. Lady D was docked at the far end of a marina pier.

Both Fernandes and the newspapers say no injuries or deaths resulted.

There’s no official confirmation yet on how the fire began, nor where it started. The newspapers relate eyewitness accounts of flames beginning aft, however, and spreading upwards.

The Bangkok Post adds that officials planned to tow the yacht to a nearby uninhabited island for additional safety reasons.

Lady D is a former offshore supply vessel. She initially launched in 1976, under the name Salem, at Quality Shipbuilders in Mississippi. She delivered crew to and from oil fields. In 1989, a yacht owner had her converted for luxury use. Bearing the name Quest, the megayacht later changed names to Lady J. She became Lady D in 2008.