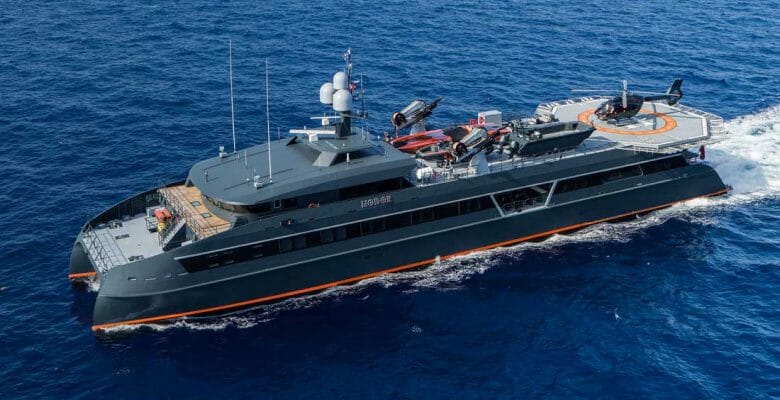 At just over 216 feet (66 meters), Hodor has plenty of space to carry tenders (five of them), along with a personal submarine, a helicopter, plus multiple quads and PWCs. Then add in several crew cabins and a handful of luxury spaces for guests. Hodor is not just a shadow boat for a superyacht. She is the first launch in the Shadow Cat series from Incat Crowther. The catamaran configuration is an alternate consideration for an accompanying craft.

Hodor saw construction at Astilleros Armón in Spain. However, the Shadow Cat range is not limited to this shipyard. Nor are features limited. Incat Crowther, which handles design and engineering, will tailor a size and capabilities to your liking. The catamaran hull configuration, though, is fixed. The naval-architecture studio believes in the stability and efficiency, as well as the space benefits. In fact, the Shadow Cat is based on proven offshore vessels (with design by Incat Crowther, of course). 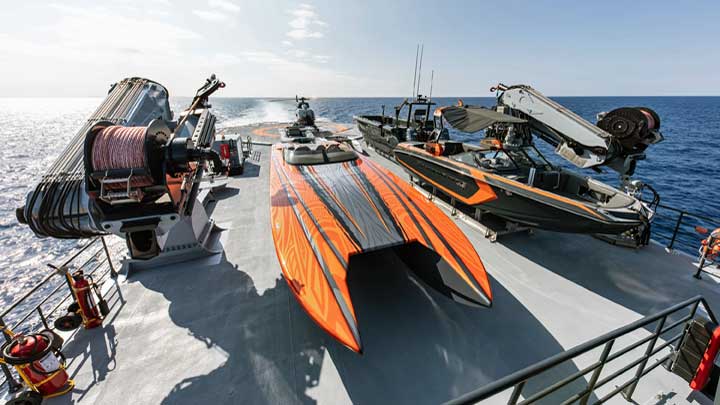 For Hodor, the owner wanted to ensure he and his guests could arrive at and depart from his primary yacht safer at sea. This explains why Hodor has a certified helipad. It also explains why she has a few flexible places for his virtual armada of watertoys. For instance, some sit on the upper deck (above), where two knuckle-boom cranes launch and retrieve them. Other toys sit aft on the main deck, also with their own davits. While the submarine sits in a garage, an ROV and portable davit sit on the foredeck. If the owner acquires more PWCs in the future, they, too, can sit on the foredeck.

The recreational assets don’t end here. Hodor supports diving, and even has a hospital area with a decompression chamber. The above-mentioned quads encourage on-land exploration. Arguably, though, the guests will have just as much fun aboard the largest tender. LOA: 56 feet (17 meters). It sits on its own lifting platform. 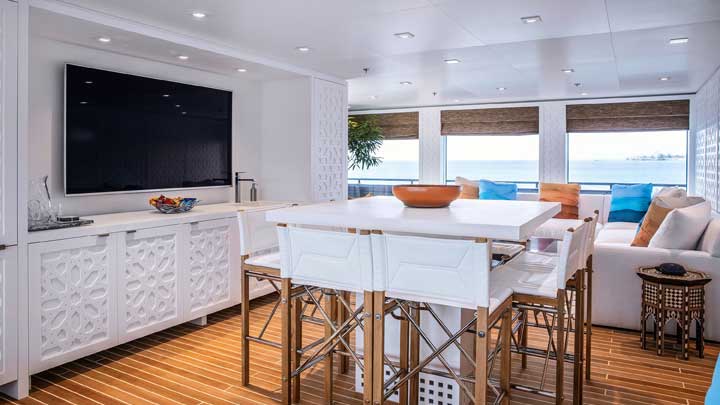 With dedicated areas for fresh and frozen food stowage, spare parts, and other goods, Hodor still sets aside interior areas for pure relaxation. Notably, the Shadow Cat has a reception room (above), a lounge-like area just forward of the helipad. The idea is to make guests more comfortable between arriving via helicopter and departing via the tenders. This reception room has a stairway leading down to a boarding lounge to port at the waterline. It has a shell door, just like a crew-only access area on the opposite side.

Each Shadow Cat bears engineering for strong performance underway. Hodor reportedly sees a top speed of 22½ knots. Being self-sufficient, she additionally bears a reported 5,500-nautical-mile range at 14 knots. Incat Crowther points out that, since catamarans are more stable than monohulls, she employs Humphree active interceptors when underway; no need for at-rest stabilizers.

Carrying accommodations for 20 crew, Hodor is currently in the Med.