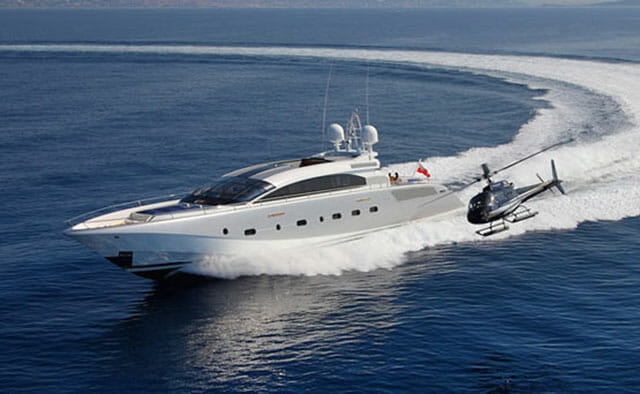 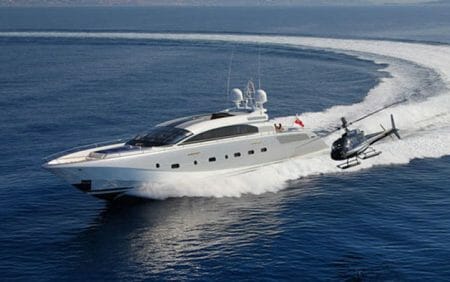 The Fort Lauderdale International Boat Show (a.k.a. FLIBS, for short) has long been known as the world’s largest in-water boat show, and the premiere megayacht show stateside. In fact, now in its 52nd year, the show, being held October 27 to 31, will mark the debut of a number of new megayachts. Here, we highlight six of the most significant ones. To learn more after reading about them, visit the builders’ websites, or download the handy (and free) MyBoatShow smartphone app, which includes an interactive FLIBS map, lets you search for these yachts’ locations at the show, and even lets you build a list of your own must-see megayachts, and more.

1. Newcastle Shipyards’ Harbour Island. Reportedly the largest-volume 180-footer (55-meter) available for sale, displacing 910 tons, Harbour Island was recently completed for an experienced American yacht owner. Highlights include two master suites, with one on the upper deck and the other on the main deck. There’s also an infinity pool aft on the sundeck, which should be an inviting spot day or night. Inside, dark, rich woods and abundant stonework set a sophisticated tone. Styling and naval architecture is by Murray & Associates, while interior design is by Claudette Bonville Associates.

2. Westport Shipyards’ 112. Westport has been producing the 112 for several years, but the model on display at FLIBS is the first with an on-deck master suite, a new layout for the series. Entry to the suite is via a port-side, stone-soled foyer, which runs past the stairs down to the four guest staterooms. It’s a nice change from the original layout, which featured a good-size dinette where the master now is. Given a choice of the two, it’s probably safe to say more buyers will opt for the new layout.

3. Benetti Crystal 140. The Crystal 140 series is one of the largest Benetti Class semi-custom yachts, and this is hull number one. Large windows along each side should brighten the Caribbean-inspired decor, created by the owners with designer François Zuretti. As is becoming more popular, the dining area is aft on the bridge deck, freeing up the main deck for more relaxation and more space for the owner’s suite, complete with an office.

4. Danish Yachts’ Shooting Star. The first of the yard’s Aerocruiser 38 II series, Shooting Star (pictured above) bears styling by Espen Oeino and is said to be as fast as she looks. Top speed is reportedly in excess of 50 knots, given carbon-fiber construction and power from twin 4,750-hp MTU diesels paired to jet drives. LOA is 125 feet (38 meters, hence the “38” in her model name). Inside, there’s a decided emphasis on light tones and natural lighting, thanks to the handiwork of Art-Line Interiors.

5. Marlow Explorer 97E. Despite the name, the Marlow Explorer 97E measures 101 feet LOA. The 21-foot beam and impressive performance (reported 29-knot top end and 23- to 24-knot cruise speed) should attract attention, as should Marlow Yachts’ renowned attention to detail. What other production builder offers guests a full cooking area, not just a refrigerator, below decks, for more than a late-night glass of milk and cookies? The main-deck master even has a door to the side deck. These prove that while Marlows look pretty traditional on the outside, they’re anything but on the inside.

6. Lazzara Yachts LSX92. Lazzara Yachts has tweaked the design of the LSX92, introduced in 2010. The new model has a hardtop, plus flying-bridge space increased by 50 percent. There are also more interior layout and decor options. Remaining unchanged, of course, are the fold-down balcony off the master stateroom and the IPS propulsion system, offering lower fuel consumption and better maneuverability than traditional powerplants.