You are here: Home / Yachts / Motoryachts / Soprano Splashes at Hakvoort 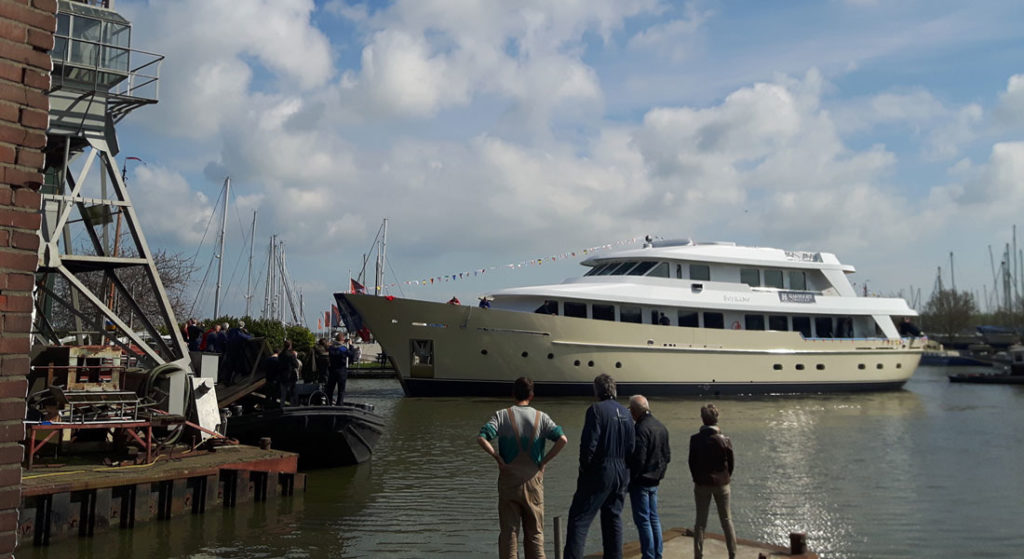 There’s an old saying that it ain’t over ‘til the fat lady sings. Well, the soprano of that saying is only just beginning to sing. At least in the case of Soprano, just launched late last week at Hakvoort.

Measuring 125’5” (38.25 meters), Soprano is much smaller than other recent launches at the Dutch yard. But she is no less significant. For instance, her styling draws largely from Pamela V, another Hakvoort from recent years. It also draws largely from Heliad II, from Lynx Yachts. It’s because all three are from Diana Yacht Design. Even though her arch wasn’t in place at the launch, you can see Soprano’s canoe stern. The paint, eloquently named Moondust, draws more attention to it.

Inside her four decks, Soprano has accommodations for eight in the owners’ party and six crewmembers. What you might not expect, due to her LOA, is the master suite sitting forward on the main deck. It occupies the 26-foot (8-meter) beam, though, which you surely would expect. So, too, does the VIP below decks, accompanied by two double cabins. Felix Buytendijk Yacht Design is responsible for the interior design (though no details are available on decor).

Upon delivery in several weeks, Soprano will be no coastal cruiser. Instead, she’s mean for long range. Diana Yacht Design says her twin Caterpillar engines will permit an 11-knot cruise and impressive best range of 5,000 nautical miles. Wherever she ventures, she offers her guests a few options for enjoying the water. For example, she’ll carry a Laser sailboat on her foredeck. She also has a fold-down platform  amidships and a fold-down swim platform (tucking away to preserve the canoe stern). After a full day of fun, everyone can head up to the sundeck for cocktails, or a refreshing soak in the hot tub.

Upon delivery, Soprano will welcome charter guests in the Med this summer. Those of you who are environmental minded will appreciate that she’s the first Hakvoort compliant with Lloyds’ Green Passport. (The notation is also called the Inventory of Hazardous Materials.) Briefly, it requires identifying, tabulating, and controlling hazardous materials onboard. The materials include items used for construction, as well as operation.