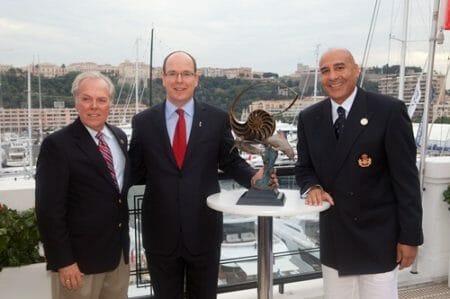 As I’ve explained in a handful of previous posts, the International SeaKeepers Society is focused on protecting the marine environment. Besides raising awareness and providing much-needed data to scientists, each year it recognizes a person whose commitment to protecting the oceans is just as profound and passionate. In fact, past recipients of the SeaKeeper Award include environmentalist and film producer Jean-Michel Cousteau, sailor and environmentalist Sir Peter Blake, broadcaster Walter Cronkite, and director James Cameron.

This year, the SeaKeeper Award was presented to His Serene Highness Prince Albert II, the sovereign prince of Monaco. (He’s pictured at center, along with International SeaKeepers Society chairman Michael Moore at left, and Lotfi Maktouf, a SeaKeepers board member and the owner of the Port Palace Hotel in Monaco, where the award was granted.) Megayacht News was privileged to be among the select few on hand at the award ceremony, hosted by SeaKeepers and Yachts International. It took place the day after the two hosted the annual Bal de la Mer charity gala, where the prince’s dedication to the oceans was also celebrated.

Prince Albert II does more than just lend vocal support to preserving the environment. He founded the Prince Albert II Foundation in 2006 with three main areas of focus: climate change, biodiversity, and access to drinking water. “Monaco may not be the biggest country in the world, but I am determined to show it can be among the most innovative in its approaches to the environment,” he said at the time. Two years later, his Foundation teamed with the World Wildlife Fund to prevent Mediterranean bluefin tuna from becoming extinct, aiming to educate consumers and scientists alike on responsible practices. Monaco became the first European Union member to ban consumption of bluefin tuna. Besides these, Prince Albert II is president of the Mediterranean Science Commission, which promotes better scientific understanding and monitoring of the Mediterranean Sea. He has held the position since 2001. Furthermore, he was the 2007 International Patron of the United Nations’ Year of the Dolphin, and in 2009 he received the Roger Revelle Prize from Scripps Institution of Oceanography for his emphasis on environmental causes and support of scientific research.

Honoring Prince Albert II was fitting in other ways, too. His father, Prince Rainier III, was the second SeaKeepers Award recipient, for example. And his great-great grandfather, Prince Albert I, earned the nickname the Navigator Prince and is considered a father of oceanography. In fact, during the award ceremony, Moore reflected on these accomplishments, as did Prince Albert II. “He was an incredible man with an incredible vision,” Prince Albert II said. (Among other things, Prince Albert I called attention to overfishing, suggested airplanes be used to spot schools of fish, and created underwater preserves. And he did all of this from the late 1800s to early 1900s. He also founded the Musée Océanographique de Monaco in 1910.)

“I’m really touched and honored by this award,” Prince Albert II added during the ceremony, “but I don’t think it’s solely about me or my family.” He explained that what he’s trying to accomplish with his foundation is what his great-great grandfather did: help science and cultures work together. He’s further hoping to create more of a dialogue, so that all learn “what a vital role the seas and oceans play.” With SeaKeepers’ help, he added, “let’s try to keep caring about our seas and oceans.”