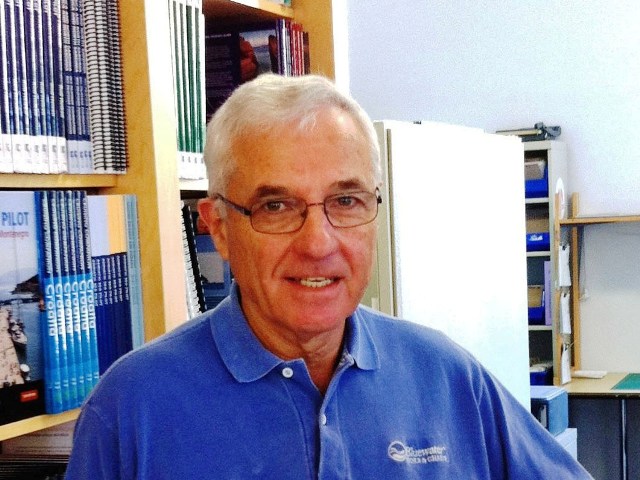 If you’ve ever stopped in at Bluewater Books and Charts’ shop in Fort Lauderdale, then you may already know John Mann, the owner. While Mann has been providing navigation products and services to boaters, yacht owners, and yacht crew for more than a decade, he also holds another important position. He’s the incoming chairman of the U.S. Superyacht Association (USSA), which advocates on behalf of the American megayacht industry as well as owners and crewmembers. (Full disclosure: Megayacht News is a founding member of USSA.) USSA also pushes for better understanding of regulations and enforcement among government officials and foreign-flagged megayachts and crew entering U.S. waters.

In this Megayacht News Leadership Series interview, Mann discusses what USSA has successfully achieved in just five years of existence, and what it’s focused on for the near future.
Q: Many people in the industry have interesting stories about how they became involved in yachting. What was your initial introduction, and how did you decide to make it a career?

A: Twelve years ago my wife and I purchased Bluewater Books and Charts after long careers in corporate America. We were both ready for a career change, and the combination of my having been a boater all of my life and my wife’s background and family business in the UK being in marine publishing, we decided that the  marine industry was a good fit.

Q: What convinced you to become a founding member of the U.S. Superyacht Association?

A: With the U.S. being among the top three nations in the world for building large yachts, and with over half of the owners of large yachts being Americans, it seemed pretty obvious that we should have a trade association in this segment of the marine industry. As the self-proclaimed yachting capital of the world, I felt business owners in Fort Lauderdale should take the initiative to form a trade association to give a voice in regulatory and legislative matters to the large-yachts segment of the recreational-boating market.

Q: You’ve held a few positions with USSA, including with the Advocacy Committee. What are some of the things that particular committee has done, and is continuing to do?

A: As Advocacy chairman in the association’s first three years, our committee really focused on entry issues that large yachts were facing coming into the United States. We worked very closely to establish close working relationships with the Coast Guard, Customs and Border Protection, as well as the State Department. All of those regulatory and enforcement departments are important for large yacht and crew, particularly foreign flagged, when entering U.S. waters. While we have made great strides in educating these government departments on the economic importance of large yachts coming to the U.S., the work in ongoing.

Q: A few years ago the USSA, along with the International Superyacht Society and the Marine Industries Association of South Florida, invited representatives from the U.S. Coast Guard and Customs & Border Protection to a captain’s briefing. The goal was to clear confusion over things like what visas are needed for crew entering the United States, plus start a direct line of dialog between key crew personnel and government officials. Have things improved, or are there still problems, and if so, how is USSA able to intercede?

A: We have held various captains briefings with regulatory officials in Fort Lauderdale; Newport, Rhode Island; and in St. Maarten to inform and educate both the U.S. officials and crew to make it easier to enter, cruise, and charter in U.S. waters. As I said earlier, while progress has been made, the constant change in personnel, both regulators and crew, as well as changes in regulations make it necessary to continue these briefings. This year at the Fort Lauderdale International Boat Show, we’ll have experts in maritime law, insurance, and yacht importation at our captains briefing to give their insights on foreign-flagged yachts in U.S. waters.

Q: The USSA continues to advocate on behalf of the industry. What are some of the primary objectives you and the board are working on for the coming year?

A: Next year is going to be an exciting year for the U.S. Superyacht Association. We will truly become a national association, with the addition of seven new board members representing specific regions of the country. Regional committees for advocacy  working with the national committee will allow us to have a stronger voice in Washington with regulators and legislators. The regional marketing committees will help the national marketing group promote the U.S. as a destination for these large yachts. USSA is an operational partner with America’s Cup 34 and will be encouraging large yachts to attend and be part of the race course for the Cups Challenger series in San Diego and Newport.