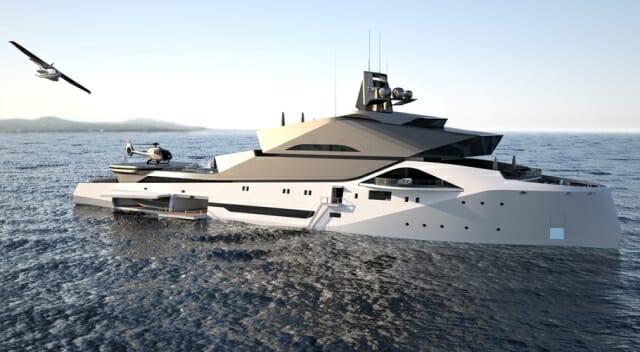 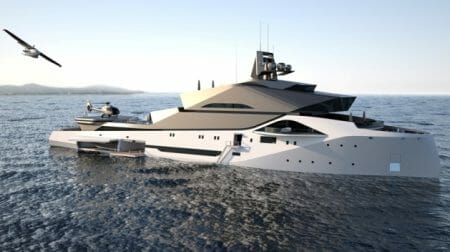 The Dune 90 Explorer is the brainchild of Arman Fisette, who created Arman Marine after years spent at BMW DesignWorksUSA, contributing to the design of various craft, including Sea Ray boats. Prior to that, Fisette was a designer for Bluebay Yachts. In observing yacht styling in recent years, particularly among large megayachts, Fisette believes that there’s a creativity gap—too many “wedding cake” designs. Thus, his goal with the Dune 90 Explorer was to create something that stood apart, yet still provided the amenities owners want.

At 295 feet LOA (90 meters, hence the model name), the Dune 90 Explorer draws styling cues from two seemingly unlikely inspirations: frigates and even sandy dunes. But, given that frigates have incredibly efficient hull forms, and given the graceful, natural beauty of dunes, you begin to realize there’s method to the seeming madness.

Amenities-wise, the Dune 90 Explorer provides accommodations for 22 in the owner’s party, plus 28 crewmembers. The owner gets a private saloon, which overlooks the foredeck pool. A 49-foot (15-meter) beam should ensure comfort here and elsewhere. A heli hangar, plus dedicated stowage for a personal submarine, an amphibious aircraft, three tenders, four offroading vehicles, and more helps emphasize the “Explorer” aspect of the Dune 90 Explorer’s intended usage. So, too, does the naval-architecture input from Samuel Lieutaud. The yacht, with a 14-foot (4.2-meter) draft, is expected to top out at 17 knots and cruise at 14 knots, under Caterpillar 3516B power. Range at 14 knots should be an impressive 11,000 nautical miles. 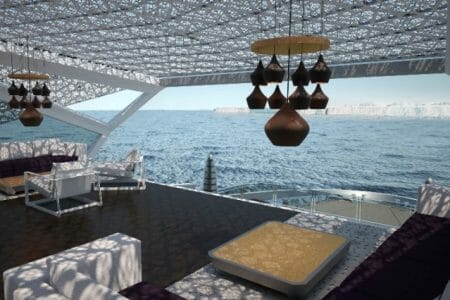 More interesting, however, is how Fisette says the Dune 90 Explorer maximizes natural light, in ways far different than other megayachts. Here’s his explanation:

Obtaining the right balance between openness and privacy on a superyacht is often a delicate part of the design process, and the outcome seems to be successful in relatively few cases. The outdoor areas are often too exposed to dockside onlookers or passing yachts, while the interior is generally disconnected from the outside environment. Considering that owning a superyacht is as much about the onboard experience as the privilege of being surrounded by the most beautiful beachfronts in the world, one can understand that enhancing the outside views and light ingress should be one of the major focal points for a yacht designer.

The goal for this concept was to conceive an innovative and aesthetically pleasing verandah concept that would take into account the effects of radiant heating by the sun. The idea revolved around the application of a modular and multifunctional glass facade system, featuring both reduced weight and complexity as well as surprising aesthetics and light ingress. In terms of structure, inspiration was found in geodesic domes and airport terminals. However, for this rationale to be applicable on a superyacht, to keep cost and build complexity in check, the overall geometry would need to be simplified, ideally made up of large, flat surfaces.

For this particular aspect of the design, the clean and taut surfaces of swerving dunes proved to be a promising reference, as they seemed the natural way of combining flat surfacing with a sense of dynamism and visual tension. The end result is a design style fittingly called “duning,” a combination of “faceting” (that places the emphasis on the surface) and “edging” (where the attention is drawn on the edges resulting from surface intersections). The edges draw the viewer’s eye and lead it across the design, while the flat surfaces between those edges are simple and clean enough to remain in the background and give center stage to the edges. Where they change direction, though, the curvature becomes a hotspot for light reflection. This emphasizes certain areas of the design and gives it a certain softness that contrasts beautifully with the predominant starkness of the design.

Also the overall composition of the yacht was challenged, and the decision was made to visually make a distinct break-up between hull and superstructure, while at the same time these two parts as a whole seem to have been cut out of a single volume. For the imaginative, the idea of a mollusk shell might come to mind, being carried by its possessor.

With this as a building ground, the next part of the design – the glass facade – could be started. Inspiration here was found in the intricately designed patterns present in Arabesque mosaics and window screens, which successfully combine light ingress with privacy and a high level of visual detailing.

The facade is made up of an array of triangular glass panels that fit on top of a triangular structure. The latter is aligned with the yacht’s structural frames and bulkheads to safeguard an optimal distribution of forces. This keeps the design and building process simple and out of the realm of the experimental.

The tinted glass panel is a three-panel composite, coated on both sides with an opaque titanium graphic and supported by a structural panel that holds a third graphic. The superposition of these three graphics leads to a moiré effect that produces different effects depending on the distance, viewing angle, and whether the surface is front- or backlit. The combination of both layered glass and the titanium coatings, on the other hand, is an effective means of keeping the heat out while precious light is allowed in.

Fisette says he and his designer partners are speaking with a few shipyards about bringing the design to fruition.