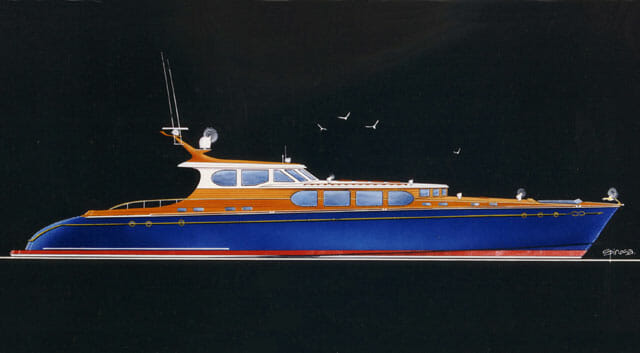 Editor’s note: With so many concept projects being touted these days, we got to thinking. How many designers have notebooks and “doodle books” packed with pages of designs that were solid ideas yet never came to fruition? Therein lies the idea behind the Megayacht News Designer’s Notebook series. Every other week, we’re spotlighting a designer and his or her superyacht project that has never been seen by anyone other than the designers themselves and the owners who commissioned them. For one reason or another, the design didn’t come to fruition: perhaps a sudden death of the client, perhaps a change in fortune. Regardless, the design can still be executed and turned into a yacht today. Therefore, the Megayacht News Designer’s Notebook gives designers the chance to have their “voice” heard: They explain, in their own words, what inspired the design and what some of the special details are. And, if you’d like to arrange an appointment with the designer to discuss the design in more detail, you’ll find a link at the end of each writeup.

J.C. Espinosa has made a name for himself designing production yachts and megayachts bearing fluid curves and flowing shapes. While classic commuter yachts do bear some curves, they’re far more linear than Espinosa’s signature style. That’s among the reasons why this 120-foot (36.6-meter) commuter-style megayacht is so interesting. As Espinosa explains here, the design was commissioned soon after he launched his studio—by a Japanese client, too, further making it unusual. It’s dramatically different than anything Espinosa had done back then, and remains so today. Yet, the styling and interior design remain timeless. 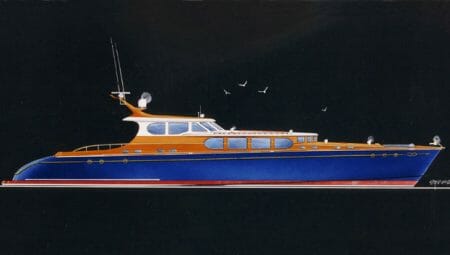 “Many years ago, almost at the beginning of my career in yacht design, I was asked by Mike Kelsey, CEO of the legendary yard Palmer Johnson of Sturgeon Bay, Wisconsin, to come up with a retro design for a 120-foot commuter-style yacht for a Japanese client of his.

“The brief was to style a yacht with the looks of the famed commuter yachts of the early 1900s. These boats were known for having massive engines in their quest for speed. Later in the century these speed boats evolution into what is now known as “Commuter Yachts.” These elegant vessels share the speed of the earlier speed boats but incorporated well-appointed interiors to pamper their owners. These vessels were mainly used for commuting between their owner’s residences along the water to the financial centers of Wall Street. A good example of this style vessel is Aphrodite, a sleek 74-footer owned by Wall Street financier John Hay Whitney and built by the Purdy Boat Company in 1937.

“The Japanese client wanted a yacht that will borrow the looks and speed of these commuter-style yachts but with all of the modern systems and appointments found on a modern luxury yacht. He also wanted a waterjet propulsion system, tied to large MTU engines. Palmer Johnson, known for their recent launch of the waterjet-powered motor yacht Time in 1984 and Fortuna for the king of Spain, had the knowledge and experience to tackle such a project. Tom Fexas was enlisted to provide the naval architecture for the project, and I was asked to come up with the style for the superstructure and the accommodations and interior design for this project. The interiors proposed were sumptuous and traditional, a reflection of a bygone era! 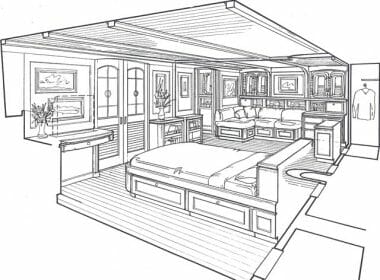 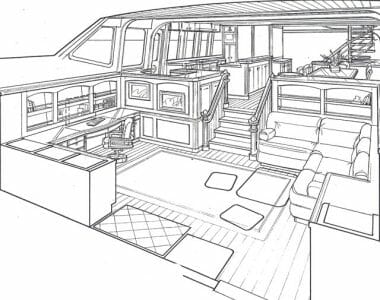 “The client was to use his new yacht for cruising the islands around his native Japan. Owner’s and guest accommodations were to be provided on the lower deck, and lounging areas were located on the main deck, with a large, open aft deck for lounging and dinning alfresco.

“Our challenge as designers was to bring styling cues from the past into a modern machine.  Soon after the proposal were submitted, the client passed away, and the project was stopped in the preliminary stages of design. It was very sad for the design team and builder not to have had the opportunity to build such a distinctive vessel, and we are still waiting for someone to bring it into existence.”

To arrange an appointment to discuss this project with the Espinosa team, please fill out this contact form.