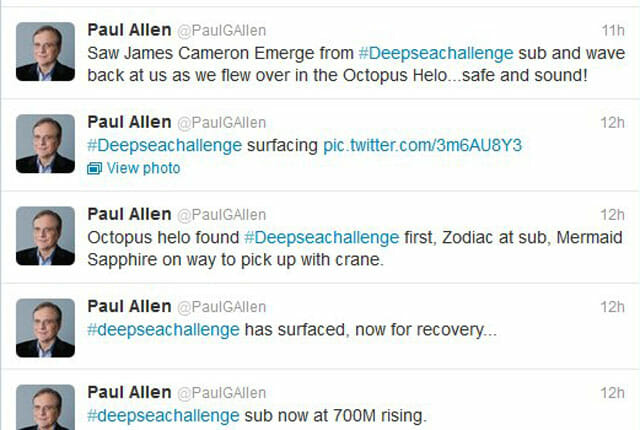 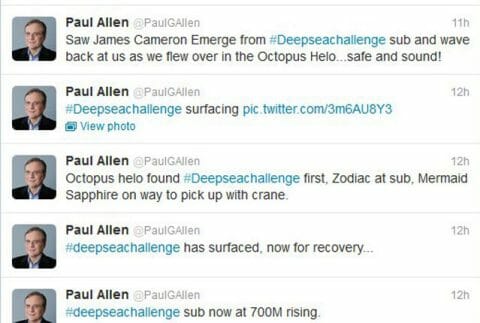 You may have read the news over the weekend about film director James Cameron successfully diving to the bottom of the Mariana Trench. What you may not have heard is that the superyacht Octopus was on site for the history-making dive. Not only that, but Octopus’ owner, Paul Allen, was onboard the yacht, posting updates on the social media site Twitter the entire time.

The screenshot here is just a sample of about 30 Tweets (Twitter posts) that Allen made on Sunday. In one, Allen uploaded a photo of the sub that he took from aboard Octopus and wrote, “Jim describes the sub as ‘Kawasaki racing green’ and a ‘cross between a hot rod and a torpedo.’” In another update a few hours later, he wrote, “Saw James Cameron emerge from DeepSea Challenge sub and wave back at us as we flew over in the Octopus helo…safe and sound.”

Allen actually started posting, albeit without mentioning Octopus, a few days earlier. “Arrived Guam. Hope to see James Cameron’s Deep Challenge make 2nd dive ever to bottom of the Pacific’s Mariana Trench. Not done since ’60,” he posted on the 23rd. (While he didn’t mention it, that dive in the 1960s also only lasted about 20 minutes. Cameron planned to spend several hours.) Whether deliberate or not, the lack of mentioning Octopus might explain why reporters in Guam didn’t know she was about to make history. They took note of Octopus’ arrival—hard not to, given her 414-foot length—but simply stated the yacht was taking on fuel and supplies and changing crewmembers.

The next day provided the first cues from Allen that he was en route to witnessing history, and even aiding Cameron in his attempt to reach the bottom of the seven-mile-deep trench. “Just wished James Cameron good luck on his dive to the bottom of Challenger Deep, he visited Octopus will update if weather ok for sub dive,” Allen Tweeted on March 24. The next day, during the dive, Allen posted that he would be listening to Cameron’s commentary via the sub’s underwater communications system. He also added that Octopus’ helicopter would be filming the ascent once the dive was over.

While several of Allen’s posts were educational, they also reflected excitement: “Pressure at bottom is 16,285 pounds per square inch at that depth. Design pressure was 16,500 …Yikes/Amazing!”