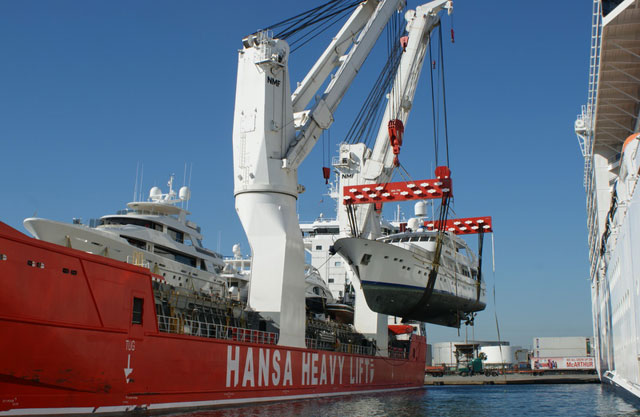 Yacht Path International, a prominent yacht and megayacht transport company based in Florida, and three related companies have filed for Chapter 11 bankruptcy protection.

The filing was made on March 20 as a voluntary petition, meaning Yacht Path itself submitted the request. (Companies can be forced into bankruptcy by their creditors, a situation that would be classified as an involuntary petition.) The attorney representing Yacht Path tells a few media outlets that the Chapter 11 filing was made in response to a creditor garnishing the company’s bank accounts, which prevented Yacht Path from paying its bills. Chapter 11 involves reorganization of a company so that it may remain active and pay its creditors over time.

According to court documents, Yacht Path has liabilities exceeding $7.5 million. It owes its secured creditors $259,447.66 and unsecured creditors $7,280,279.49, of which $5,124,845.50 amounts to priority claims. In Chapter 11 proceedings, unsecured priority claims include things such as deposits made by individuals for services not provided, salaries and commissions, and more. They are paid before other claims, except for administrative-related items like trustee fees. In Yacht Path’s case, court documents reveal the unsecured priority claims pertain to deposits as well as taxes and other debts owed to government bodies (such as custom duties). Deposits were made by the owners of more than 100 yachts and megayachts (some owners having more than one boat), ranging from a 38-foot catamaran to 130-, 151-, and 161-foot motoryachts, all of which were shipped from various destinations that its ships regularly serve.

Dennis Cummings, president of Yacht Path, tells The Triton that “Through whichever tools are available to us, our first goal is to make our clients whole.” Cummings, who operates Yacht Path with his brother Kevin, also told the yacht-crew newspaper that the reorganization process should take three to four months. “Do Kevin and I feel obligated to make these people whole? Absolutely,” the paper quotes him as saying. “Just allow me to run my business again. Free me from my handcuffs. What we have is worth saving, and the way to do that is to make good with these clients.”