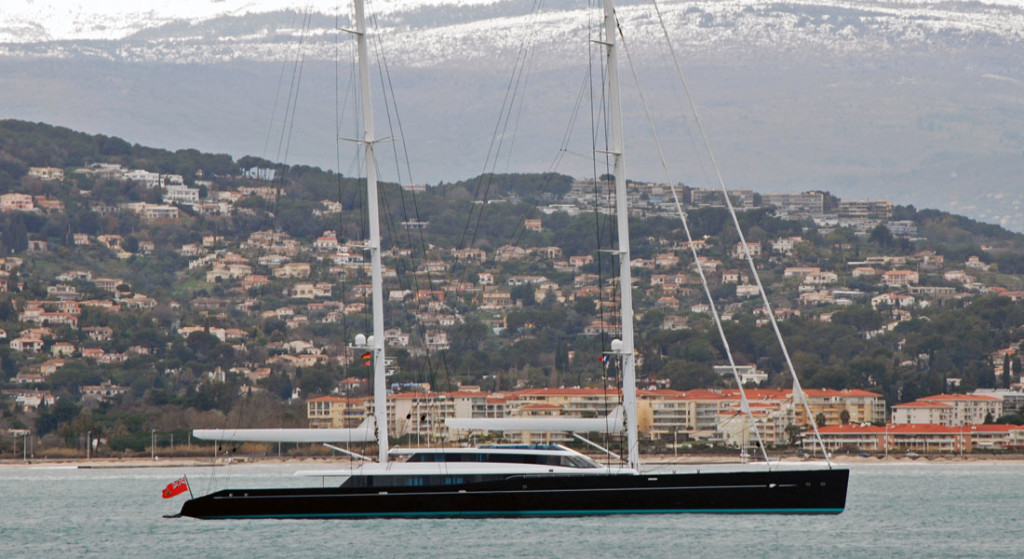 Coming in at 279 feet (85 meters) LOA, Aquijo has been in her owner’s hands for a few short weeks. Delivery means that she’s now officially one of the world’s 100 largest yachts afloat. Further significant, she’s the largest ketch in the world, and among the 10 largest sailing superyacht completed to date.

Aquijo was known by a few project names during build, among them P85 (designating her LOA in meters) and Y711. She was commissioned by a buyer who wanted to visit essentially all of the places around the world that can be reached by water. Her size certainly makes her self-sufficient. To ensure she remains every bit a true sailing yacht, Vitters Shipyard, which built her with Oceanco, devised a steering system for nimble handling. Vitters says it conveys the hydrodynamic forces affecting the rudder blades directly to the twin steering wheels on the flying bridge. This way, there’s instant feedback and enhanced connection, so to speak, to the yacht, much the way there is on far, far smaller craft.

The owner tapped Tripp Design for naval architecture, to ensure that Aquijo was truly performance-oriented. Bill Tripp, head of the design studio, says that she should be capable of 15 to 20 knots consistently. He adds that one of the first things the owner stipulated was that Aquijo have a normal sailing rig. This proved intriguing for his team “because it meant we would break the bridge barrier,” Tripp explains. That bridge is the Bridge of the Americas in Panama, spanning the entrance to the Panama Canal on the Pacific Ocean side. Therefore, it meant that the owner was prepared to have Aquijo sail around Cape Horn in Chile, one of the most hazardous shipping routes in the world. (It’s due to challenging winds and seas, an understatement if ever there was one.) “If the boat is capable of sailing around the world, we think those two things go hand in hand,” Tripp says.

He also says that the jib, the main, and the mizzen aboard Aquijo are virtually the same size. Loads get distributed evenly across her length. Her 295-foot (90-meter) masts are among the highest-rising in the world, too.

Though tough to discern in this photo, Aquijo comprises four decks. Imagine standing on any of them: Sight lines run clear from fore to aft on the upper levels. Spaces, particularly where alfresco areas abut interior ones, were configured to flow from one to the other without restrictions. While we do not have interior renderings or photos, the ambiance is said to be modern, created by Dölker + Voges. The nearly 49-foot (15-meter) beam should surely be elbow-room friendly.