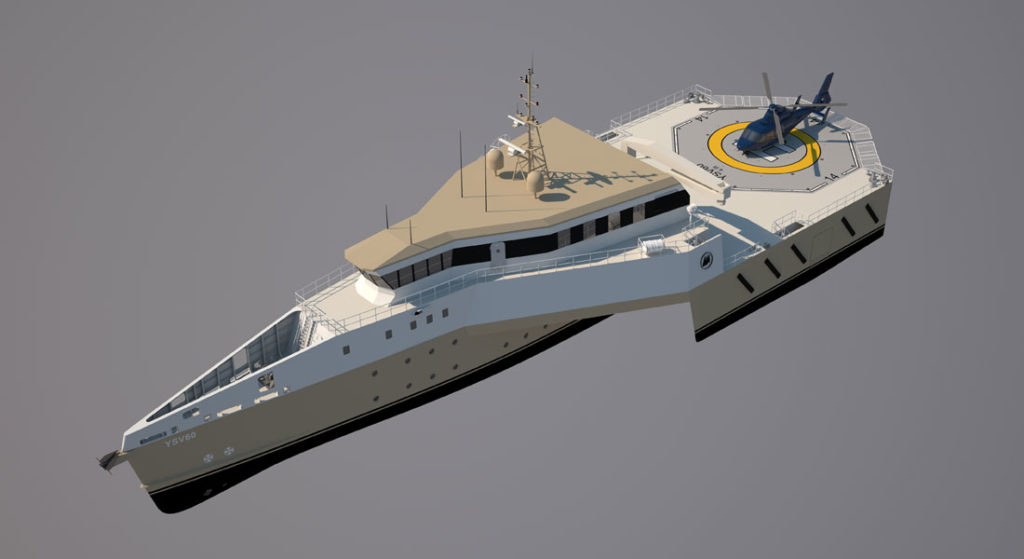 Marcelo Penna Yacht Design has contributed to a number of sailing yachts currently on the water, both production- and custom-built, plus a number of power and sail refits. The studio believes support vessels offer additional area for creative design input. It therefore came up with the YSV60.

“YSV” stands for “Yacht Shadow Vessel.”  Marcelo Penna Yacht Design drew inspiration for the 199-footer (60.68-meter) from a fast intervention supply vessel. In fact, the design studio has a sister company, MP Engineering, which planned such a ship. A fast intervention supply vessel takes cargo and personnel to and from offshore oil and gas platforms, and does so swiftly. Since MP Engineering used a trimaran hull, the YSV60 incorporates one, too. Multi-hulls are known for their stability, good fuel consumption, and more. 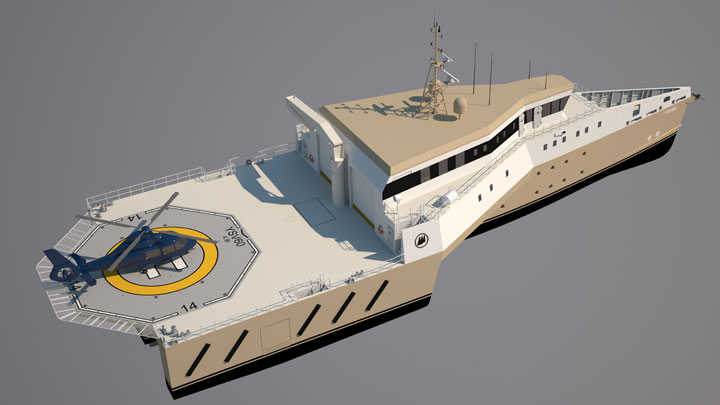 Fitting for a shadow vessel, the YSV60 serves several needs. She avoids being overcrowded, given the length and 68-foot (20.8-meter) beam. Furthermore, gross tonnage is 1,124. She has significant stowage for spare parts and other goods. Climate control is provided for those areas, too. She can even provide bunkering services for her mothership. Extra crew, personal staff, or guests can stay aboard, in accommodations for 12.

Of course, there are also plenty of places for tenders, toys, and support craft to stay. They go on deck and in dedicated hangars. Possibilities include a DeepFlight personal submarine, tenders to 36 feet (11 meters), several PWCs, and kayaks. The crane in the illustrations here, directly behind the superstructure, can lift and launch the daily preferences. Boarding and disembarking occur either alongside the YSV60 or aft. Marcelo Penna Yacht Design has included opening platforms to make it easier.

The support craft include two automobiles and a helicopter, the latter kept in a central hangar, not just intended for touch-and-go operations. In fact, among all the toys the YSV60 can carry, her helicopter is the most unusual. Marcelo Penna Yacht Design says she can cruise with a Eurocopter EC155B1, meant for 13 passengers and one to two pilots. That’s much bigger than the helicopters that megayachts and/or their support vessels usually carry. Refueling and maintenance can occur on deck, too.

Marcelo Penna Yacht Design pledges strong performance from the YSV60. Twin Caterpillar engines, with fixed-pitch propellers or waterjets, should permit a 23-knot maximum speed. Furthermore, the YSV60 should see transpacific range, between 4,948 nautical miles and 5,700 nautical miles, depending on conditions. Under power on just one engine, the vessel should achieve more than 7,000 nautical miles.