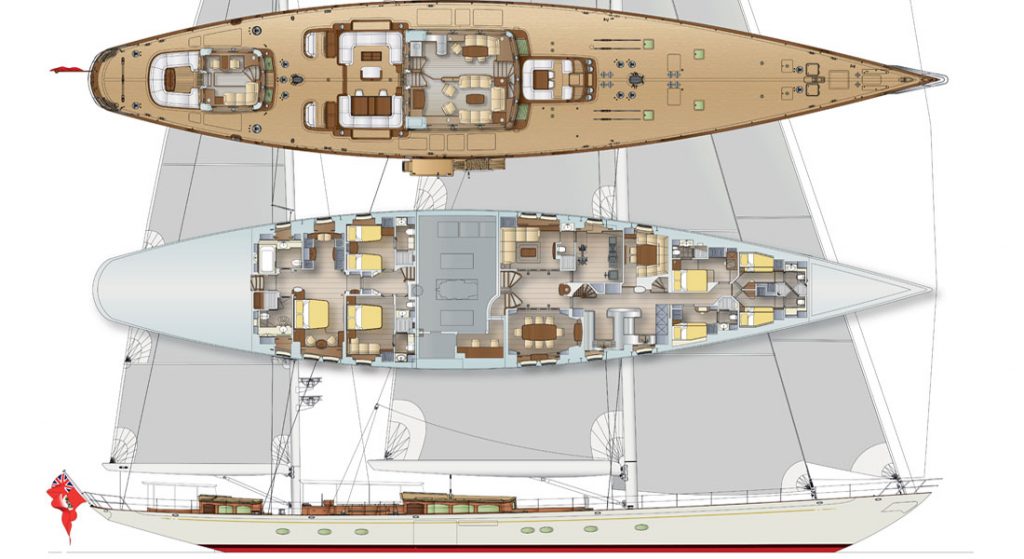 With cruising a priority, a seasoned sailor has commissioned a classic performance ketch from Vitters. LOA: 164 feet (50 meters).

Having some familiarity with Vitters’ projects, the owner decided to approach the Dutch shipyard. He already knew he wanted his new ketch built in The Netherlands, according to Vitters. The proverbial icing on the cake came with the delivery slot availability. “The fact that Vitters has the experience and flexibility to deliver this beautiful yacht in time for the 2019 season was a further benefit,” comments the yard’s project manager.

Having “high expectations” (also in the words of the project manager), the owner contributed a number of ideas to the design. The classic performance ketch comes from the drawing boards of Hoek Design, which has worked with Vitters on several projects. They include the famed sailing superyachts Adele and Marie. Featuring an Alustar aluminum hull, the yacht also has a centerboard keel and carbon fiber rigging. As you would expect these days, there’s in-boom furling, too.

The owner turned to Rhoades Young Design for interior design. The studio is no stranger to Vitters, either, collaborating with its team on Lady B and Mystere, for example. Suiting her classic performance ketch styling, the yacht will be traditional inside, though with some modern elements. Unfortunately, we cannot show you renderings of those details, at least at this juncture. However, the general arrangement is certainly customary. The owner’s suite sits aft, for example, within one of the two deckhouses. It also has direct access to a private cockpit. Time spent with family and friends will take place in the central cockpit. The crew will use the forward-most cockpit.

Primarily, four people will be able to stay aboard the yacht with the owner. They’ll get a double stateroom and a twin cabin. However, for a higher head count, a seating area will convert to a third sleeping space. Shoreside excursions will come courtesy of a tender stowed beneath the deck forward. Finally, this classic performance ketch will have two saloons and a space reserved as a gym.

Construction should begin before the end of this month.