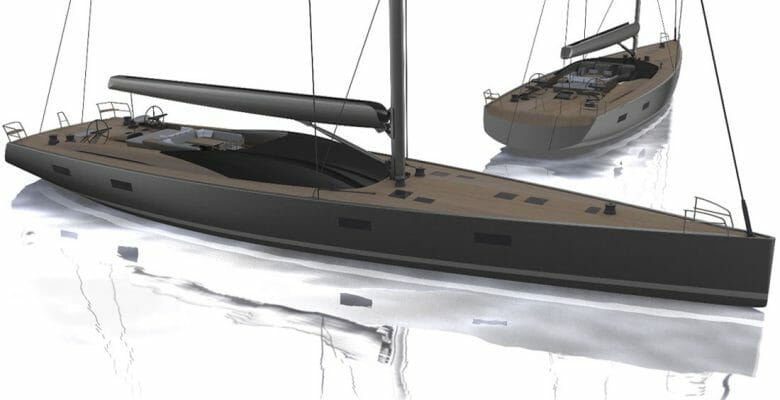 Eleven months from now, the first sailing superyacht from the combination of Vitters Shipyard and Malcolm McKeon Yacht Design should enjoying her maiden voyage. The carbon fiber composite hull for the 108-footer (33-meter) arrived from Green Marine, which Vitters owns, this week.

You may remember that when the project was announced last year, she was referred to as MM33, for her designer’s initials and her LOA in meters. Vitters is referring to her simply by her LOA, at least for now. The yard is revealing just a few new details for now. The interior, by Design Unlimited, will feature light wood tones. And, due to a lifting keel, the draft for this Vitters 33-meter will range from 12’3” to 16’4” (3.75 to 5 meters). It’s ever so slightly different than what was initially announced by McKeon’s office, just five inches combined.

Vitters further says that the owner wants a sailing superyacht equally adept at strong performance and cruising comfortably in various conditions. That ties in to the construction method, plus a waterline length of 98 feet (30 meters), maximizing usable space. And speaking of space, the interior should feel all the more airy due to a glass roof over the saloon. You can see it in the rendering above. Large sections of the glass roof will also open. As for performance support, back in September, McKeon stated that the sailplan would be 12,701 square feet (1,180 square meters) downwind.