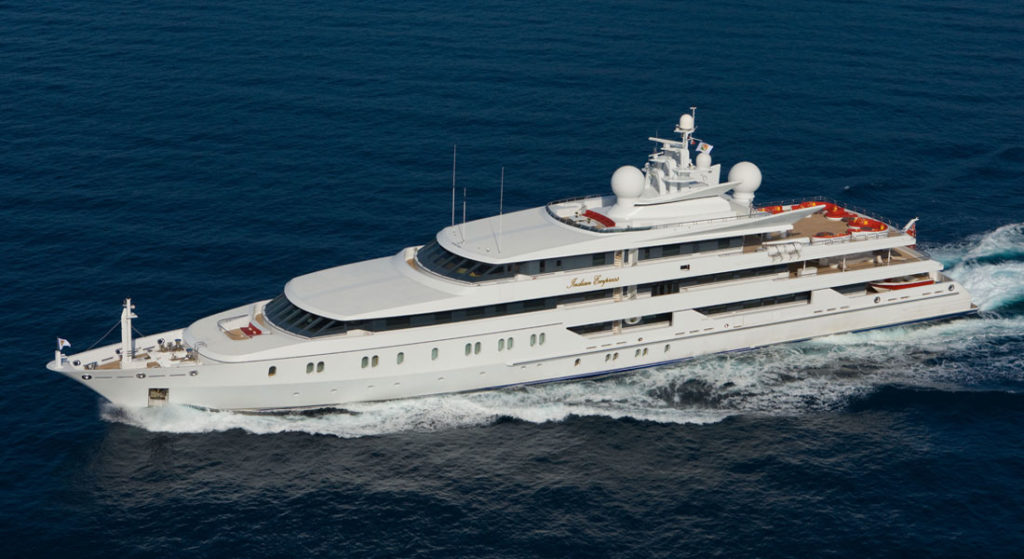 UPDATE, SEPTEMBER 26, 2018: The Maltese court has accepted an offer put forth on September 18. According to the Times of Malta newspaper, a company named Sea Beauty Yachting Limited offered €35 million, in a deal with Barclays Bank, a creditor. All registered creditors can now seek payment from that sum.

UPDATE, SEPTEMBER 20, 2018: The Indian Empress auction did not occur, but a buyer may still exist. The court has given Barclays Bank, one of the creditors, time to work out a pending deal with a potential new owner. The bank and the customer worked out their deal on September 18, the day before the scheduled auction. The court will decide either to grant that buyer ownership or to set a new auction by September 25.

Despite a bidder securing initial rights to acquire the yacht, another Indian Empress auction in Malta seems likely. A judge has denied a request for more time to furnish funds.

Nautilus International, the global trade union seeking unpaid wages on behalf of the megayacht’s crew, states that the buyer petitioned the court for a 15-day extension. The terms of the bid had required payment by July 5. This was one week after Indian Empress sold at auction for nearly €44 million (about $50.4 million at the time). The union says that it agreed to the request for more time. It believed “this offered the best hope of securing the remaining €234,129 wages owed to the crew,” according to a statement. (The wage total is approximately $275,000.) However, the union adds, a judge did not grant the extension.

Despite the denial resulting in further wage delays, Nautilus International agrees with the judge’s ruling. Danny McGowan, its strategic organizer, says, “It sends a strong message to those purchasing the vessel that yacht ownership is something that needs to be taken seriously.”

Interestingly, a lawyer for a creditor as well as bidders in the Indian Empress auction predicted problems. Ann Fenech, managing partner of Fenech & Fenech, shared concerns with us following the auction conclusion. She explained that the winning bidder, a Malta-registered company called Crediyacht, entered into a memorandum of understanding (MOU) to purchase the yacht before the auction. But, Crediyacht “was never in a position to pay,” she informed us. She added, “We’ll be watching the space.”

We reached out to Fenech today for comment on the current situation. She reiterated anticipating issues. According to Fenech, on July 5, Crediyacht’s lawyers filed an application “citing some pretty lame excuses for not having the funds ready.” She adds, “In our humble opinion, they were nothing but excuses, which really is no surprise, given that the owners of the Indian Empress had, the day before the auction, requested an adjournment of the auction.” That adjournment referenced the MOU, and that Crediyacht needed more time to pay the agreed price. “I am therefore not at all surprised that the same people have been unable to pay the purchase price within seven days,” Fenech states.

Neither does the judicial decision surprise her. “The judge was not going to have any of it,” she adds.

As of this writing, another Indian Empress auction may, or may not, occur. “It will now be up to any creditor with an executive title to request another judicial sale,” Fenech says.

Interestingly, Nautilus International anticipates one. It points to how three bidders submitted offers in June, among six registered bidders. Therefore, it expects one of them to file a new request. “We hope that the courts in Malta will be able to arrange a new judicial auction quickly,” McGowan says. In addition, he hopes “any other bidders are in a position to deposit the sums with the court without delay.” After all, “Our members have waited for long enough already.”

Nautilus International succeeded in having the 312-foot (95-meter) megayacht seized in Malta in March. It asserted that the owner, Indian industrialist Vijay Mallya, abandoned her there in September 2017. He further failed to pay the crew from that point onward. In yet another development, in an interview with Reuters this week, Mallya claims he hasn’t owned the yacht in more than seven years. He additionally claims he had a deal with the true owner, from the Middle East, allowing him to use Indian Empress one month each year. He declined to name the owner.

Nautilus International does not buy that argument, however. “If that’s the case, why did the wages stop being paid around the time of his assets being frozen?” asks McGowan. (International courts are seeking billions from Mallya due to the failure of an airline he once owned.)

If a new auction occurs, Crediyacht could still owe money. Fenech explains, “In the event that the purchase price at that sale is inferior to the 43.5 million fetched at the last sale, Crediyacht will have to pay the difference.”