You are here: Home / Yachts / Motoryachts / July American Superyacht Round Up on SuperYacht Radio 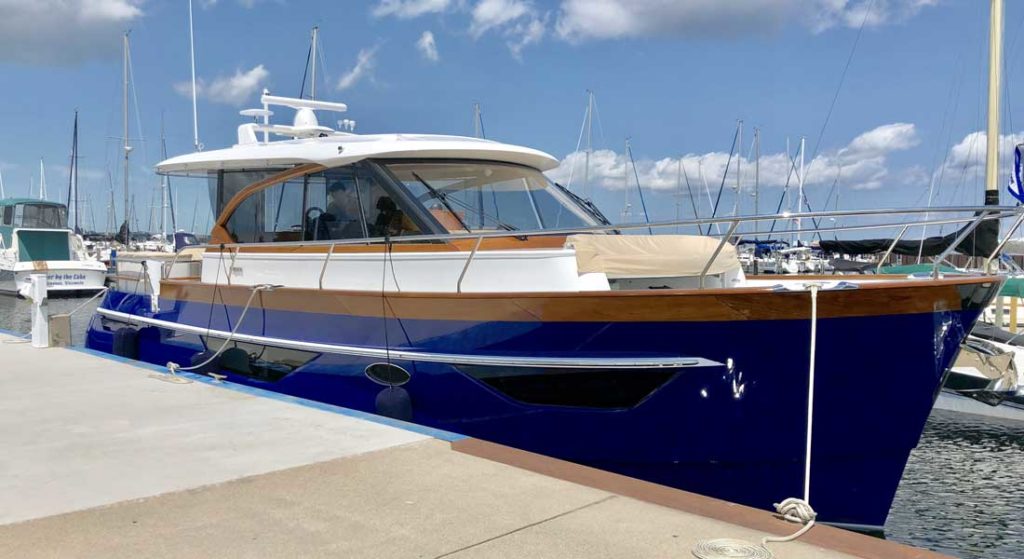 Despite what you might think, the boat pictured here is not just a fully custom build, but also one from Burger Boat Company. Blue Boat Home is a Burger 48 Cruiser, designed and built for an American yacht lover who long dreamed of owning a Burger she could handle herself. You’ll learn more about the project, and more, on this month’s American Superyacht Round Up on SuperYacht Radio.

Each month, our editor, Diane M. Byrne, provides insight into the latest news from this side of the Atlantic for the station’s audience. The broadcast studio is in Mallorca, Spain, with music, news, and interviews airing 24/7. SuperYacht Radio takes a global approach, reaching listeners from the Atlantic to the Pacific. It’s due to the transient nature of yachts, naturally, as well as the international spectrum of owners, advisors, crew, and more. Because of Byrne’s two decades of informing and educating American yacht enthusiasts, she is the go-to source for the American Superyacht Round Up.

Besides the Burger 48 Cruiser, Byrne discusses the fascinating plans of OceanX and the yacht/research vessel Alucia². If you’ve seen the critically acclaimed documentary Blue Planet II, you’ll be familiar with the pair. If you’ve read our coverage in recent weeks on OceanX, you’ll also be somewhat familiar.

What you may learn for the first time, however, is a superyacht refit center planned for Fort Pierce, Florida. In the American Superyacht Roundup, Byrne details how the city is weighing its options, for action later this year.

You can listen live to the American Superyacht Round Up via SuperYacht Radio at 6 p.m. Central European Time today. Either stream it on the website, or tune in via the Superyacht Radio app, compatible with both Android and iOS devices. The interview airs again tomorrow, at 12 a.m. CET and 12 p.m. CET. If you miss it, don’t worry. Visit SuperYacht Radio’s interviews page later this week to take a listen. While you’re there, you can check out several other interviews with leaders in the yachting industry. this, and other interviews.

The next American Superyacht Round Up airs in August. Stay tuned.