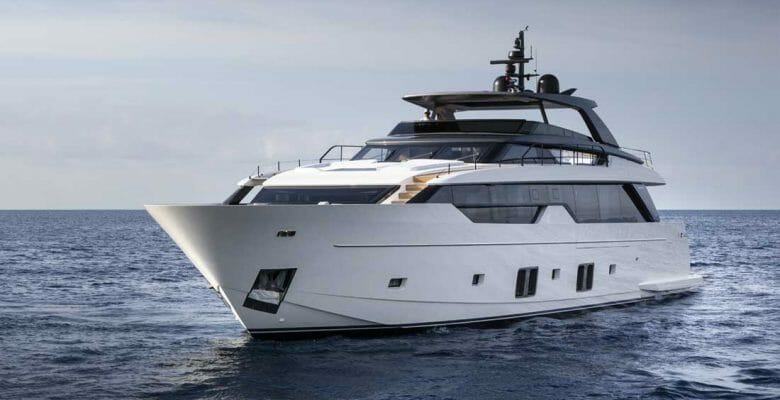 You don’t realize how conditioned you are to expect boats to be symmetrical until faced with one that isn’t. The Venetian gondola is the classic example, with one side famously longer than the other. This permits the gondolier to concentrate on his appoggio without having to continually correct his course. But, it’s so subtle that you don’t notice unless you’re looking for it. It’s the same story with the elegant new raised-pilothouse Sanlorenzo SL102 Asymmetric. The exterior is carefully styled to give nothing away. 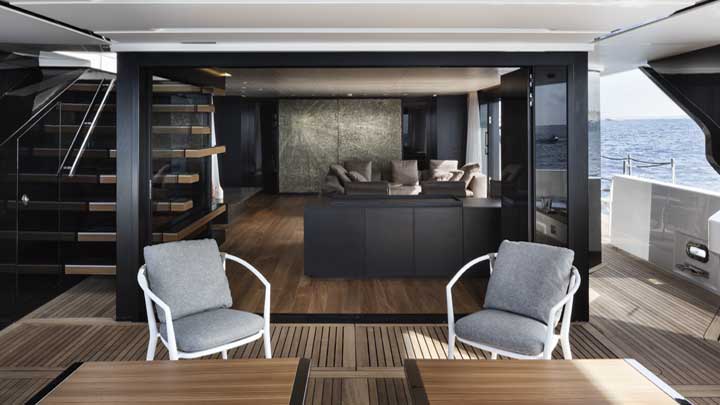 Indeed, everything seems fairly normal as you stroll up the passerelle. Once in the cockpit (above), however, you realize that this yacht is a little bit different. To port, the treads on that glass-sided flybridge companionway seem to float in midair. Beyond it, the saloon extends all the way to the gunwale, where the view over the water through the huge floor-to-ceiling window (below) feels precipitous. Across to starboard, sliding glass doors open onto a conventional side deck and a fold-out balcony.

This asymmetry is genuinely surprising. In some strange way, it makes the Sanlorenzo SL102 Asymmetric’s main deck feel more like an apartment than a yacht. Simultaneously, it adds significant volume to an already well-proportioned interior. 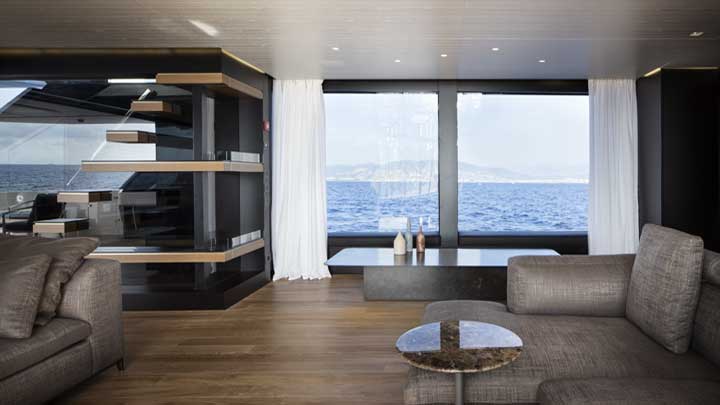 Outside, once you’re looking for it, asymmetrical thinking is everywhere. Since there’s no side deck on the port side, a walkway leads from the flybridge and down six steps to the bow. To starboard, the side deck runs all the way forward, emerging from the sheltering overhang for a short ascent to the bow. The asymmetry is far from creating deck-access problems for the crew, however. In fact, by making the flybridge a thoroughfare rather than a cul de sac, the layout actually improves it.

Layout options await inside, due to the Sanlorenzo SL102 Asymmetric being semi-custom. The standard Euro layout was on the yacht at September’s Cannes Yachting Festival, for example. It sees a bright and spacious main-deck master stateroom—full beam on just the one side, of course—and four en suite guest cabins down below. Those cabins can be doubles or twins. As an alternative, a large, open-plan country kitchen takes over the forward area, with a full-beam owner’s suite on the lower deck. Regardless, three crew cabins sit in the bow for up to five crew. Access is via the galley. 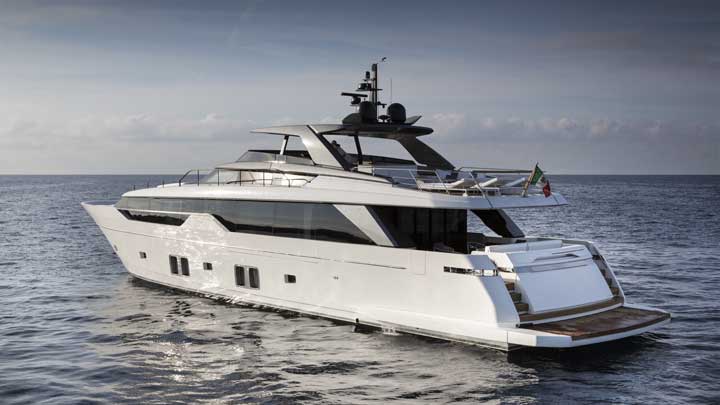 Featuring MTU 2000 Series engine options, for speeds up to 28 knots, the Sanlorenzo SL102 Asymmetric offers a decidedly different take on customary cruising. So, where did the builder get the idea for asymmetry? According to Sanlorenzo CEO Massimo Perotti, Chris Bangle, the ex-BMW designer with whom the shipyard began an association a couple of years ago, suggested it. “He advised us to try looking at things upside-down,” Perotti explains. “It’s a gamble. But for the crew, getting forward is no problem. From the master cabin, it gives easy access to the foredeck, and is also a quicker way up to the flybridge. We think it works.”