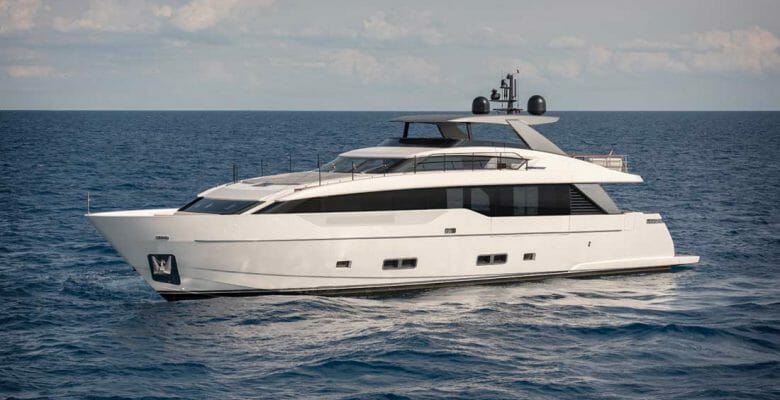 Two new megayacht models with more interior space are coming to the waters near you. The Sanlorenzo SL90A and SL120 join the yacht builder’s asymmetrical series.

That series, the first of which was the SL102, initiated after conversations a few years ago with the automotive designer Chris Bangle and the yacht designer Bernardo Zuccon of Zuccon International Project. The central concept comes down to usable relaxation space. The interior of the main deck is full beam to port, with the side deck rising up over it. On the opposite side, a typical side deck still exists. In profile, though, the asymmetric series superyachts still seem traditional.

The SL90A (above) is the smallest in the series so far. With an LOA of 90’6” (27.6 meters), she has a beam of 21’3” (6.5 meters) and accommodates a party of eight. In fact, the master suite is on the main deck, with access to the foredeck lounging area. That same lounging area is accessible from the flying bridge, too, though the latter has its own sunning space. The saloon, meanwhile, has full-height glass to create a lighter, brighter ambience.

Customers who enjoy island hopping or making fast work of getting from destination to destination will appreciate the Sanlorenzo SL90A as well. The shipyard expects a top speed of 29 knots with 2,000-hp MANs. Economical cruising, meanwhile, should be at 11 knots.

As for the Sanlorenzo SL120A (above), her LOA is 121 feet (36.92 meters), and she accommodates a party of 10. She’s the flagship of the asymmetrical lineup, too. Interestingly, Sanlorenzo chose to limit that asymmetry to just the main aft deck and saloon. Regardless, slide-open glass doors to starboard bring the outside in, while a lowering bulwark section to port essentially does the same thing.

Further noteworthy, the SL120A has a full-beam (24’9”, or 7.6-meter) master suite. Once again, you get direct access from here to the foredeck lounging area. Guests can reach it from either of two stairways leading down from a similar leisure area on the flying bridge. Plus, fold-down platforms at the transom create a 484-square-foot (45-square-meter) indoor-outdoor beach club. Finally, expect a 25- to 27-knot top speed depending on whether you choose Caterpillar or MTU engines, and a 10-knot economical speed.

In related news, Sanlorenzo has joined forces with Siemens Energy to develop methanol fuel-cell technology for its megayacht lineup. In fact, the technology will generate electricity aboard Sanlorenzos from 78 to 262 feet (24 to 80 meters) when engines and gensets are shut down. A prototype will go aboard a 164-foot (50-meter) hybrid-powered Sanlorenzo currently in an advanced design stage. The shipyard intends to build the yacht for delivery in 2024.

Additionally, Sanlorenzo and Siemens Energy are creating diesel-electric propulsion systems for megayachts between 164 and 230 feet (50 and 70 meters). Similarly, the companies are creating hybrid systems for smaller megayachts. The first project will be the new SD90S, launching next year. Sanlorenzo also says that in the future, some of these hybrid systems could integrate fuel cells.