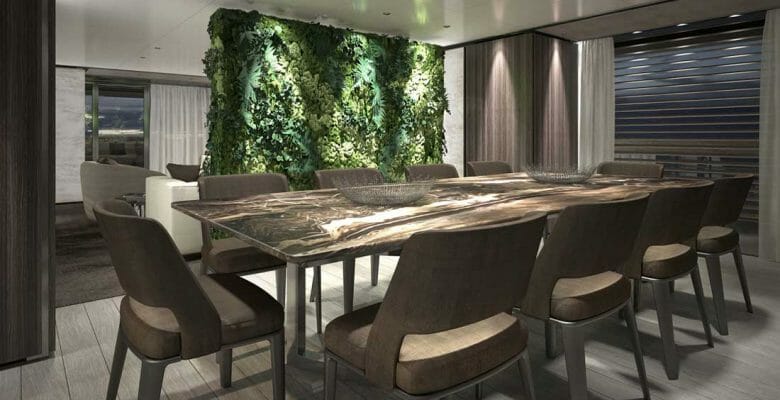 In 2020, CCN will officially welcome Panam as the newest member of its Fuoriserie “club.” A European client has commissioned the custom-constructed megayacht to be striking in style as well as speed.

The Fuoriserie series spans a variety of sizes. This is because every project is truly custom, a departure from CCN’s semi-custom yachts. The smallest, and most recent, Fuoriserie megayacht, for instance, is the 89-foot (27-meter) Freedom, commissioned by fashion designer Roberto Cavalli. The largest so far, meanwhile, is the 164-foot (50-meter) Elsea.

Just as every Fuoriserie is custom built, so, too, is she custom designed. The owner of Panam is working with Francesco Paszkowski Design for styling and interior design. Longtime studio collaborator Margherita Casprini is also contributing to the interior. A major focal point inside is the “green” wall, depicted at top. Lush greenery separates the dining area and saloon. It’s unusual for sure, but not the first time a megayacht has had a garden. And, of course, it should enhance the overall feeling of relaxation. 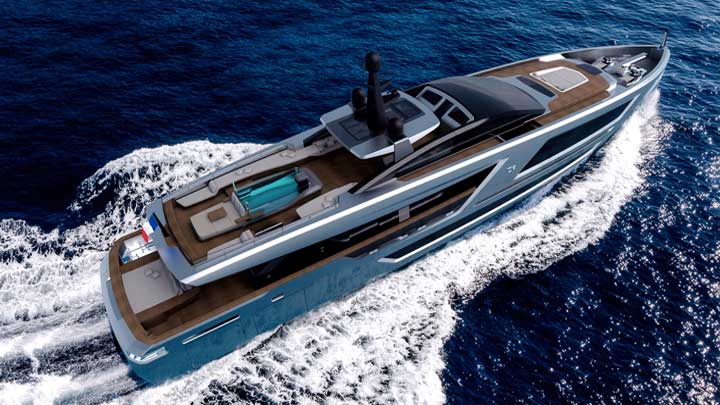 So, too, should the owner’s private hammam. It sits inside the master suite, full beam and forward on the main deck. Balconies to each side make the suite even more inviting. For together time with up to eight family and friends, the owner requested a beach club with a special feature. While it has three fold-down platforms, the aft-most platform is a transformer. In other words, it lowers into the water for the convenience of swimmers. Swimmers will also delight in the contra-flow pool on the flying bridge. The bridge, by the way, encompasses nearly 700 square feet (65 square meters).

Also for convenience, Panam has a floodable tender garage. The 17-foot (5.2-meter) tender will therefore be able to partially float in, just aft of the engine room. CCN says “partially” because it’s not intended as a drive-in garage.

Complementing her sleek looks, Panam is expected to be a spirited performer. CCN says she’ll see a top end of 31 knots and cruising speed of 25 knots. Triple MTUs coupled with KaMeWa waterjets provide propulsion. Some of the speed also comes courtesy of lower weight construction. While Panam will be an aluminum megayacht, some structures, like her radar arch and mast, will be carbon fiber.