You are here: Home / Yachts / Motoryachts / The Beast Nearing Delivery in New Zealand 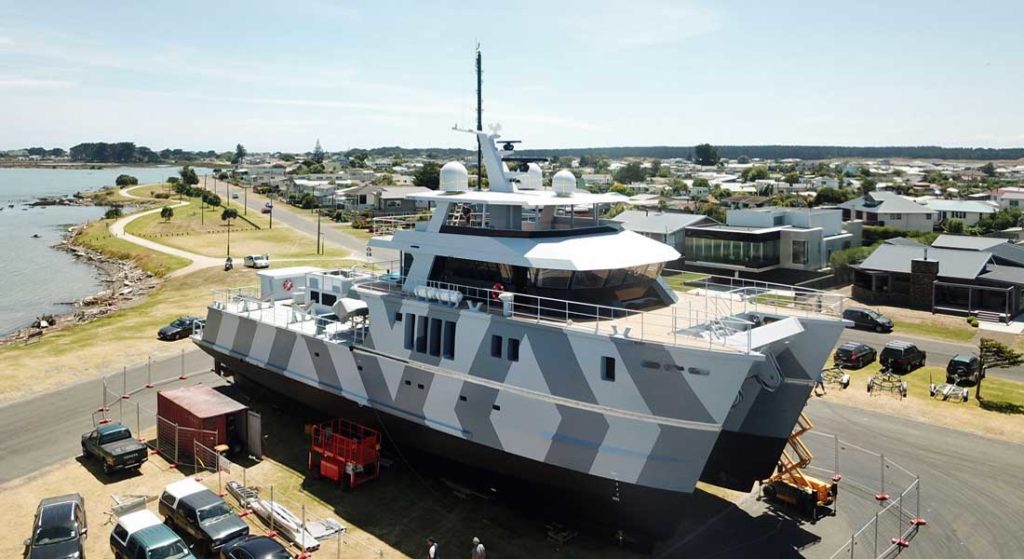 Traffic literally stopped in New Zealand in January, when The Beast made her way from her build shed to a nearby launch area. Though not yet conducting sea trials, the brawny, aptly named catamaran is nearly complete. She should begin entertaining her owners and charter guests in June.

The Beast began construction a few years ago, at Profab Engineering. Though not familiar to most yacht owners, the shipyard does have experience with motoryachts, as well as fishing boats and commercial vessels. Since the latter two go out in sometimes challenging conditions, that fact may have persuaded The Beast’s owners to seek Profab Engineering’s expertise. Those owners, Michael and Christine Hill, used to own the explorer yacht VvS1 (now Akiko), which prioritized function over fluff.

Word first emerged about the superyacht catamaran in 2017. Renderings of the 129’6” (39.5-meter) yacht revealed burly styling and an equally assertive paint job. The pre-launch photo here, from 37 South Yacht Charter, which will offer her for charter, reveal nothing has changed since then.

The all-aluminum yacht bears naval architecture by LOMOcean, which also contributed to the shadow vessel Charley. It, too, is a super-cat. While we don’t yet have renderings of the interior, the design is by Oceania Interiors. Previously, the company stated that the overall ambiance would be contemporary and even cutting edge. The Beast accommodates 12 in the owners’ party, along with 10 crewmembers. The healthy 39-foot (12-meter) beam means spaces should be more than ample. The 493-gross-ton volume underscores that idea, too.

Because The Beast is intended for adventures, the real emphasis is on her capabilities. She’ll be able to pick up her nearly 43-foot sportfishing tender with a specialized crane, for example. That tender stows right on deck. A nearly 30-foot (9-meter) amphibious tender will be aboard, too. In addition, the Hills plan to carry plenty of kayaks, paddleboard, and diving gear. And, that’s just the proverbial tip of the iceberg in terms of toys, reportedly.

While iceberg-laden waters may not be in the cards, long-range, remote cruising certainly is. The Beast carries more than 20,000 gallons (76,000 liters) of fuel.