You are here: Home / Yachts / Motoryachts / The Beast Is in the Water in New Zealand 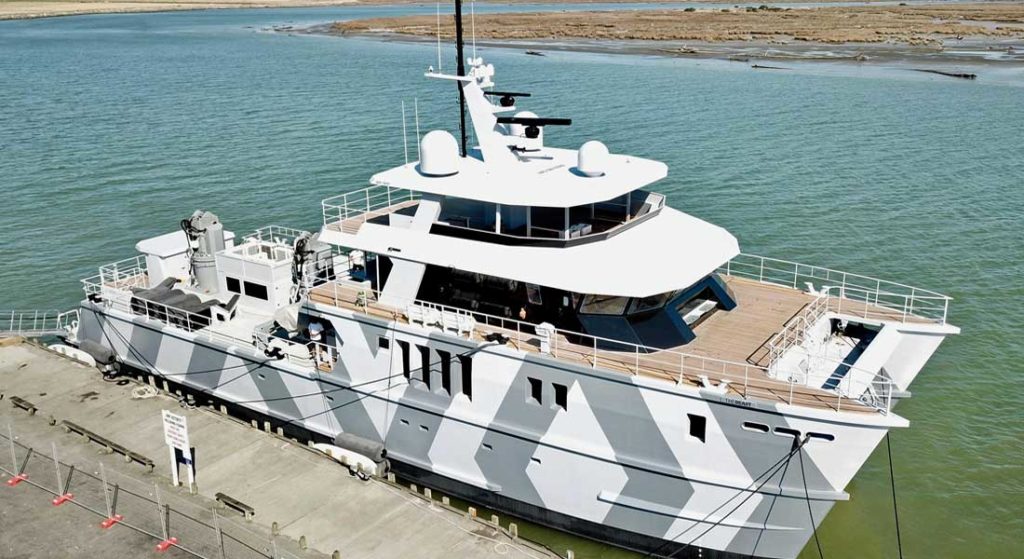 Twenty-two months after construction started, the super-cat The Beast is floating on her lines. Sea trials are on the horizon, with delivery set for about six weeks from now.

That partially explains the catamaran design, from the drawing boards of LOMOcean. The wider stance and twin hulls of catamarans tend to lend more stability in certain conditions. Measuring just shy of 130 feet (39.5 meters), The Beast has an impressive beam of 39 feet (12 meters) and volume of 493 gross tons. Equally impressive, she carries more than 20,000 gallons (76,000 liters) of fuel.

That, in turn, lends itself well to the adventure-seeking idea. According to Profab, the super-cat should see about 5,000 nautical miles while cruising between 12 and 13 knots. “It can go pretty much anywhere in the world but Antactica,” Carl Ferguson, the owner of Profab, tells the New Zealand Herald. The only reason she can’t, however, is because she doesn’t have reinforced hull plating for navigating in ice. 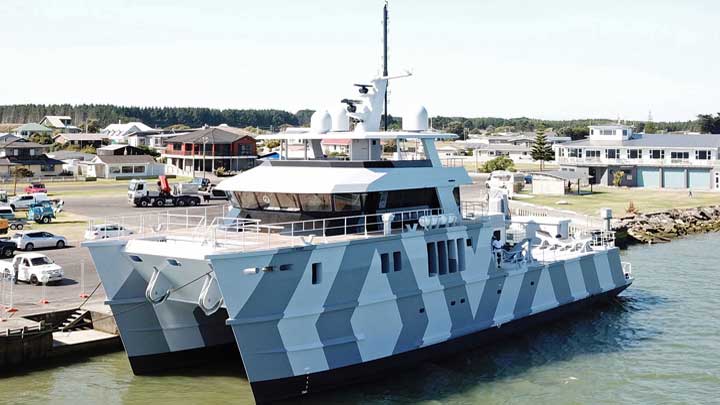 No matter, though, at least where the Hills are concerned. They reportedly plan plenty of cruising around the Southern Hemisphere. They’ll do so with up to 10 additional friends and family aboard, as well as 10 crewmembers. While still no word is available on the decor by Oceania Interiors, The Beast will tote watertoys aplenty. These range from kayaks and paddleboards to an amphibious tender, as well as a sportfisherman. The latter will sit on the aft deck, launched via a specialized crane.

Yacht watchers have been eagerly awaiting The Beast since build started in 2017. If you compare the initial renderings to the nearly finished yacht, you’ll see she’s remained faithful to the dramatically different design.

The Beast won’t just pursue private cruises. She’s also available for charter, via the central agency of 37 South Yacht Charter. You can book her for trips starting in June in New Zealand and South Pacific regions.