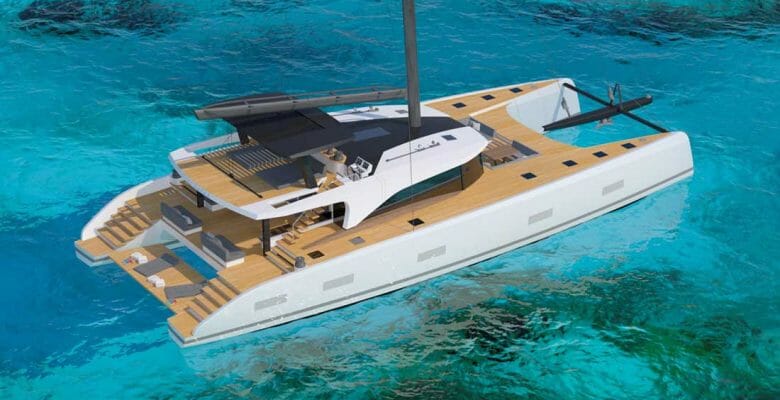 Noting that the multihull market is the fastest-growing segment in yachting, Southern Wind Shipyard has decided to create a semi-custom project to captivate attention. Called the SWCAT90, the carbon-composite sailing superyacht can suit fast cruising, charter, or simply private family time.

Measuring 88’6” (27 meters), the SWCAT90 leverages the biggest advantages of multihulls, including performance efficiency and space. In terms of performance, Southern Wind Shipyard turned to Berret-Racoupeau, well known for its catamaran designs, to handle naval architecture. The studio is ensuring that the mega cat will have reduced wetted surface, but also sail-handling options. Specifically, two sail plans are available, to broaden appeal. “While the cruising-oriented owner may prefer a fixed mast, the performance enthusiast may choose the larger sail plan with rotating masts,” explains Olivier Racoupeau. He adds that curved daggerboards with T-rudders will boost boat speed, simultaneously reducing pitching when waters get rough.

Space-wise, the SWCAT90 reportedly boasts the usable area and volume of a nearly 128-footer (39-meter). In fact, nearly 1,841 square feet (171 square meters) of floor space waits inside alone, according to Massimo Gino of Nauta Design. Nauta Design is responsible for both the interior design as well as the exterior styling for the new series. (On a related note, Nauta Design has collaborated with Southern Wind Shipyard on many projects to date.) Gino further says that the sailing catamaran has 50 percent more alfresco deck areas than a similar-size monohull. This alfresco areas include two cockpits, plus a flying bridge.

Since the SWCAT90 is a semi-custom project, buyers can have up to four staterooms for them and their guests. Crew, meanwhile, get either two or three cabins. Naturally, regardless of accommodation total, the guest and crew staterooms are separated for privacy.

Interestingly, Southern Wind Shipyard and Berret-Racoupeau are already counting on some buyers wanting hybrid propulsion. The yacht is available with traditional propulsion, too. But, a hybrid system would permit cruising in silent mode, since the engines could turn off and the battery bank could take over. Furthermore, “it also allows the two main engines to be independent from the shaft line, resulting in a greater efficiency as generators,” says Yann Daddadie, Southern Wind’s chief naval architect. Additionally, greater weight savings and space savings can result.

Range and overall performance depend on which propulsion system an owner chooses, as well as how big a battery bank goes into the hybrid system.