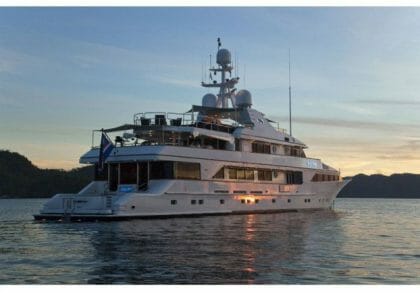 The 160-footer was in Panama and “headed for Haiti as soon as we learned of the catastrophe,” according to the yacht’s blog. They encountered serious weather in transit but stayed focused on their mission to bring supplies to an orphanage they were familiar with. According to an interview Scott did with her Scottish hometown newspaper, Harwick Today, Major Wager successfully delivered a ton of rice, 250 gallons of bottled water, 27 cases of canned food, and 15 cases of baby food, among other necessities.

As you can imagine, given the severity of the earthquake and the damage to infrastructure, it wasn’t easy. Here’s an excerpt from Capt. Rowan’s post on the yacht’s blog on January 24:

The security team from Mercy and Sharing are delayed, no surprise, nothing could move fast under these conditions. So we are standing by to offload in the morning. I decided to get underway and head back out of the area we were in today just to be safe. Actually I noticed the Navy and Coast Guard boats repositioning out more to sea and figure they are smarter than me, so I followed. It’s a real comfort to have them here. One of the ships is an Aircraft Carrier, they have been running flight operations nonstop all day. Every few hours we get a call on the VHF from one of the ships asking what our intentions are. They must question why this motor yacht is hanging around…probably think we are lost. When we advise them we are making a private supply drop and are waiting to make this happen with our people on land, they just wish us luck. That surprises me. I thought they would tell us to depart the area.

I sent one of our tenders in to have a look at the intended drop point at Arcahaie and they returned telling me about 300 people were camped on that beach. Families in makeshift shelter along with their goats and cows. We have an alternative location for tomorrow.

We hear some repairs have been made to the main pier in Port au Prince but still only one truck can be on the pier at any time! That’s a huge bottle-neck. It probably takes an hour to off load one container.

The newspaper reports that Major Wager’s crew eventually did use the alternative location, due to serious concerns. It quotes Scott as saying, “We were very proud of what we were about to do, but as the emails started to come in about the drop-off point, I certainly started to feel quite anxious.” Once they successfully offloaded the supplies, she says, the crewmembers felt good, though “what we did was a drop in the ocean.”

Capt. Rowan adds in his post that he and the crew were trying to help another private boat get medical supplies into Haiti from Miami and needed assistance in making it happen at Arcahaie, the drop-off point Major Wager had originally wanted to use. If anyone has information on how to do so, please post it here, and I will pass it along to him.