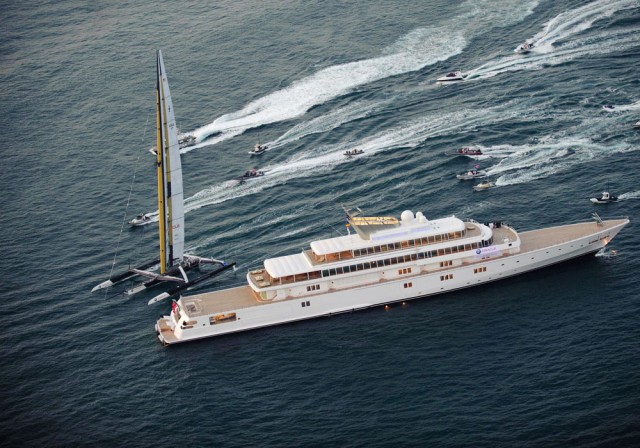 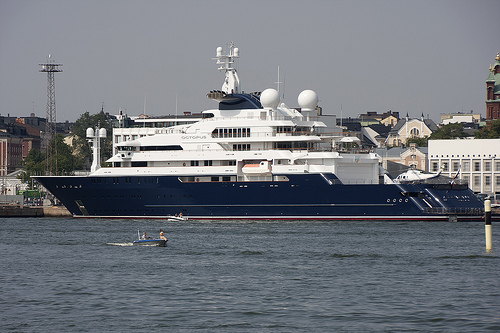 Shipyards and designers deserve the accolades they receive for the bold and beautiful yachts dotting waterways around the world. Of course, none of it would be possible without creative clients.

Which is why, for this edition of The Superyacht 6, we’re turning our attention to some of the more imaginative individuals who own megayachts. A few of the people listed below (in alphabetical order) are household names, while others are relatively unknown. Either way, their distinct visions have led to the creation of some of the most original and inspiring yachts afloat.

1. Paul Allen. When Octopus (above) emerged from Lürssen’s build shed in 2003, she landed atop every largest-yachts list produced by magazines and websites alike. Measuring an imposing 414 feet (126 meters), she was the third megayacht in the hands of Paul Allen, the American best-known for co-founding Microsoft. (He also owns sports teams and is a generous philanthropist.) Now, while Allen has never publicly commented on Octopus, it’s pretty easy to deduce that he didn’t commission her simply to brag. He has a strong sense of adventure, given that he previously cruised the Amazon, an area not exactly known as a yachting mecca. One look at Octopus’ rugged exterior, and you can tell she’s a yacht fit for pretty much any set of circumstances. Her itinerary over the past several years has proven she’s anything but a dockside denizen, so that’s why Allen is a visionary owner. Octopus has cruised all over North America, South America, the Caribbean, the Med, even China. Last September, she grabbed headlines for planning to transit the Northwest Passage, a notoriously difficult waterway 500 miles north of the Arctic Circle, and about 1,200 miles from the North Pole. Besides a swath of ice pack, the Northwest Passage is comprised of tricky channels and shoals.

2. Richard Beattie. If you don’t recognize his name, you’re not alone. But chances are, you know his yacht. Richard Beattie is a Hong Kong-based businessman who had chartered and cruised aboard a number of yachts over the years, before commissioning the 45-meter (148-foot), McMullen & Wing-built Big Fish. “I never had that ‘wow’ reaction aboard any boat I ever stepped aboard,” he says, until he boarded his dream yacht last year, which he’d been planning for three years. He conceived of a vessel that would invite a variety of different experiences and opportunities, all wrapped up in an anything-but-ostentatious package, what he calls “barefoot luxury.” He couldn’t find anything meeting his needs on the existing market, so he tapped the shipyard and Greg Marshall Designs to create it. Big Fish boasts a huge foredeck that can be a dance floor… a crow’s nest that’s the ultimate aerie (even a great morning-coffee spot)… guest suites that can convert for more or fewer guests… eco-friendly stone decking instead of teak decking… more refrigerators and freezers than restaurants have… and systems and engineering allowing her to go where most yachts don’t, including Antarctica. Big Fish continues to elicit the wow factor from Beattie. In his own words, every time he wakes up in his stateroom and draws the blinds, he says, “‘Oh, this is fantastic!’‘God, here we are!’’Oh, wow, this is bloody amazing!’”

3. Jim Clark. Silicon Valley entrepreneur Jim Clark is also a seasoned sailor. But he’s done more than simply commission big sailing yachts. He’s personally gotten involved in the planning and design of three of the most famous ladies to grace the waters: Hyperion, Athena, and Hanuman. The latter two remain in his hands and are as different as they can be. Athena is a three-masted schooner that’s the largest all-aluminum yacht to date, measuring 90 meters (295 feet). She was conceived as a luxurious cruiser, with ample rooms and deck spaces. She’s a spirited performer, too, capable of nearly 19 knots. She’s cruised a variety of places from the Med to the South Pacific. Meanwhile, while Hanuman may be far smaller, at 41.3 meters (136 feet), she’s no less impressive. In fact, in some people’s eyes, she’s more impressive, as she’s a thoroughly accurate replica of the renowned J Class yacht Endeavour II from 1936. She’s proven her mettle on the regatta circuit, too, having raced other Js like Ranger and Velsheda.

4. Larry Ellison. Similar to Paul Allen, Larry Ellison enjoys building and owning superyachts. Rising Sun (pictured above in 2010, with the BMW Oracle USA17 trimaran that won Ellison the America’s Cup) eclipsed Octopus as the largest American-owned yacht upon delivery from Lürssen in 2004. Her nearly 453 feet are dominated by some of the largest—and most numerous—windows to adorn a yacht. Her aggressive stance, from the drawing boards of the late Jon Bannenberg, is bolstered by a top speed of 28 knots. Considering most yachts even half her size don’t come close to that, it’s all the more impressive. Even though Ellison recently sold Rising Sun to media mogul David Geffen, he holds a place on this list for having conceived of the yacht in the first place.

5. Anto Marden. A Hong Kong-based yachtsman, Marden has enjoyed sailing for many years. But when he finally decided to commission a motoryacht, he didn’t abandon his sailing roots. Instead, he commissioned a trimaran from designer England-based John Shuttleworth, whom he’d known for many years. The result is the 40-meter (131-foot), all-fiberglass Adastra, under construction at a facility in China owned by Australia-based McConaghy Boats. Shuttleworth is known for fast, sturdy yachts, many of which have won prominent races and further broken long-distance ocean sailing records. Marden selected McConaghy because of its experience constructing maxi yachts like Alfa Romeo and the ICAP Leopard (the world’s fastest monohull). McConaghy also has built Olympic Class Elliott 6m yachts. Set for delivery this year, Adastra will be a true luxury cruiser that will frequent Indonesian waters. Power will come from a single 1,000-hp Caterpillar http://www.marine.cat.com engine, topping out at 24 knots yet consuming less fuel due to the efficient design.

6. Andrey Melnichenko. Love her or hate her, the motoryacht A is remarkable for being unlike anything else on the water. Hats off to Andrey Melnichenko, the young Russian banking and business billionaire, for daring to be different and for tapping the equally different-thinking Philippe Starck to design the 394-footer. Baccarat crystal tables, stingray skin (whitened, perhaps to complement the white furnishings throughout), a ceiling-mounted TV, padded walls… the list of interior decor features is at once singular and strange. And that probably suits Melnichenko just fine.