You are here: Home / People / Designers / The Superyacht 6: 6 Upcoming Yacht Designers to Watch 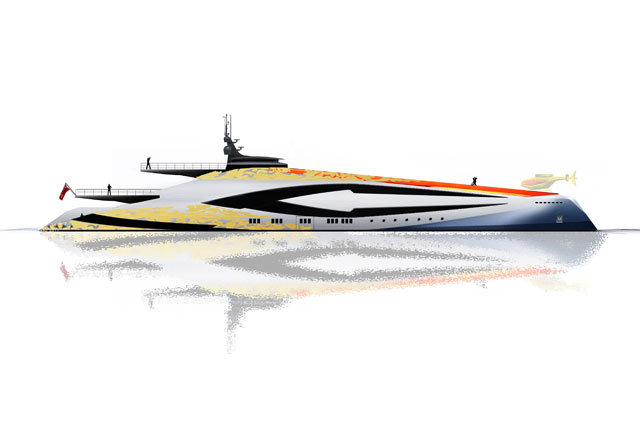 Nearly every week, yacht designers, whether seasoned or super-new, send illustrations of their latest projects. Some are commissioned by clients, while others are pure concepts. Megayacht News typically avoids publishing concept projects, as unfortunately many we’ve seen over the years never had a chance of making the engineering leap into reality. However, the amount of creativity out there, and the number of these designers teaming with naval architects and shipyards, is growing.

So, we started thinking about who seemed to have promise. This edition of The Superyacht 6 showcases, in alphabetical order, some of today’s up-and-coming designers. A few are young guns looking to capitalize on winning prestigious design competitions. Others are older salts who have fresh ideas on environmentally friendly systems. Ultimately, all are striving for a bigger break.

1. Craig Cunningham. It’s a long way from his native Cape Town, Africa, but London is where Craig Cunningham is turning out creative catamaran designs. His goal is to attract the attention of large design studios and gain further experience. He’s already worked with KKG (Katamaran Konstruktions GmbH) in Vienna, Austria, developing the interior for a 20-meter (66-foot) motoryacht catamaran. Endless Summer, seen in the virtual-reality video below, is slightly larger, at 25 meters (82 feet). She’s an updated version of the design he submitted to Camper & Nicholsons’ annual design competition in 2004.

2. Alex McDiarmid. McDiarmid Design has motoryacht, sailing yacht, and catamaran designs in its portfolio. But its most recent concept, Duel (above), dares to be different and has already attracted the attention of brokers and owners’ representatives as well as a shipyard (the latter of which Alex McDiarmid, founder of the design house, is keeping confidential at this time). The 100-meter (328-foot) megayacht intentionally pushes a non-nautical design philosophy. The profile draws inspiration from pistols dating back to the 17th century. Even the radome tower mimics the hammer of a gun. Inside, the owners have a deck to themselves, and all guest staterooms are on the main deck. With the input of a naval architect, McDiarmid estimates that Duel will cruise at 15 knots and top out at 20 knots on diesel-electric power.

3. Antonio Romano. One of the three designers of the Milan-based Hot Lab team, Antonio Romano is passionate about many different sizes of yachts. Hot Lab worked with Filipetti Yachts for the 95-foot Biscuit, handling exterior and interior design. It’s further collaborating with Icon Yachts, Oceanco, and others on some concept designs. In fact, the Icon project, Icon Milano 73, will be showcaed in Icon’s stand at the upcoming Monaco Yacht Show. The 73.3-meter (240-foot) design is based on a proven hull form and has an abundance of glass, including skylights, plus an upper deck that can hold a greenhouse.

4. Richard Sauter. Sauter, the head of Sauter Carbon Offset Design, is squarely focused on highly environmentally friendly yachts. He’s gaining ground: He presented a paper about a concept yacht deriving power from the sun, wind, and waves at a RINA conference in May. That brought him to the attention of Ned Ship Group, which wants to develop a series of carbon-neutral yachts. Their first collaborative project is the Emax Excalibur, a 22-meter (72-foot) yacht. Highlights include a wavepiercer hull, photo-voltaic panels covering her superstructure, and hybrid diesel power. Thanks to these, the Emax Excalibur is intended to enjoy “carbon neutral” cruising at 18 knots for an astounding 3,000 nautical miles.

5. Pieter Van Geest. The founder of Van Geest Design got excellent training under the tutelage of Ron Holland Design, contributing to superb superyachts like Mirabella V. Now working with a design partner at his eponymous company, Van Geest specializes in both styling and interior design. Among other things, Van Geest successfully caught the attention of Proteksan Turquoise with a recent 80-meter concept, and other shipyards have requested the basic framework be tailored to their clients’ preferences as well.

6. Yacht Island Design. Remember The Streets of Monaco concept? Of course you do. Anyone who’s turned on a PC within the past few months and searched for anything on megayachts was hard-pressed not to see this concept design. We’ve included Yacht Island Design on this list if for no other reason than the sheer imagination-gone-wild approach. Whether you think the floating go-kart track is sheer silliness or sheer genius, you have to admit that Yacht Island Design strives to create truly one-of-a-kind designs. And isn’t that what a megayacht owner deserves? Who knows, maybe Yacht Island Design’s newest creation, called Tropical Island Paradise, will catch on. It has a waterfall feature, after all—though it’s part of a mountain…