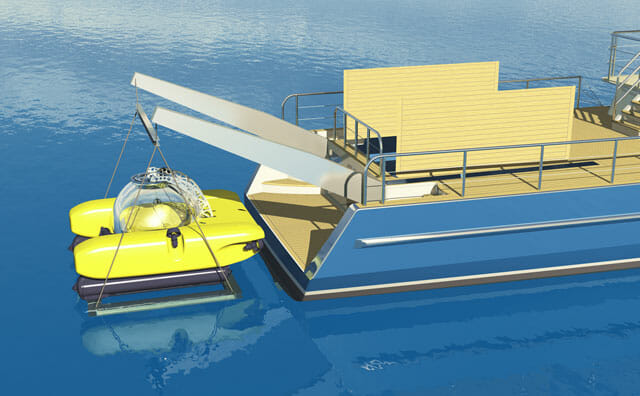 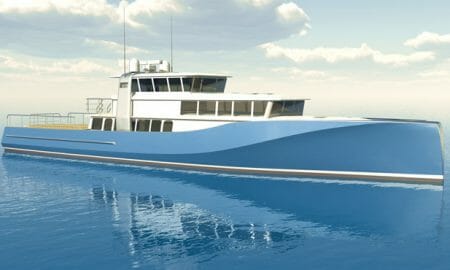 Here’s an interesting twist on a concept project: This 95-foot (28.95-meter) megayacht was conceived not by a design house on its own or even a shipyard, but by a personal sub manufacturer. Specifically, Triton Submarines tapped Bury Design to create a serious transoceanic passagemaker whose primary purpose is to tote a Triton 3000 two-person sub.

Bruce Jones, CEO and founder of Triton Submarines, says he and his team outlined a detailed design brief and presented it to a number of naval architects. The brief called for a primarily owner-operated yacht with a steel hull and aluminum superstructure. Other necessities included:

Why these specifications? “I have extensive experience at sea in powered passagemakers,” Jones says. “Most are designed to maximize accommodation for the overall length, which really compromises their sea-going comfort and efficiency. Many of the naval architects we interviewed had a very difficult time breaking the mold of their experience. It was surprising how many of them tried to talk us into ‘short and fat’ designs.”

Paul Bury of Bury Design was not one of them. Prior to setting up his own shop, Bury was chief designer at Tripp Design and, previously, an in-house designer for Wally. Having sailed in two Sydney to Hobart races and two Newport to Bermuda races further gives him an appreciation for designing seaworthy, comfortable craft. “Paul, with his experience at Wally Yachts and Tripp, immediately embraced the overall concept and, indeed, had designed highly efficient hulls that were similar, making him quite unique,” Jones explains. “The match has been perfect.” Bury adds, “I had some long-range motoryacht concepts already drawn up, all running on high-efficiency hull forms. The fit with Bruce’s requirements was very good, and together, we progressed the design quite quickly.” 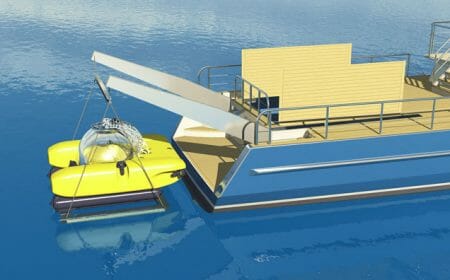 For good seakeeping and efficiency, the support yacht’s waterline length is the same as the LOA. Tied to efficiency and to fulfill the narrow hull requirement, maximum beam is just 17’5” (5.3 meters). Another efficiency factor: lower-horsepower engines than most megayachts of this size. The support yacht will have twin 231-hp John Deere diesel engines, which should be capable of providing a 12.5-knot cruise speed and a 14.5-knot top speed. Range at 12 knots should be more than 5,000 nautical miles, a range that Triton Submarines’ team also specified. The single-shaft propulsion system will allow the yacht to run on just one engine when needed. Ideally, though, Bury says the yacht would feature diesel-electric propulsion. Either way, the 95-footer is designed to Lloyds SSC classification standards. She’ll also carry 5,151 gallons (19,500 liters) of fuel.

Since the Triton 3300 submarine is the centerpiece of the design, a large stowage area aft is dedicated to it. As the illustration here shows, two deck hatches open to retrieve and stow it, handled by twin hydraulic arms that extend out from the transom and rotate up. Crewmembers can access the sub’s stowage area as well, via personnel hatches. When the Triton 3300 is in the water, it can dive to 3,280 feet (1,000 meters) and travel at 3 knots.

Because the 95-footer has a heavy emphasis on exploration, the general arrangement is far different than that of similar-size megayachts. Just inside the aft deck is a workshop, for example, with stairs down to the engine room. A guest stateroom is forward to port, opposite a pantry and day head. The saloon is farther forward, ahead of a spiral staircase and open to the galley. A second, full-beam guest stateroom is immediately below decks, with two bunk-berth crew cabins situated fully forward. The uppermost deck is dedicated to the pilothouse, with a single helm chair and an L-shape settee and table just aft.

In recognition that explorations will sometimes come with entertaining, Bury Design has designated the sub’s twin launching arms to also handle a tender, stowed on the swim platform. In addition, when the sub hangar hatches are closed, the expansive aft deck can host cocktails.

Jones says that while the design was initially driven by his firm’s desire to own the yacht, “we now have interested additional clients.” Bury adds, “We have approached builders to gauge interest and will be sending out a comprehensive preliminary specification to allow costings to be established.”