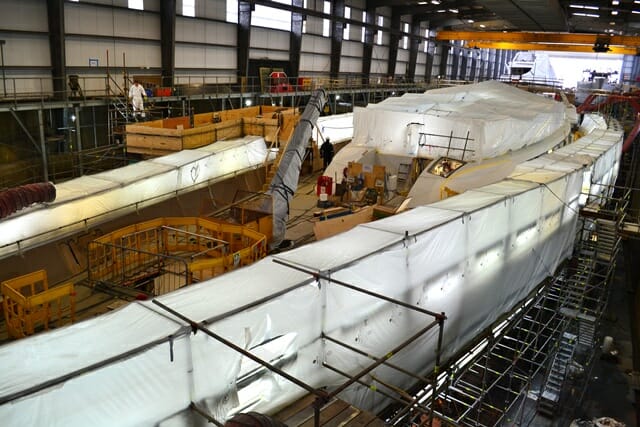 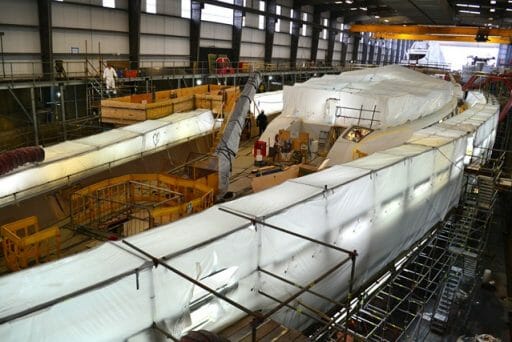 The yearlong refit of m5, formerly known as Mirabella V, is about six months into completion at Pendennis Plus, Pendennis’ refit facility. The world’s largest sloop, at 247 feet (72.5 meters), will be nearly 257 feet LOA, or about three meters longer, upon completion—and as the photos here show, that extension is already well on its way to being finished.

While Mirabella V arrived at Pendennis in March, most of the work clearly was going to be done on site, though some needed to be started elsewhere. Specifically, Green Marine was tapped to manufacture her new stern. Now in place (below), it doesn’t just add to m5’s intended new LOA, it gives the megayacht an entirely new look. It’s also worth noting that this extension is constructed entirely of composite, while the rest of m5 is aluminum. 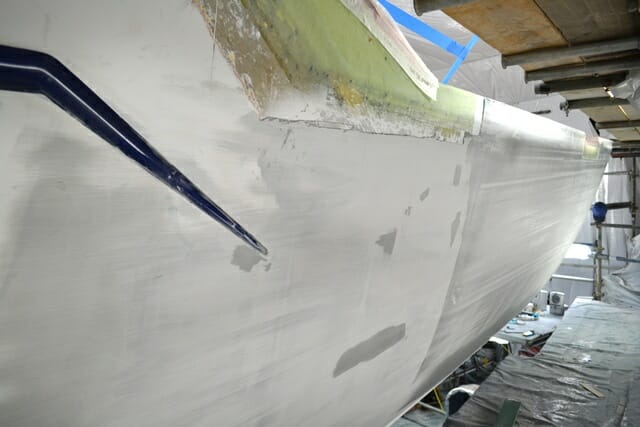 Ron Holland Design, the super sloop’s original naval architect and the designer behind m5’s refit, created a more subtle tumblehome, slightly flared up and out. Compare what Mirabella V looked like originally, immediately below, with the artist’s rendering of m5’s final look, directly beneath that. You’ll certainly see a dramatic difference. 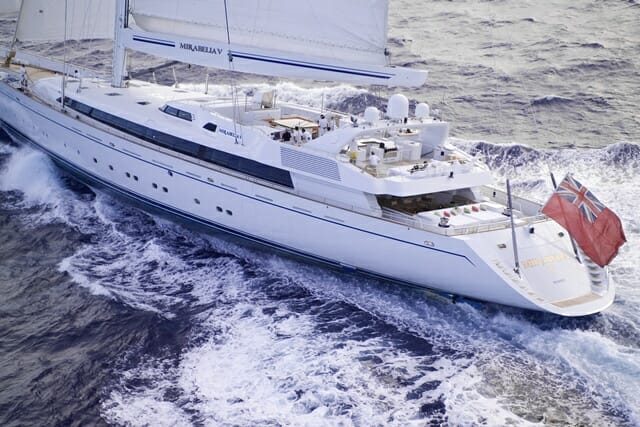 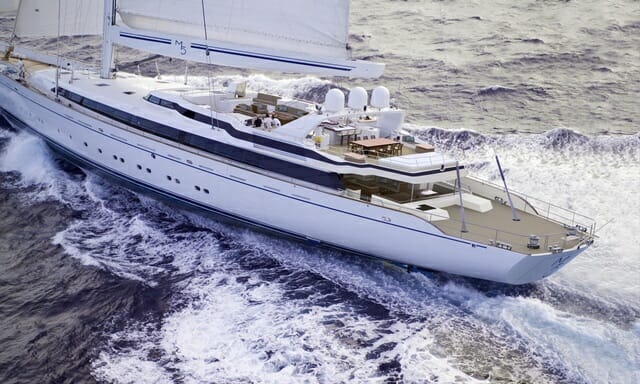 The transom of m5 isn’t the only area that has been restyled. The megayacht also now has a longer flying bridge. The new owner wanted more social space, so Pendennis and Ron Holland Design worked together to extend the deck out from the radar/satcom arch. Some of you may find it difficult to imagine the eventual design, given the bare construction material here (the photo is taken from above and forward of the extension, looking back over it and down over the curing cockpit extension). But, try to picture a large alfresco dining area, followed fully aft by a big sunning space. These are replacing fixed furnishings, which included the sunpad but not the dining option. Should the owner have a large party aboard, the dining table and chairs can likely be moved aside, too. 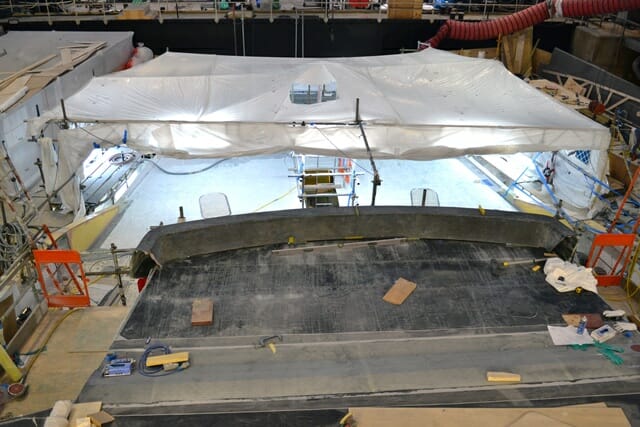 Take all these images into account, and you get a better overall idea of how much work has already been done. All deck hardware and teak decking was stripped months ago, and the mast was removed to allow m5 to enter Pendennis’ enclosed shed. Some major milestones are on the schedule for the next few weeks, too. Aft along the port side of m5, there will soon be a side-boarding platform added. By the time you’re reading this, Pendennis’ craftspeople should have already cut out the opening for it. A subcontractor is making the door, which will then be put into place. Since there’s a good deal of hull length unaffected by the work, Pendennis’ team can then start the repainting process. Not to imply that m5 is all bare metal; the shipyard has already primed some areas, in anticipation of the door going in and then everything being ready for repainting.

There’s still plenty of other work going on that you can’t see. The engines, gensets, shore-power converters, and even wiring have already been removed, as have the furnishings, decorative wood paneling, and more. Unless you’ve been aboard a yacht under construction, you probably wouldn’t recognize the master or guest suites, as they’re akin to just framed-out spaces. The owner hired Redman Whiteley Dixon to design what’s said to be a contemporary decor. The first few components, manufactured by Pendennis and interior specialist Superyacht Interiors New Zealand, should start going into place this month.