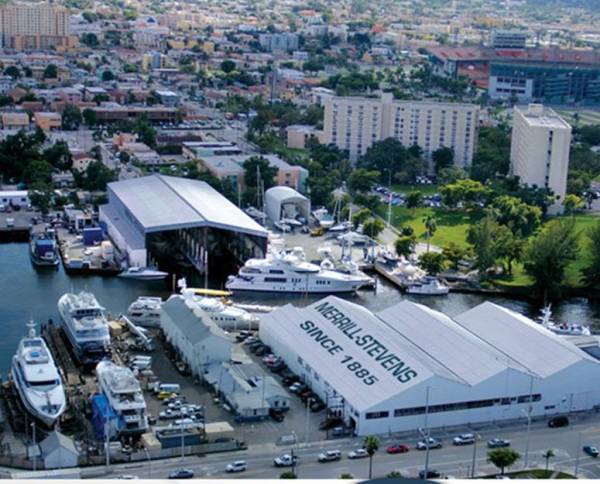 Founded in the 1920s, Merrill-Stevens has long serviced yachts and megayachts to 155 feet (47.2 meters). It’s one of the oldest yacht yards in the United States, as well as the oldest continually operating business in Miami. After years of financial difficulties and a foreclosure judgment, Merrill-Stevens sold in June 2011 to Marlow Marine. David Marlow, head of Marlow Marine, planned to bring work back, plus invest heavily in machinery and facilities. Marlow Merrill-Stevens did indeed perform refits and maintenance on a variety of yachts.

RMK Merrill-Stevens Properties’ ownership came to light following published interviews. Most of them are with John Spencer, a minority stakeholder and owner of Spencer Boat Company. Spencer Boat Company has been leasing space on Merrill-Stevens’ site since 2010. In the interviews, Spencer reveals that Rahmi M. Koç, chairman of the Koç Group, is the majority shareholder. The Koç Group owns RMK Marine, the builder of Nazenin V and other megayachts, including the Oyster Superyachts series.

The Miami Herald quotes Spencer as stating, “I firmly believe this is good for the Miami River, it’s good for the industry, and it’s good for South Florida.” He also tells the South Florida Business Journal that Koç visited Merrill-Stevens while it was bank-owned, and the two became friends. “He retained an interest in the facility for several years,” he states. “I had pleasure of being his guest in Istanbul for a very nice week. We became friends and decided to go ahead and see if we could purchase the property from Mr. Marlow, which we did.”

Josh Bennett, an attorney for RMK Merrill-Stevens Properties, tells the South Florida Business Journal that Koç is preserving the management team and will likely renovate the site.