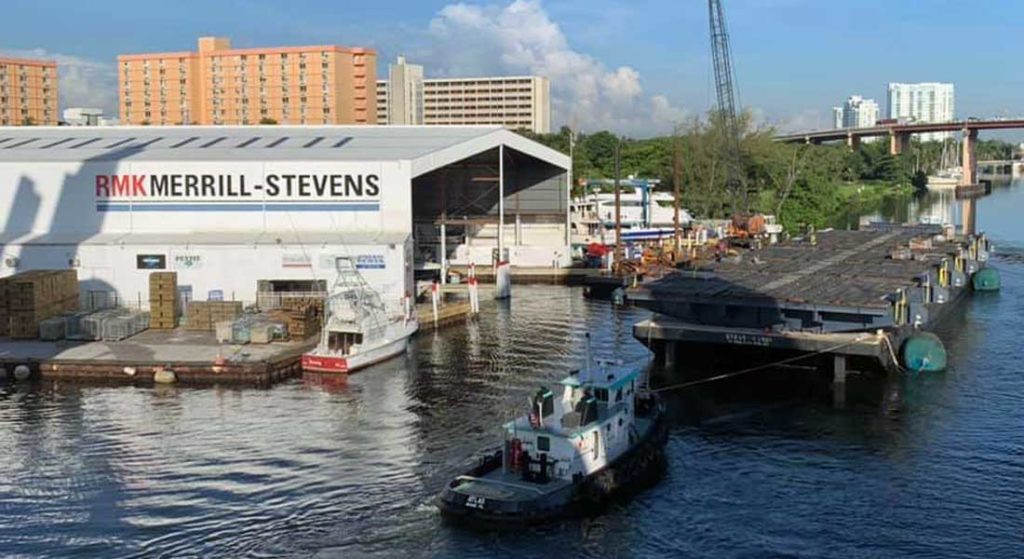 Even if you don’t know his name, you are certainly more than familiar with his invention. Raymond Pearlson, a naval architect and marine engineer, invented the Syncrolift shiplift system in 1957. What’s more, this resulted because of a 300-ton lift and transfer system he created for the then-named Merrill-Stevens shipyard in Florida four years prior. Just this week, RMK Merrill-Stevens replaced that 300-ton system with a 2,700-ton shiplift from Pearlson Shiplift Corporation, run by Douglas Pearlson, the son of the 93-year-old inventor. It’s the latest milestone in the refit yard’s ongoing expansion and renovation.

RMK Merrill-Stevens has been alongside the Miami River in Miami since the 1920s. RMK Marine acquired the facility in 2013. Comprised of the North Yard and the South Yard (on opposite sides of the river), it’s been overhauling its facilities for the past few years. Due to struggles under prior owners, the property was not well maintained, nor did it keep up with the times. Therefore, much of the ongoing renovation work has focused on creating new buildings and modernizing equipment. Furthermore, specific to the North Yard, the modernization is permitting the refit yard to target much larger megayachts. It’s where the new 2,700-ton lift now sits.

In fact, the new lift will allow RMK Merrill-Stevens to service superyachts to nearly 72 meters (235 feet). “This is larger than anything else in South Florida and gives us the opportunity to service all of the yachts and megayachts that visit Miami because of its status as a global destination,” Aaron Leatherwood, the shipyard’s president and CEO, tells Miami Today.

As for the elder Pearlson, listen to him tell his story in the video above. “It’s exciting that something I designed, something that I created, is going to be put in the same yard where I built the original one,” he says. “There’s a great future for RMK Merrill-Stevens here.”