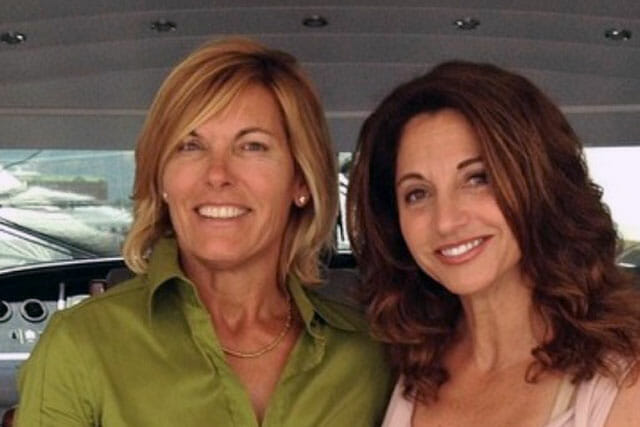 Claudia Potamkin (at right in photo) is a lot of things: a yacht owner, an entrepreneur, a philanthropist, an ocean advocate, a mother, and more. She doesn’t switch her proverbial hats according to the crowd she’s in, however. Rather, each aspect of Potamkin’s life dovetails with the others. A childhood spent canoeing with her father stimulated her love of nature. Cruising aboard larger boats as an adult, mixed with a yearning to be more environmentally responsible and a desire to teach children to do the same, inspired the creation of Global Oceans. Co-founded with Capt. Sandy Yawn (at left in photo), Global Oceans has Potamkin’s 72 Mangusta Defiance at its center. Global Oceans and Defiance treat guests to the expected luxuries of yacht charter, while remaining eco-minded. Defiance uses as many “green” products as possible. Furthermore, the yacht is a Vessel of Discovery with the International SeaKeepers Society. Disadvantaged youth cruise aboard to learn about ocean conservation. “The goal of Global Oceans is to educate, inspire, and evolve,” Potamkin explains, “bringing light to our oceans and children’s eye at the very same time.” She adds, “It’s about planting seeds.”

Megayacht News: How did you first become interested in boats and yachts?

Claudia Potamkin: I always had a fascination with the ocean. My parents used to take us to the beach as children, and I would splash happily in the waves and look out and wonder what was out there: “How could this wet stuff take up most of the planet?” I viscerally had an attraction and appreciation for the ocean. Mother Nature is just so generous with her riches.

Megayacht News: Is that the attraction of the yachting lifestyle for you—to be surrounded by the water, by everything that Mother Nature produces?

Claudia Potamkin: I spend a lot of time in the mountains, and cross-country skiing gives you access to places you can’t walk or drive. Water does the same thing. Another thing that I loved in the early days (of my boating experience) is that you could stay for an hour, or a day, or three days, or a week. You could come and go as you please. I liked anchoring because you would just stay and go; it was sort of a vagabond, free way to travel. It’s like a mobile hotel room: You go to sleep in one port and wake up in another. It’s a lovely way to see the world. Plus, it’s the people you meet. They all have such interesting stories. People who travel by water are adventurous by nature.

Megayacht News: Was there any pivotal moment that opened your eyes to the damage being done to the oceans?

Claudia Potamkin: It was in 1983, when (the artist) Cristo and his wife Jeanne-Claude put this polypropylene around 11 of the islands in Biscayne Bay. It was this artistic endeavor, and it was a big deal, and everyone was excited about it. Even though he got clearance for all of it, there was a lot of uproar from environmentalists: “How could you do this? This is endangering wildlife.” It didn’t matter because he had his permits, and it went forward. And I thought, “That doesn’t seem right.” To me, if something is even a question, the answer’s probably no. If you have environmentalists saying, “This is damaging,” then for the sake of art, go create something else. There are so many beautiful things you can create; why do this? So, then I started to think, “We are electing to do damage. How much damage is being done unconsciously?” It’s criminal when you see how people pollute.

The interesting tie between yachting and the ocean is the misperception that the big yachts are doing all the damage. It’s not true; it’s land-based. The yachts are the ones that can effect change. I always keep in my head, “What is it that we can do to take responsibility to make people aware?” Awareness is the first part of the problem. Once you are aware of something, chances are you’re going to change it, even if you don’t correct it 100 percent. 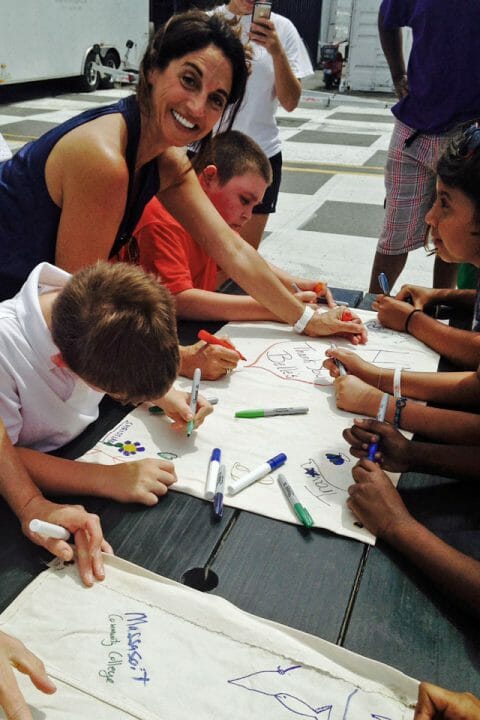 Megayacht News: What motivated you to go a step beyond donating to a cause? It’s a big deal to become actively involved.

Claudia Potamkin: Things always need funding; there are too many great things. A child starving today is probably more important than a fish that might be extinct in 100 years. But, in the biggest scheme, it’s all critically important. You have to teach somebody to fish, not give them a fish. It’s about educating, it’s about making people aware.

It’s easy to give money. I would never underestimate the importance of that. But in a way, if you’re giving money to somebody, then you’re preaching to the choir, because they’re already doing that good work. It takes somebody to change. We can’t change the world. I can’t change the way people treat the oceans. I can’t change the way people pollute. But I can change myself. If I’m able to do something differently, then maybe that will trickle out. When I talk to people about something that’s become more important to me, maybe they’ll think about it, too.

Editor’s note: The photo here is of Potamkin and a few children who joined her aboard Defiance for a hands-on SeaKeepers program. Among other things, they painted a drifter and launched it. The children also learned how drifters are tracked.

Megayacht News: Is that what also guided you to establish Global Oceans? It is a really different charter company.

Claudia Potamkin: It is. Sandy Yawn is a great friend of mine. She and I always talk about the importance of giving back and doing something good. So I wanted a boat, and I wanted to offset the expense, so we started chartering it. For Global Oceans…its life force is the education that it can deliver. To me, kids are really important. As adults, we’re kind of set in our ways, but you have to teach kids, the new generation. If we don’t teach our children, then we’re done. SeaKeepers is phenomenal, they just do such important work. With the Vessel of Discovery program, what I’m able to do is take kids out and teach them. The kids have fun; some of them have never been out on the water before. You put it in terms of what they can understand. You show them what plankton looks like under a microscope and the difference between something that’s clean and healthy and something that’s not.

There’s so much that can be done. The point is, it’s so easy to do. All you need to do is make sure your insurance is intact and take kids out and teach them and show them.