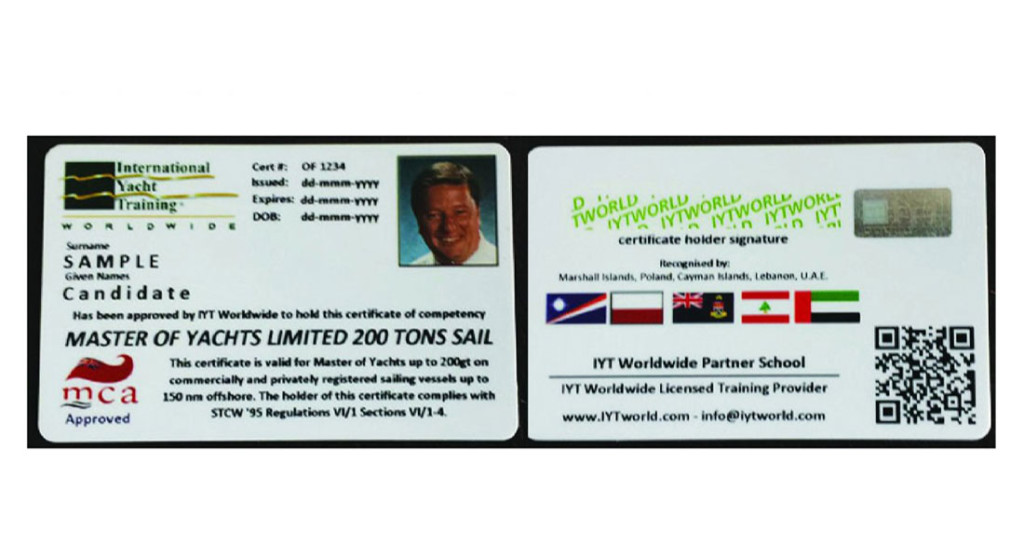 Crew-placement agencies, yacht-management companies, and more are increasingly encountering counterfeit marine certificates. Some of these are of such good quality that they’ve fooled a number of reputable yachting-industry professionals. Until, that is, a check of the school listed on the certificate reveals it doesn’t exist.

Every student who completes the IYT program either directly at its Florida facility or through its more than 200 partner schools worldwide receives a certificate with a QR code. The sample certificate above shows where the QR code is placed. Also note that there is a hologram. Yacht managers, captains, and more can quickly scan the code with any of the free apps available for smartphone download these days. Scanning the code takes you to a secure server containing IYT’s database of students. You’ll see verification of the student’s personal information. You can even learn who instructed the student and what school he or she attended.

Mark Fry, head of IYT, says that verifying the identity of students is practically a full-time job for one of his employees. “With the advent of high-tech printers and scanners, it is possible to make incredible reproductions of certificates,” he explains. “No one is spared from this, including the MCA, U.S. Coast Guard, ourselves, and many others. Some high-resolution fake certificates cost as much as $3,500 and are incredibly realistic.”

In fact, Fry says, one organization producing these counterfeit certificates called itself the International Maritime Organisation, or IMSO. “They even had a link on their website that said, ‘to verify the authenticity of this certificate, click here.’ Problem is, the same people also owned the verification website!” Fry adds, “We know of approximately 95 fake Master of Yachts 500 ton and Master of Yachts 3,000 ton certificates that these people have produced and sold to customers.”

Of course, IYT has reported phony certificate holders to the MCA and other governing bodies. Because the certificates need to be backed up by a passport or other legal document, the students have all used their real names. As you’d expect, justice has been able to be served. “The MCA have taken legal action against several individuals, including a trip to jail for an engineer,” Fry explains.

As an additional check, IYT has what Fry calls a  “wall of shame” on its website. The page lists students claiming to hold IYT certificates, plus schools and instructors claiming to be IYT affiliates.