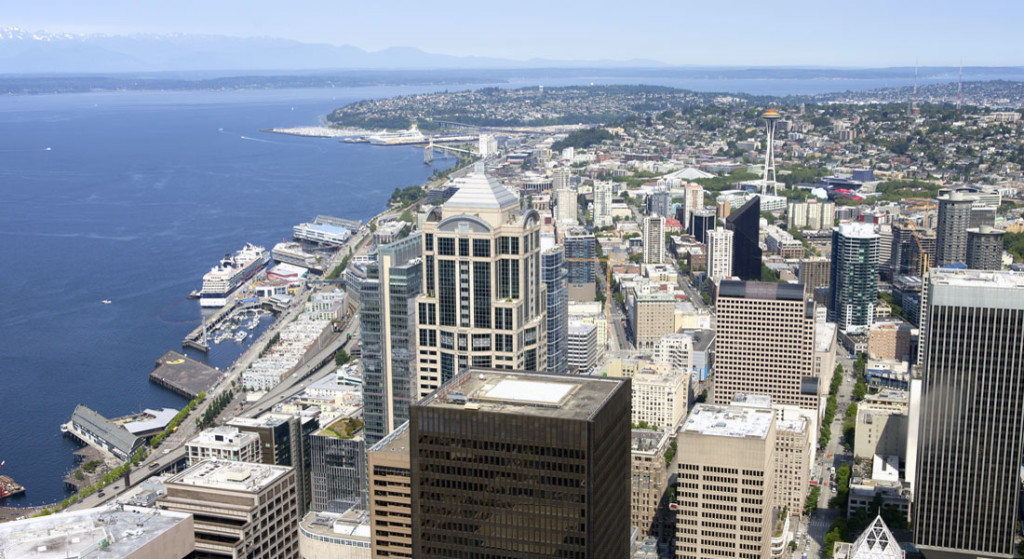 Tucked into the northwestern corner of the continental United States, Seattle, Washington is a city surrounded by spectacular natural scenery and great bodies of water. Protected from ocean swells, and with a kinder climate than often expected, it is the perfect place to explore the American northwest aboard a superyacht. Lake Union connects the deep-water harbor of Puget Sound to the west of the city, while Lake Washington is to the east. Even better, come September, yachts registered as LLCs can stay in Washington waters for 180 days before a 10-percent tax on their value is imposed. Previously, the tax was levied after 60 days.

Our media partner SYOG spoke to Skip Sethmann, captain of the motoryacht Daedalus, and Peter Schrappen of the Northwest Marine Trade Association about the reasons why they love cruising the area. They both share some of the sights and sounds that can be seen on a seven-day tour.

Seattle has a lot to attract superyacht owners, charter guests, and crew, but our favorite reason to visit would be the freshwater Lake Union. At the very heart of the city, there’s a lot for visitors to see and experience here. Plus, navigating the lake gives the boat a break from salt water and ocean growth, helping to flush out the systems.

It’s likely that you’ll arrive in Seattle after cruising warmer climes throughout the winter months. You may wish to set first anchor in Lake Union, or neighboring Elliott Bay, to take advantage of the ample dockside services available, and to allow passengers unhindered access to all that downtown Seattle has to offer.

Those heading ashore should start with a stroll through the 12-acre waterfront Lake Union Park, which celebrates the maritime and industrial heritage of the region. It offers watersports, festivals, and cultural exhibitions. Just beyond is the famous Space Needle, offering ticketholders a 360-view (below) of the Emerald City. 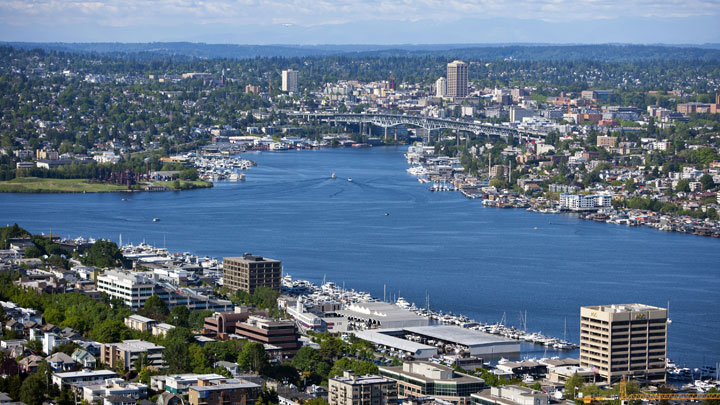 Starting out from your anchorage, we recommend heading southwest through Colvos Passage to Gig Harbor. Gig Harbor has great shopping and a buzzing waterfront culture that is easily accessed from the water by kayak or tender.

Grab a prime spot and people watch over brunch before heading off to the Blue Willow Lavender Farm or the Olalla Valley Vineyard and Winery, with its eight-acres of grapevines and berries.

After an overnight stay at Gig Harbor, cruise underneath the Tacoma Narrows Bridge (below) to Chambers Bay Golf Club. Tender ashore to play a round on this famous 18-hole course, which just hosted the 2015 U.S. Open. It’s a challenging course with some of the best scenery in Washington.

After a long day on the course, and post-round dining at the Chambers Bay Grill, get a good night’s rest before heading to the state capital in the morning. 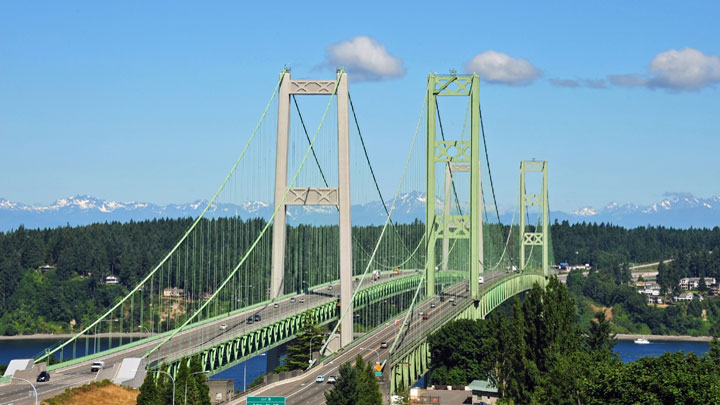 Start day three with a sightseeing cruise through the islands of Puget Sound, heading toward the scenic waterfront of Olympia, Washington’s capital. Once anchored, head ashore to soak up Seattle’s history, taking in the grand buildings, nature parks, and markets. Tour the Governor’s mansion and the Washington State Capitol campus before heading back to your yacht.

Return upstate, this time taking a slightly different cruise back through the Narrows. Moor in downtown Tacoma, where you can spend the day exploring the LeMay – America’s Car Museum, with its impressive range of American muscle cars, classic British cars, motorsport legends, and cars of the future.

Continue your return north via the east side of Vashon Island and anchor in central Seattle again, this time at Shilshole Bay. En route, stop by Blake Island for a picturesque hike and to visit Tillicum Village, which lets you experience the Northwest’s tribal culture. 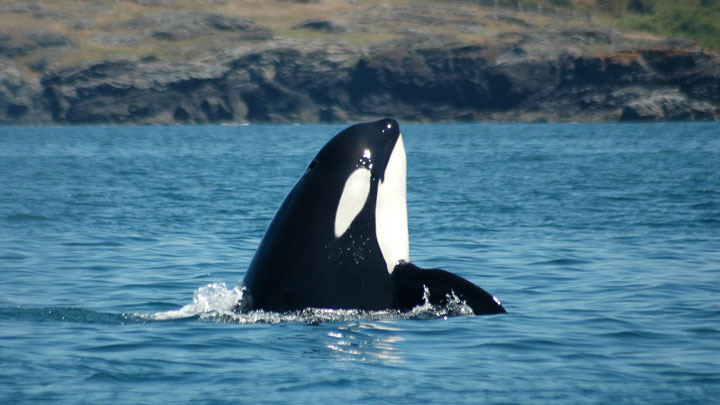 Today, head north to San Juan Island, with its deep green forests, country roads, and scenic landscapes. Port Townsend makes for a quick stop off on the way for shopping and lunch. Then cruise toward Friday Harbor, which, at just one square mile in size, is a quaint town on the east side of San Juan Island.

Everything here is within walking distance, but you could rent mopeds from Susie’s to tour the Pelindaba Lavender Farm and American Camp Country Park, which is home to the island’s longest stretch of beach. During the afternoon, visit Roche Harbor for kayaking or live theater in the woods. End the day whale watching at Lime Kiln Point State Park.

Ask the crew to pull the yacht around for you to board again for your overnight stay.

After a hectic few days, a day of fishing is in order. Try the west side of San Juan Island, where you can expect to catch halibut, salmon, cod, or shrimp. Those less interested in the pastime will be able to enjoy watersports here instead, using the yacht’s tenders and toys.

Once you’re done, your captain could use Deception Pass to return to Seattle as this is a particularly beautiful trip. Alternatively, Seattle is excellently placed for onward cruising to Alaska or Canada. Both Victoria and Vancouver are superyacht-friendly cities. Of course, since crossing into Canada involves customs and immigration, an agent may be in order. 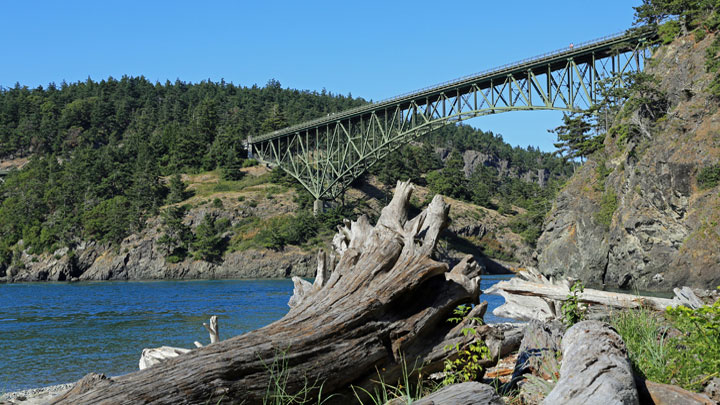 The standard cruising regulations of the States apply in all Washington cities. If coming straight from international waters, foreign-flagged recreational vessels exceeding 300 gross tons must file a Notice of Arrival with the National Vessel Movement Center (NVMC) prior to docking. This is a separate step than obtaining a Cruising License from Customs and Border Protection (CBP).

If in doubt, visiting vessels can contact the Office of Commercial Vessel Compliance, Foreign and Offshore Division, or enlist the services of a local yacht agent.

When navigating U.S waters, non-U.S crew must have B1/B2 visas. Non-American guests on board must have the B1 visa for business and the B2 visa for pleasure.

Since Seattle is a marine-centric city, happily, there aren’t many restrictions on where vessels can travel or anchor. However, you must understand the tides and currents in the region.

For those that prefer to dock in a marina, there are a few good options:

Tacoma: For your stop in Tacoma, Dock Street Marina easily accommodates superyachts up to 130 feet (39.6 meters).

Friday Harbor: The Port of Friday Harbor on San Juan Island provides 500 slips, with 100 slips available for overnight visitors. Larger vessels are often able to tie alongside the concrete breakwaters. Reservations are recommended during the bustling summer season.

Roche Harbor: Superyachts up to 150 feet (46 meters) can find berthing at Roche Harbor Marina, which holds a Colors Ceremony just before sunset everyday during the summer. During this ceremony, the flags of Roche Harbor, Washington State, Great Britain, Canada, and the United States are retired to music and a single cannon shot, before the resort’s current weather and events are announced.

Typically, the Pacific Northwest is known to have a wet climate, with rain in Seattle around 152 days of the year. Traditionally, the peak cruising season in the city spans May to September, when the weather is drier and temperatures average 69°F (20.6°C). Our favorite times to cruise are in the spring and fall, as there is less traffic. The average annual high in Seattle reaches 58.8°F (15°C), with the annual low at around 45°F (7°C).

Winter isn’t usually on the Seattle cruising calendar, but it’s not as harsh as many often expect, and can provide a nice time. The whole inside passage from Seattle to Alaska is protected from the ocean and its swells, and can almost always be cruised without a lot of concern for the weather.