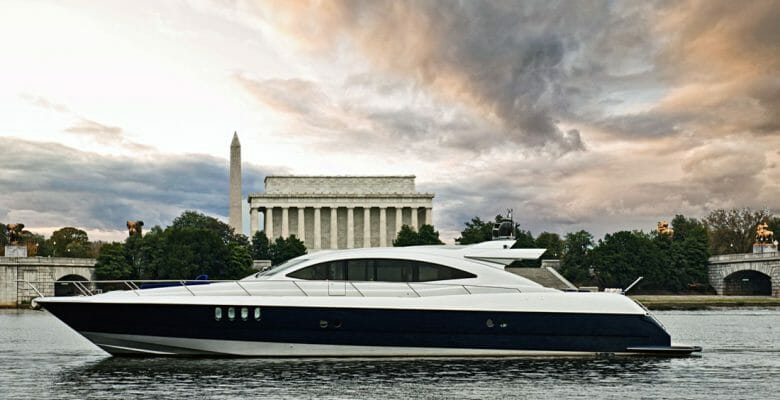 To paraphrase the poet Robert Frost, taking the road less traveled can make all the difference. While most charter yachts are heading to Florida and other southern climes ahead of the winter season, the 87-foot Moksha (above) is one of two yachts offered by Fleet Miami taking guests on half to multi-day history cruises through our nation’s capital and along the Potomac River. Experience some of America’s most historic lands via the decks of the yacht, with a renowned historian and lecturer onboard. Picture yourself enjoying a dinner cruise to see the monuments at night. Then, arrive in style for a private tour of Fort Washington or Mount Vernon. These and more are all possible. We spoke with Kathy Kennedy, Fleet Miami’s director of sales and marketing, who recently cruised in Washington, D.C., to find out more.

HALF- TO FULL-DAY TRIPS

Civil War on the Potomac. The Potomac River divided the North and South. The Union used it to supply its armies. The Confederacy, meanwhile, tried to close it off to shipping, plus crossed it three times to invade the North. On this charter, you’ll see many strategic places and learn why they were crucial to the war: bridges and fortifications, the Union occupation of Alexandria, Virginia the day after it seceded in 1861, the Confederate batteries built to blockade the Potomac, and the Union supply depot at Aquia Landing. On shore, you’ll explore beautiful Leesylvania State Park and the Confederate fortifications erected there.

Prohibition on the Potomac. Washington, D.C. went dry in 1917, though it was anything but a model city, with 3,000 speakeasies. The Potomac River was key in Washington’s defiance of dry law. You’ll explore brothels and Sunday saloons in Rosslyn, plus shootouts with the police on the 14th Street Bridge. See where bootleggers brought hootch by boat up the river and Navy nurses imported Cuban rum to the Navy Yard. You can even see a boat that served as a speakeasy. Hear first-hand about Congress’s chief bootlegger, George Cassiday, and how the 82-year-old Martin’s Tavern in Georgetown sold liquor in Prohibition’s last days. Of course, your yacht will serve as your personal speakeasy; you’ll learn to make cocktails such as the Rickey and the Scofflaw.

The Potomac Eco Tour. The Potomac is a wild river, a recreational delight, and a source of drinking water all rolled into one. On this tour, you’ll get a chance to see all sides.

Explore the Potomac’s many historic sites as well as its natural features, from the Three Sisters in the Potomac Gorge to Roosevelt Island, to the slowly healing Anacostia River. We can also arrange paddle boarding, fishing, or kayaking. Full-day charter guests will get the chance to explore a colonial mill and industrial site at Potomac Gorge. The buildings are where the Declaration of Independence and other important federal documents were hidden during the British burning of Washington in 1814. Another option: cruising to Great Falls and having a picnic near an amazing waterfall, then hiking the Billy Goat Trail along the edge of Mather Gorge.

Mount Vernon. Get a glimpse into 18th-century plantation life through 500 acres (including three beautiful gardens), intriguing museum exhibits, and immersive programs honoring George Washington’s life and legacy. Fleet Miami can arrange VIP tours such as a private evening candlelight tour of the mansion, accompanied by 18th-century-clad staff. Visit the workshops, the kitchen, the carriage house, the greenhouse, the slaves’ quarters, and, down the hill toward the boat landing, the tomb of George and Martha Washington. You can even lay a wreath on the President’s tomb.

Fort Washington. A VIP tour is possible here, too, built more than 200 years ago to defend the river approach to Washington, D.C. Even though concrete and steel from the 20th century have joined the original brick structure, Fort Washington is one of the few remaining Seacoast Forts in its original design.

Old Town Alexandria. From colonial houses to museums and to fashionable new restaurants, this quaint historic town just across the Potomac River from Washington, D.C. offers plenty. Alexandria boasts a number of art galleries, too. In fact, you’ll dock near the city’s visual arts hub, the world-famous Torpedo Factory Art Center. It’s a munitions-factory-turned-artistic-powerhouse, with three floors of studios and galleries.

National Harbor. This mini-city has risen over the past eight years on a long-empty site, home to more than 150 diverse shops and 30 restaurants. The newest attraction: the 180-foot (54-meter) Capital Wheel, built over the water and inspired by similar wheels in London and Paris. Take in the views of the river plus Washington in the distance.

Annapolis. This striking village and sailing center is well worth a weekend excursion. Rich in architecture, it’s built on a late-17th-century Baroque street plan. It’s further historically significant, where George Washington resigned his commission as Commander in Chief in 1783. The city even briefly served as the nation’s capital. A trip to the Naval Academy and a dinner of steamed hard-shelled crabs and Maryland crabcakes are musts. The fall is ideal to cruise around Annapolis’ creeks and coves, to listen to sea chanteys sung by musicians in historic dress, or to feed the brazen ducks.