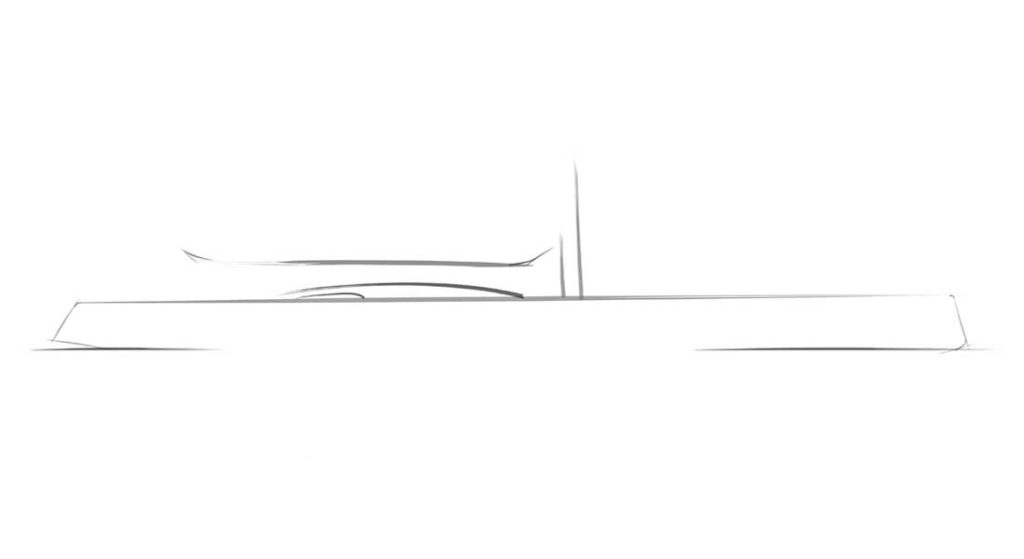 Measuring 195’9” (59.7 meters), Project 404 from Royal Huisman will be a substantial-size sailing yacht come delivery. What’s more, the shipyard promises “unprecedented performance” and a variety of technologies that are either new to market or still in development.

The owner of this sloop wishes to cruise the world while simultaneously enjoying spirited sailing. Furthermore, the owner is keen to incorporate ideas and solutions that will mark several firsts for yachting. Each of these is tied to Project 404’s performance on the water, as well as how efficiently she operates.

Some such firsts will involve her rigging, for example. Others, meanwhile, will involve her propulsion. While we do know that the propulsion is additionally a retractable design, Royal Huisman is so far keeping all details about the technologies confidential. It’s also not disclosing information about specific performance numbers, or efficiency parameters.

That also explains why the hint of an illustration above is all we can reveal of Project 404’s looks. They, along with naval architecture, come from Malcolm McKeon Yacht Design. However, some other details are available for publicity. For instance, Project 404 will feature Alustar aluminum construction for her hull, in combination with carbon composite construction for the superstructure. The sailing superyacht will carry gear from well-known suppliers such as Southern Spars and Rondal, too.

In terms of interior accommodations, Project 404 is for 12 people in the owner’s party, along with 10 crewmembers. The Liaigre studio is handling interior design. Similar to the pledged unprecedented performance, no specifics are yet available on the look and feel throughout the yacht.

Perhaps as a hint as to what’s to come, at least cruising- and performance-wise, the owner selected Gregory Monks as representative. Monks most recently served as the captain of the sailing superyacht Sarissa, for nearly eight years. Delivered in 2011, Sarissa was commissioned for adventurous cruising, including months-long family stays onboard.