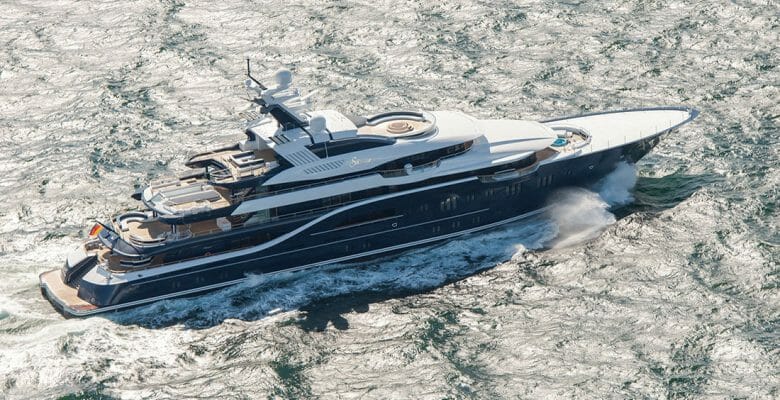 UPDATE, FEBRUARY 4, 2016: Show Management, the organizer of Yachts Miami Beach, has finally revealed that 25 megayachts will be at the Island Gardens Deep Harbor marina. You can also now search the event website, using the Yacht Finder tool, to discover which ones will be at that venue. Access to the yachts will be primarily appointment only, however, made through the brokerage firms exhibiting them. If you have an appointment with your yacht broker, you will have use of a complimentary private car, to and from the Collins Avenue displays, upon request.

Read on for the original story.

As mentioned previously, the Miami-based boat show long known as the Yacht & Brokerage Show is now called Yachts Miami Beach. As we have also mentioned, this year’s show, running February 11 to 15, includes a planned expansion of its displays. We can now confirm that this expansion, at the Island Gardens Deep Harbor marina on Watson Island, will see about a dozen megayachts in the water.

Under development specifically to attract megayachts, Island Gardens finished its first phase of construction in December. That phase saw the completion of floating docks for 50 yachts. The marina officially opened last month. Later this year, the ground breaking for retail space, restaurants, hotels, and residences should start, for completion in 2018.

The Yachts Miami Beach website has an Island Gardens site plan available for download. While it does not list which megayachts will be there, the following nine are among those inaugurating Island Gardens. We’ve listed them in alphabetical order:

You can reach the Island Gardens facility via shuttles from the Collins Avenue displays. VIP packages, which include scheduled yacht tours and a Yachts After Dark yacht hop, are also available. Check the Yachts Miami Beach website for details.