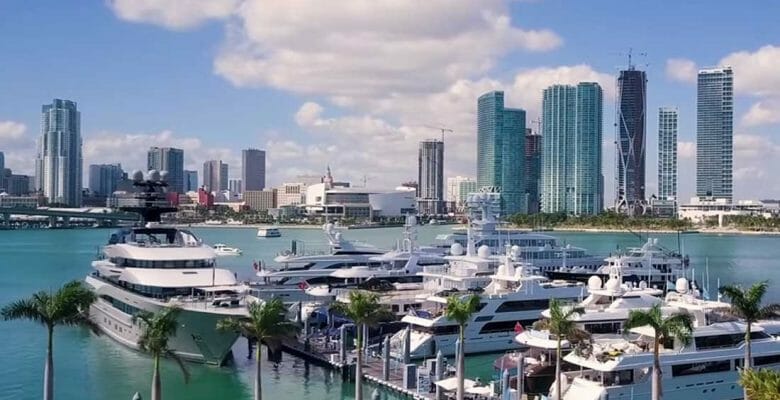 Situated on Watson Island, the marina is on city-owned property. Flagstone Island Gardens received a ground lease from the city in 2001 to develop it. Specifically, it planned to create two hotels, retail shops, restaurants, and the marina. The marina opened in early 2016, with 50 slips for yachts to 550 feet (167 meters) and with a water depth of 27 feet 8.2 meters). The following year, it began hosting the Superyacht Miami portion of the annual Miami Yacht Show. Excavation began in May 2017 to create a parking garage and the retail areas, with portions still in development. An entertainment arena is also under construction.

As Yacht Haven Grande Miami at Island Gardens, the marina will still see those yet-to-come amenities remain in the works. Mehmet Bayraktar, chairman of Flagstone Property Group, which owns Flagstone Island Gardens, says, “We are very pleased to enter our partnership with IGY Marinas.” He adds, “Once completed, the Island Gardens mixed-use project will be the centerpiece of Miami and on par with leading urban resort areas such as Monaco, St. Tropez, and Ibiza.”

In the meantime, Yacht Haven Grande Miami at Island Gardens still offers slips, along with services and conveniences like a marina lounge, a captain and crew barbecue area, a conference room/business center, and 24-hour security. On-site concierge services, customs and immigration assistance, and in-slip fueling are available, too. Additionally, the marina has water taxis to downtown Miami and some Miami Beach locations.

“Miami is one of the most important yachting destinations in the world,” says Tom Mukamal, IGY Marinas’ CEO. “The addition of Island Gardens Deep Harbour aligns with our strategy of continued expansion into the world’s most popular superyacht destinations.” Furthermore, he says, the site will host “a variety of curated superyacht events throughout the year.”