You are here: Home / Yachts / Motoryachts / Sandalphon Finally Seeing Completion in The Netherlands 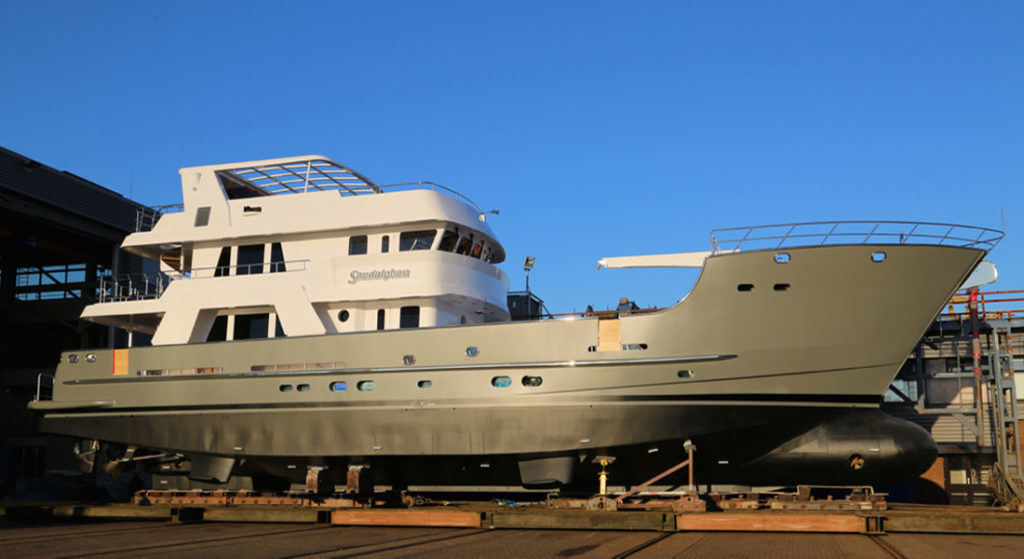 A German yacht owner is that much closer to taking delivery of a long-awaited explorer. This, following the yacht, to be christened Sandalphon, undergoing reconstruction by Holland-based Balk Shipyard.

Initially measuring 88’6” (27 meters), Sandalphon started construction in Brazil. In 2015, the owner shipped the partially-complete megayacht to Balk Shipyard, as the code-named project Gisele. There, Azure Naval Architects and the yard staff evaluated her more closely, once the yard stripped her back to bare metal. They determined that she needed more length to float better on her lines. Specifically, they recommended lengthening her 13 feet (4 meters), split between two areas.

“Split” is the operative word. Balk Shipyard cut Sandalphon in half, twice. The first split took place at amidships. Nearly 10 feet (3 meters) of the above-mentioned 13 feet went here. The second split affected her aft half. That section, once cut in two, gained the rest of the new length.

Sandalphon didn’t just grow. Balk Shipyard and Azure Naval Architects redesigned a variety of areas onboard as she started taking new shape. The studio handled interior arrangements and decor, too. Come delivery in late May or early June, the explorer will have an upper-deck bar from which the owner and guests can enjoy seeing approaching shorelines.

As you can imagine, the overall rebuild was no easy task. “Stripping down a yacht and rebuilding it again might be a harder job compared to a new build,” says Daan Balk, CEO of Balk Shipyard. Further noteworthy, the Sandalphon rebuild marked the first collaboration between the yard and Azure Naval Architects. That could have posed additional challenges. However, both parties credit the other with teamwork. “I sincerely hope we can make this a long-term cooperation,” explains Erik Spek, the studio’s managing director.