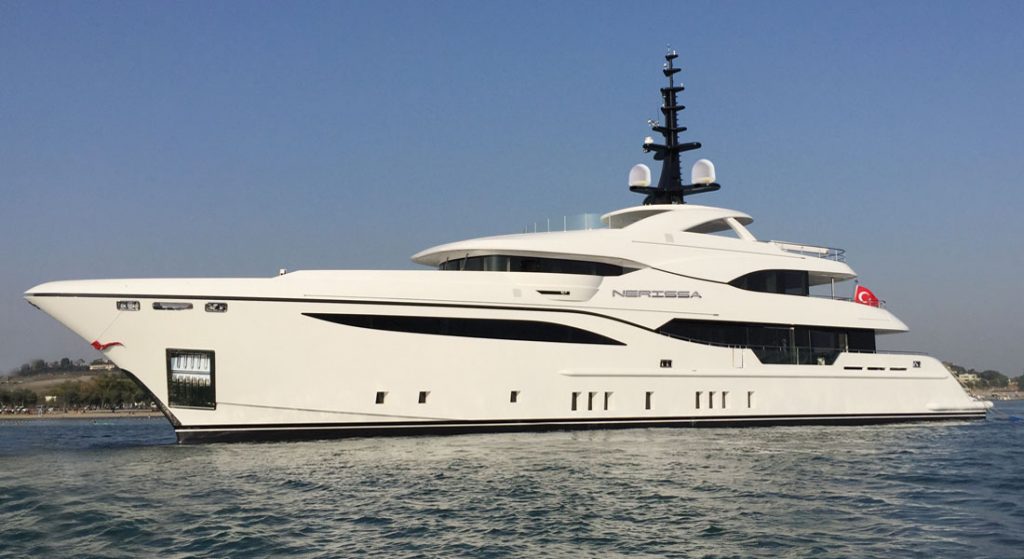 Meet the first member of the Bilgin 156 series, Nerissa. Conceived to offer something slightly different, she remains within the traditional tonnage limit that most buyers want.

The primary idea behind Nerissa: a smaller guest total. Typically, yachts in the 156-foot (47.5-meter) size range carry an owner’s party of 12. This usually sees a main-deck master and five staterooms below, in various configurations. Aboard Nerissa, however, there are four staterooms below. The idea came from H2 Yacht Design, responsible for the general arrangement and interior-design concept. It allows for more space for each of the guests.

The master suite is, of course, still spacious, too. Situated on the main deck, it has a balcony as well as a skylight to emphasize the sensation, and light. Photos are not yet available, but H2 Yacht Design created a rather minimal ambiance, based on a copper color scheme. The master stateroom takes up the full beam as well, 28’7” (8.75 meters).

Because buyers want to be close to the water these days while onboard, Nerissa features a beach club. Note that it doubles as the tender garage. But, Bilgin and Unique Yacht Design, which handled styling and naval architecture, created two side hatches for tender deployment. The beach club access is via a transom door.

To be run by a crew of eight plus the captain, Nerissa launched after 23 months in build at Bilgin’s Istanbul facility. The 499-gross-ton superyacht, with a steel hull, should make a top speed of 16 knots at half load under MTU power. Bilgin Yachts anticipates a best range of 4,000 nautical miles as well. Sea trials and final fit out are taking place over the next several weeks. Eventually, with an 8’2” (2.5-meter) draft, Nerissa should cruise the Caribbean, Med, and more.

Look for Nerissa at the Monaco Yacht Show. She’s available for sale.