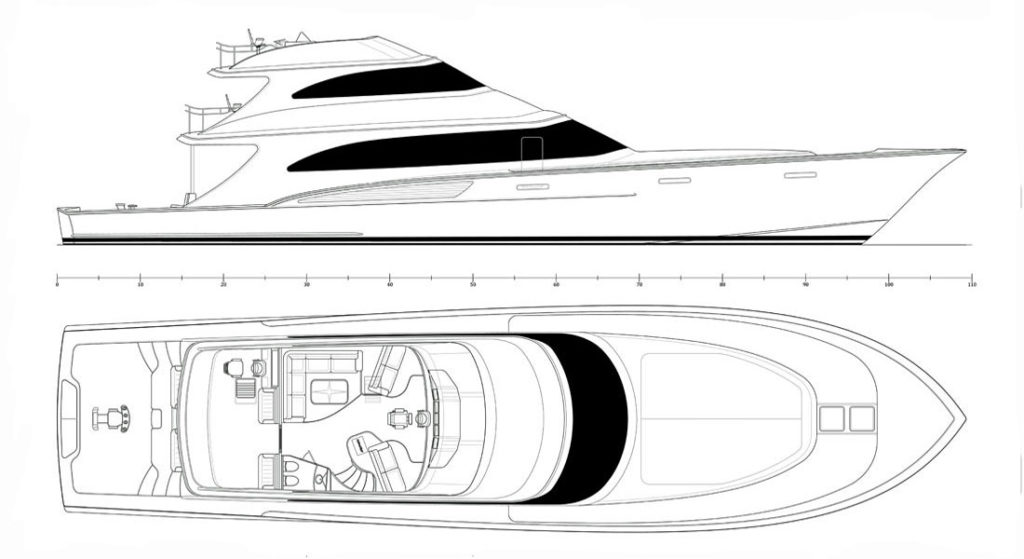 Move over, Jaruco. There might be an even bigger Jarrett Bay on the water in a few years. The Jarrett Bay 110 is serious about fishing the world’s hot spots. But, she’s equally serious about discovering places rarely visited. She sprang from the builder’s in-house teams, backed by well-planned-out systems and engineering. And, in Jarrett Bay tradition, she’ll be a custom build, therefore ready for owner input.

Interestingly, Jarrett Bay readily admits that it has yet to build a yacht this big. LOA: 110’9” (33.8 meters). It also has yet to build a yacht with an enclosed bridge. (An open bridge is, of course, an alternative.) Neither of those is stopping it. Consider, for example, that the 90-foot (27.4-meter) Jaruco, started as the code-named Project Ireland, was larger than its previous projects. Furthermore, Jaruco is the first superyacht sportfish anywhere to use carbon fiber. As for the enclosed bridge, it’s increasingly popular among anglers, particular in larger LOAs. It’s also just more practical for long-range cruising.

Also practical is Jarrett Bay’s construction approach. It specializes in cold molding, offering an attractive strength-to-weight ratio. Cold-molded construction is truly custom, too, since there’s no hull mold. With Jaruco, the yard gained more knowledge of carbon fiber composite construction. Therefore, the Jarrett Bay 110 will rely on those strength-boosting and weight-savings lessons. Simultaneously, she’ll deliver the power punch buyers want. Twin 4,600-hp MTUs should fulfill a speed-without-sacrifice requisite. (Final choice is, of course, up to the buyers, as is cruise and top end.) Combine these with 5,900 gallons (22,334 liters) of fuel and a 5’9” (1.8-meter) draft. The result? Few ports will remain out of reach.

The 270-square-foot (25-square-meter) cockpit makes her well suited for the biggest billfish tournaments. But, the Jarrett Bay 110 caters to straightforward cruising and relaxing. With a beam of 27’6” (8.4 meters), she has three decks for outfitting. Jarrett Bay’s designers suggest including a breakfast/snack bar below decks near the guest staterooms, for example. They also suggest a crew galley in addition to the traditional galley on the main deck, complemented by a big pantry. Finally, for pure fun, they designed a huge foredeck hold for watertoys—even a motorcycle.