Home / Yachts / Motoryachts / Explorer 40.22, for Family Who Cook & Cruise Together 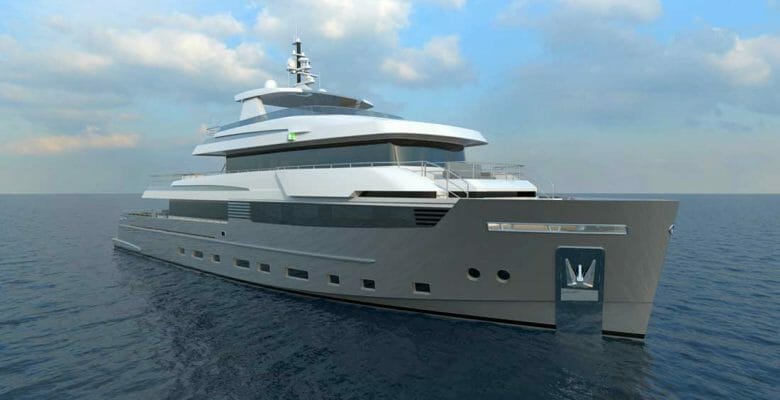 It’s no coincidence that an experienced yacht owner equally experienced in owning commercial ships wants a rugged explorer for future travels. That globetrotter, what Cantiere delle Marche coins the Explorer 40.22, is further for the owner and his family to get their hands dirty. Especially, it seems, in the galley.

This 138-foot (42-meter) megayacht plans to adhere to few cruising boundaries. With naval architecture by Hydrotec, the Explorer 40.22 should see 3,500 nautical miles at 10 knots with twin Caterpillar C32 ACERTs. Equally important, the Explorer 40.22 will carry substantial fuel. Total capacity is approximately 15,850 gallons (60,000 liters). In the more widespread, semi-displacement yachting realm, it’s not uncommon for a capacity closer to 10,000 gallons in this size range.

Therein lays one of multiple reasons why the owner turned to Cantiere delle Marche, for full custom construction. “He asked for a robust steel construction along with system redundancy and proven commercial-grade components to make his new yacht capable and reliable,” explains Vasco Buonpensiere, the yard’s co-founder and sales and marketing director. Having cruised aboard planing yachts previously, the owner wanted to pursue more far-flung vacations with family. Specifically, they plan to do so off the beaten track.

With a draft of 8’5” (2.6 meters) at full load, the Explorer 40.22 should further permit topping out at 14 knots. Sergio Cutolo, Hydrotec’s founder and chief designer, points out that this is higher than similar designs. That influenced other factors, such as the high-diameter, high-efficiency propellers. However, you’ll still find expected features like a bulbous bow.

Since the family may even get involved in operations, the Explorer 40.22 has a good balance of open areas. The 29-foot (8.5-meter) beam should serve common areas and the seven suites, including the owner’s stateroom, well. The same is true for the captain’s cabin and three crew cabins. We await seeing how the family will cook alongside (or, perhaps, instead of) the chef, though. As you can tell, there’s a balance between work and play areas, as well as between private and social spaces. “He asked me for a clean and simple silhouette and generous interior/exterior areas,” Tommaso Spadolini says. The designer adds that this is the third megayacht he has worked on for this owner. Spadolini is therefore ensuring the atmosphere “will pamper, delight, and entertain all onboard as they are on holiday.”

Expect delivery of the Explorer 40.22 in a few years’ time.