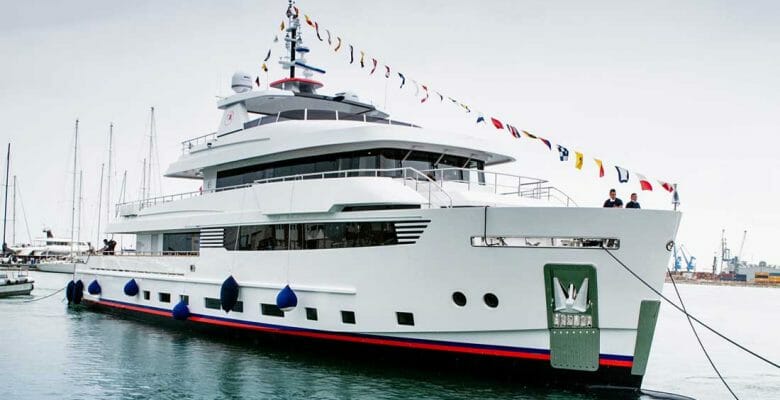 A family who looks forward to cruising far from the hustle and bustle of crowds celebrated the launch of their custom explorer megayacht, Crowbridge, at Cantiere delle Marche last week. Furthermore, they look forward to rolling up their sleeves in the galley, and perhaps at the helm.

Bearing the code name Explorer 40.22 while in build, Crowbridge sprang from the mind of an Italian client whose business involves commercial ships. He additionally has owned yachts. This, however, is his first displacement yacht. He was attracted to Cantiere delle Marche for the ability to have a steel hull and systems comparable to those aboard commercial vessels, though of course within a leisure-oriented envelope.

The styling and interior design aspects of that envelope come from Design Studio Spadolini. Not coincidentally, the studio has designed two previous yachts with this customer. “He asked me for a clean and simple silhouette and generous interior/exterior areas to provide him and his family plenty of spaces to spend long holidays,” explains Tommaso Spadolini. This description for the 138-footer (42-meter) may sound much like that of many yachts, Spadolini admits. However, the designer asserts that the owner had quite specific requirements for private and social spaces. “He is an experienced yacht owner, and he is aware of his family’s expectations and habits,” Spadolini adds. 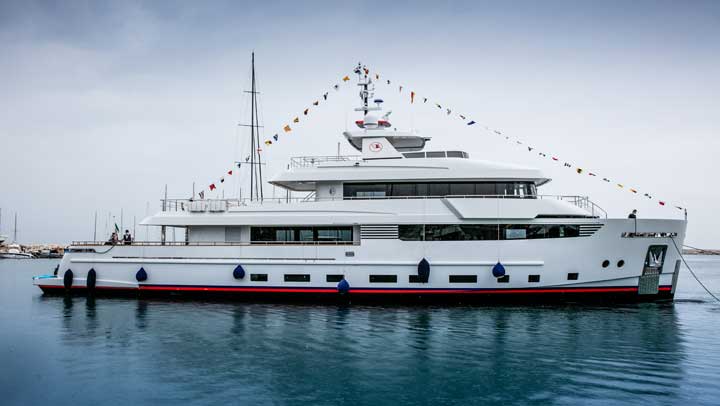 Therefore, within her 28-foot (8.5-meter) beam, Crowbridge has seven guest staterooms, as well as three crew cabins and a captain’s cabin. Despite a chef among the crew, none of the family members shy away from cooking. Neither do they shy away from other crew-oriented activities, according to Vasco Buonpensiere, Cantiere delle Marche’s sales and marketing director. Even with that, however, Spadolini says he wanted to pamper the family while they cruise.

Since those cruises include far-flung places, Hydro Tec engineered Crowbridge for a 3,500-nautical-mile range at 10 knots. Her twin Caterpillar engines should also allow a top end of 14 knots. Sergio Cutolo, Hydro Tec’s founder and chief designer, says that this speed is higher than similar designs. It additionally influenced other factors, such as the high-diameter, high-efficiency propellers.