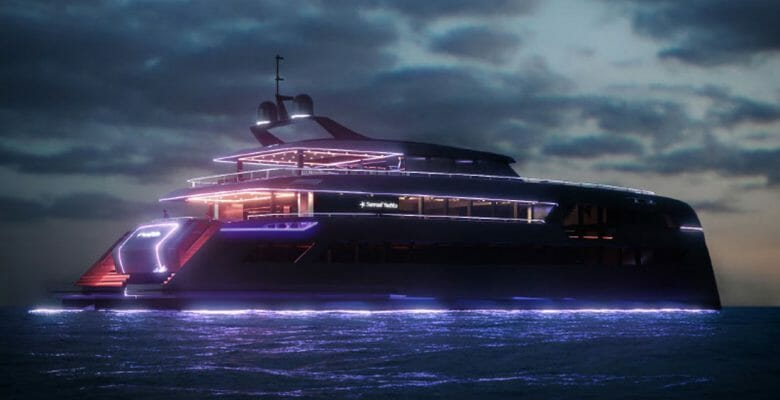 Sunreef Yachts has yet another new model in its power-craft line. She is the 49M Sunreef Power, featuring both styling and naval architecture from its in-house departments. At 1,350 gross tons, she will be the largest-volume project yet from the yard.

With an LOA of nearly 161 feet (49 meters, stated in the series name), the mega catamaran will be the largest yacht constructed in Poland, too. (Sunreef’s yard is in Gdansk.) The 49M Sunreef Power takes strong advantage of having a wide stance. Her beam is an incredible 55’3” (16.85 meters). That makes alfresco areas even more inviting than usual. Just forward of the wheelhouse, you’ll find one area that should get a good amount of use. Large groups can sit and relax, sip cocktails, or stretch out on sunpads here, for example. Down one level, and still forward, the owners get an exclusive patio-like area perched above the water. It’s nestled between the twin hulls, making it extra private. The configuration should shield it from strong breezes at times as well. 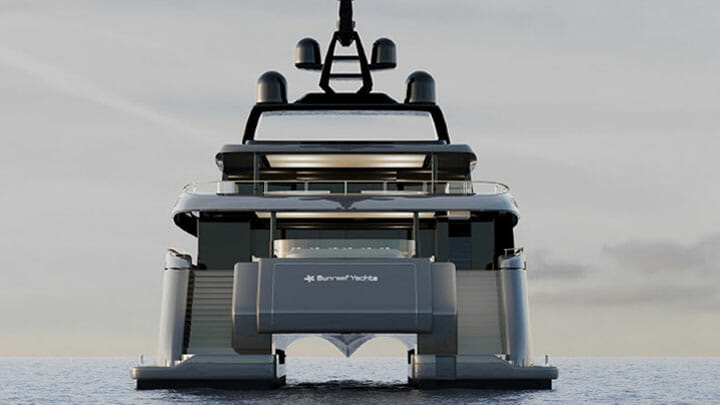 Certainly, the owners and guests will be able to take meals inside. But, the 49M Sunreef Power also has two large alfresco dining areas. One sits on the main aft deck, complementing a broad sunpad. The other is up one level aboard this trideck design. It is also tucked a bit more forward, benefitting from more shade and seclusion.

The shipyard hasn’t yet revealed interior renderings. Neither has Imperial Yachts, which is acting as the owners’ project manager. However, the 49M Sunreef Power is for up to 10 guests. She will have a strong crew-to-guest ratio, too, thanks to 17 crewmembers. Additionally expect a tender garage chockful of toys ranging from three tenders to several PWCs.

The yacht officially joins a Sunreef Power lineup that includes another recently signed model, the 110 Sunreef Power. Look for this particular project to begin cruising in the second half of next year.