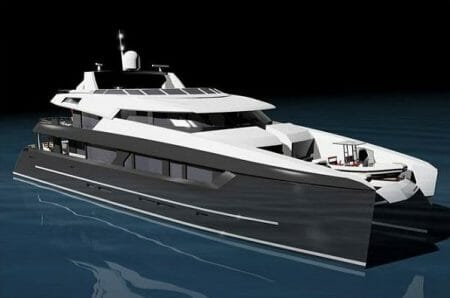 On the heels of delivering its first yacht to China, Sunreef Yachts has unveiled another new project, the 40-Meter Sunreef Power.

At 131 feet LOA, the yacht was developed through a collaboration with the naval-architecture team at BMT Nigel Gee and the interior designers at Design Unlimited. BMT Nigel Gee has widespread experience with high-speed catamarans, while Design Unlimited has worked on a number of different power and sail projects.

The “megacatamaran,” as Sunreef is referring to her, is a three-deck affair, with plentiful alfresco seating and sunbathing areas that are more expansive than those of traditional motoryachts in this size range due to the cat’s 11.8-meter (39-foot) beam. If guests are outside when the proverbial pedal is put to the metal, they’ll want to hang onto their hats. Sunreef is making the 40-Meter Sunreef Power available with engine options that’ll permit pretty swift speeds. Standard 1,920-hp engines should permit a 20-knot top end, but higher-horsepower options are expected to allow speeds to 32 knots and even 41 knots. The latter will be achieved with the addition of gas turbines and waterjets; the 32-knot option will also feature waterjets.

Owners will have good options in terms of layout, too. The lower deck is split between the two hulls, with the starboard one containing two VIP staterooms. If an owner so wishes, these can be converted into one large suite. The opposite-side hull contains all the crew areas: staterooms for six, the galley and their mess, a laundry area, and their own access to the foredeck.

Two more VIP suites are on the main deck, with the owner’s suite occupying most of the upper deck. The master bed faces aft, with a wall of glass providing great views of any anchorage. An L-shape seating area rims the room to starboard, also ideal for enjoying the view, while a vanity lies opposite. The suite further features an office and a walk-in wardrobe adjacent to the bath. An option up here: a private skylounge just forward.

Since yacht owners have really taken to the fold-down terraces being offered on so many builders’ models these days, Sunreef has equipped the 40-Meter Sunreef Power with one, too. Rather than being in the saloon, it’s in the gym—still on the main deck, though. The rest of the main deck doesn’t suffer, as the doors to the aft deck can remain open. The dining area, situated directly inside the doors, benefits the most from this, but the saloon (complete with a bar) is just a few paces forward, so it essentially becomes an indoor-outdoor spot, too.

For outdoor enjoyment, a pool is tucked right against the transom on the main deck. The tender garage can house PWCs and tenders, and additional tenders get stowed on the foredeck. If owners would prefer all toys being out of sight, Sunreef can add a garage to the foredeck.