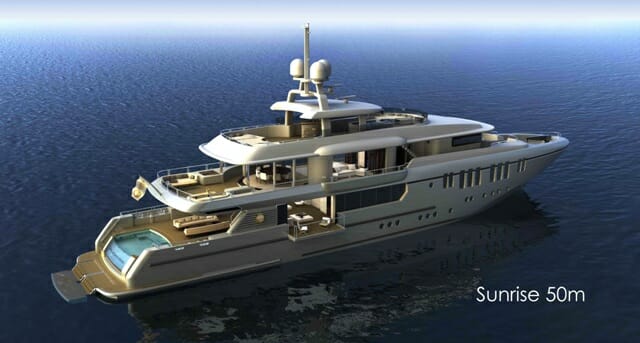 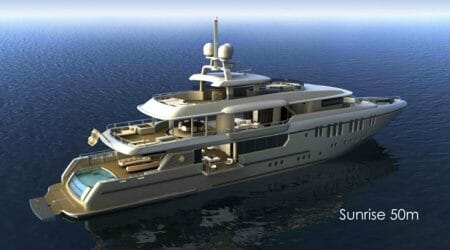 Sunrise Yachts has a new design it’s hoping will raise interest—and which is already raising a few eyebrows.

Designed in collaboration with Espen Oeino and Franck Darnet, the 49.8-meter (163-footer) megayacht seen here will accommodate 11 people in five staterooms, plus a crew of 10. The Sunrise 50m’s full-displacement hull, reportedly capable of a16-knot top end with MTU 4000 Series engines, is a time-tested element. However, two primary goals are quite different. The first is to provide far more natural light. The second relates to the first: provide an atypical layout that’s more in keeping with how people really use yachts.

As a result, there are more—and larger—indoor/outdoor spaces aboard the Sunrise 50m, enhancing the feeling of spaciousness from the nine-meter (29-foot) beam. The upper deck, for example, has floor-to-ceiling windows surrounding the dining area and skylounge. The windows can slide open on fair-weather days, and the dining table receives additional natural illumination via the glass-bottomed hot tub on the sundeck directly above. On the megayacht’s main deck, the saloon has sliding full-height windows aft and to each side, plus fold-down balconies. Sunrise and stylist Oeino deliberately eliminated an aft bulkhead, to keep the visual appeal and sense of being on the water stronger.

Another different layout feature of the Sunrise 50m: all guest staterooms on the main deck. The two VIPs and two traditional cabins benefits from extra-large windows. The same holds true for the master suite, fully forward one deck above, since it has three full-height windows. The master bath additionally has skylights.

None of these would be possible without devoting the Sunrise 50m’s entire lower deck to crew cabins and crew workspaces. And therein lies what’s been raising eyebrows, especially the way it was stated in the press release:

There is a convention that guests should be relegated inside the hull (where prisoners or slaves were in ancient times) and that some of the prime real estate of the yacht is to be sacrificed to services. … In a radical move for a yacht of its size, all services have been moved into the hull on the lower deck. This includes the galley, which becomes a large hotel-style stainless steel kitchen, as well as the captain’s cabin, which becomes a very comfortable “suite,” right next to the ship’s office.

Lest you think that Sunrise Yachts considers crewmembers no better than prisoners, I asked Jean-Claude Carme, Sunrise’s vice president of sales and marketing, about the statement. He said it was a deliberate exaggeration, “a bit of a provocation to see what reactions we would get.” I also asked why the team decided to place the captain’s stateroom below decks, far from the primary workspace of the wheelhouse and therefore seeming counter-productive.  Carme explained that Sunrise Yachts has had many conversations with captains about the very subject. “In the end, the majority opinion was that the captains would not mind going on the lower deck in exchange for a larger, more comfortable accommodation, as long as they would have a small cabin next to the wheelhouse for night watches,” he said.

The galley’s location is receiving a mixed reception. Since a provisioning hatch is adjacent to it on the megayacht’s port side, some clients and captains find the location acceptable. Other individuals don’t like the idea that dumbwaiters will have to transport trays two deck levels and that stewardesses will have to be ready to receive them. Carme’s explanation: “An elevator would obviously consume more space—which we may be able to do on the 54-meter version of this design currently in discussion with clients.”

The Sunrise 50m, which the shipyard expects to launch in 2013 to Bureau Veritas classification standards, will be promoted at the Cannes and Monaco boat shows next month.