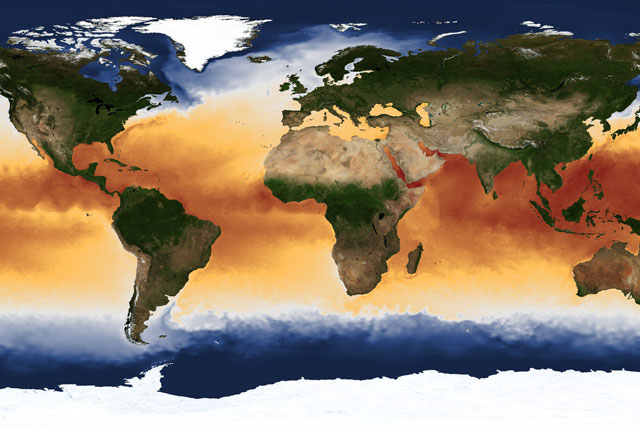 The International SeaKeepers Society is offering its own version of proven spherical drifters, called the SeaKeeper Drifters, to yachts and megayachts wishing to bolster the non-profit’s efforts in assisting scientists with ocean research.

Spherical drifters (left) are just what they sound like: volleyball- or even basketball-like devices that bob on the water’s surface. They’re further fitted with long, thin sections attached to drogues extending 49 feet (15 meters) down into the water. They gather information on sea-surface temperature, current velocity, the buoy’s GPS location, time and day, and compass heading via sensors. The drifters then transit this information via satellite to the National Oceanic and Atmospheric Administration (NOAA), which has hundreds, if not thousands, of these devices around the world. The information in turn helps forecasters better predict weather patterns, including hurricanes, and learn more about ocean currents and how ocean debris gathers in some areas versus others. The map at the top of this page is a good example of how the data collection is used. It was created in real time on the afternoon (Eastern U.S. time) of June 10 of this week, showing the sea-surface temperatures around the world at that particular moment. Blue indicates quite cold temperatures, while deep orange indicates quite warm temperatures.

The International SeaKeepers Society, which is partnering with National Marine Suppliers to distribute the SeaKeeper Drifters, is making these key data-collection devices more widely available to yachts and megayachts for the first time. It will be a big benefit to NOAA, as the International SeaKeepers Society says NOAA urgently needs more drifters outside of shipping lanes. Considering megayachts regularly venture to secluded ports and areas far from commercial ships, it’s a good match. In addition, according to the non-profit, NOAA needs about 1,000 drifters deployed each year, both to gather extra data and to replace existing devices. The drifters on average last nine months to a year, though some have operated as long as 18 months.

Deployment overboard is an easy task, given that the SeaKeeper Drifter buoy weighs just 40 pounds (18.1 kilograms) and measures 15.5 inches (39.5 centimeters) in diameter. The drogue measures about 17.4 feet (nearly 5.3 meters) and is two feet (6.6 meters) in diameter.

The SeaKeeper Drifter can be fitted with additional sensors, such as ones monitoring sea salinity and wind speed, should you so wish. Regardless, participation in the SeaKeeper Drifter program grants you a listing on the SeaKeepers’ website as a SeaKeepers Discovery Yacht (meaning one particpa) as well as a tax deduction, as the non-profit is a 501(c)(3) organization.

For more details directly from the International SeaKeepers Society on the SeaKeeper Drifter, contact the organization or fill out our contact form.